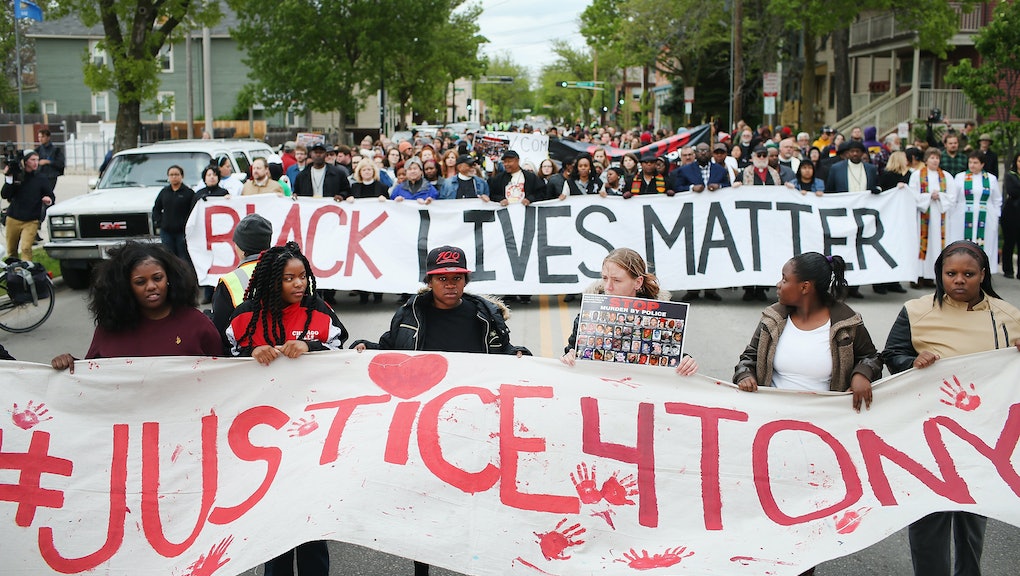 In One Quote, This 10-Year-Old Nailed What's Wrong With Police Brutality After Being Maced

Taye Montgomery, the 10-year-old boy allegedly Maced in the face by a police officer while peacefully protesting with his mother on Wednesday evening in Minneapolis, had a powerful response when he spoke to reporters on Thursday.

"At least I got Maced and not shot."

While Montgomery is biracial, he aptly identified the fears of many black males in America since the rise in racially biased police brutality, where white police officers often don't face criminal charges for shooting unarmed black men and boys.

An official investigation has been launched into the alleged, unprovoked police macing of Montgomery at a rally organized by Black Lives Matter and the Black Liberation Project against police brutality. The Wednesday night protest Montgomery attended was prompted by Tuesday's news that the white police officer who shot and killed an unarmed 19-year-old black man, Tony Robinson, in Wisconsin would not face criminal charges.

You can hear Montgomery's screams in this chaotic video:

During a news conference on Thursday, Police Chief Janeé Harteau and Minneapolis Mayor Betsy Hodges asked witnesses to step forward in order to aid their investigation into the incident. "It is critical for everyone involved that we complete a thorough investigation, so I need the public's help," Police Chief Harteau said, according to the Star Tribune.

Black Liberation Project, who helped organize the peaceful protest in which Montgomery got Maced, released a statement on their official Facebook page calling on the authorities to hold the police officer accountable:

"Chief Harteau, we demand a 'thorough investigation' AND justice for Taye and all the protesters who were Maced," the Black Liberation Project wrote.

Despite civil unrest regarding the repeated exoneration of white police officers who kill unarmed black men without much provocation, the country has yet to see any accountability. It remains to be seen whether continued public pressure will eventually shift the status quo regarding officers being held to account for police brutality. Perhaps Montgomery's distressing story will take the movement one step closer to justice.