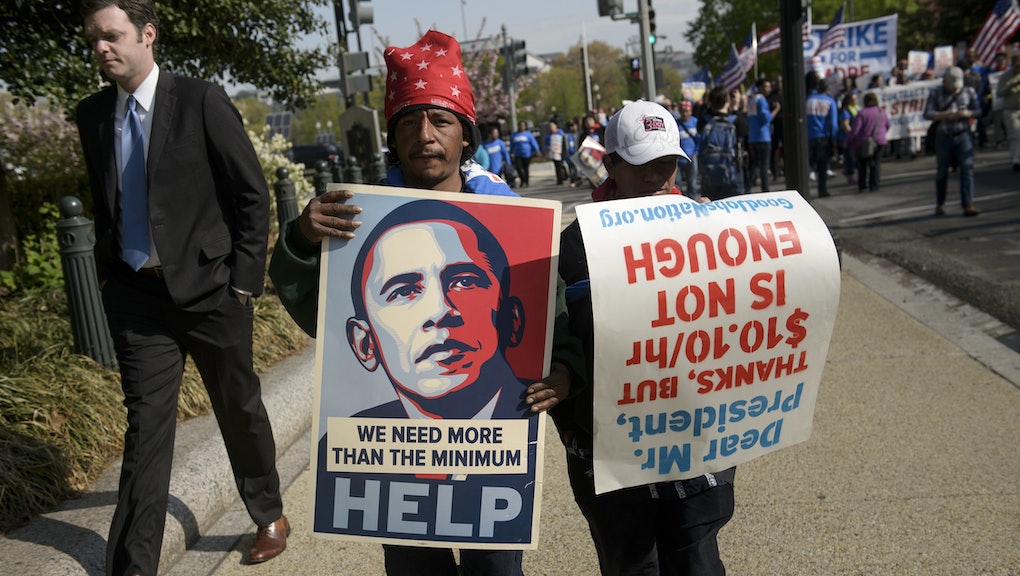 "Mr. President, the stroke of your pen can have transformative impact for millions of workers," the senators write. "As low-wage fast food, retail and federal contract workers continue to strike in growing numbers to 'Fight for $15 and a Union,' we urge you to harness the power of the Presidency to help these workers achieve the American Dream."

The request, obtained by the Huffington Post, calls on the administration to seek out firms "who pay a living wage, offer fair healthcare and retirement benefits, grant paid leave for sickness and care-giving, provide full-time hours and stable schedules, and give workers a voice through collective bargaining so they do not need to strike to be heard."

The faces of the "Fight": On April 15, low-wage employees from chains like McDonald's and Wendy's mobilized under the banner of the #Fightfor15 movement, which is asking for "$15 an hour and the right to form a union without retaliation." Organizers told Mic at the time that the protests reached 236 cities in the U.S. and 35 countries.

The senators began their letter by thanking Obama for a different executive order, signed after his State of the Union address in February 2014, which raised the minimum wage for federal contract workers to $10.10 an hour. Going forward, the senators are calling on the White House to "build on that momentum" and "declare that the federal government will invest our taxpayer dollars to incentivize model employers that commit to creating good jobs and to rebuilding America's ailing middle class."

Despite increased political pressure from a number of rapidly coalescing public movements and organized labor groups, the federal minimum wage for all workers remains at $7.25. In 2014, Seattle and San Francisco passed a $15 minimum wage in their cities, and four states, all Republican strongholds, voted in for legislation to boost their numbers in the 2014 elections. Still, data from the Economic Policy Institute shows how far the federal minimum has fallen behind inflation and worker productivity:

A bigger voice: "The federal minimum wage today is worth 25% less than it was back in 1968, even though minimum wage workers are far more educated and productive than they were decades ago," Amy Traub, a senior policy analyst at the think tank Demos, told Mic's Zeeshan Aleem last December. "It's not enough to live on, and it's not enough to support a family on, so it's no surprise that workers and their allies are organizing and calling for a raise."

Nearly six months into 2015, as the 2016 presidential election cycle spins into high gear, the ranks of workers' allies are growing in number and influence. Sanders, coauthor of Friday's letter with Sen. Dick Durbin (D-Ill.), has already shown his words can inspire significant policy movement from the Democratic frontrunner, former secretary of state Hillary Clinton. With Friday's letter, the "Fight for $15" now has a voice in American politics' biggest arena.