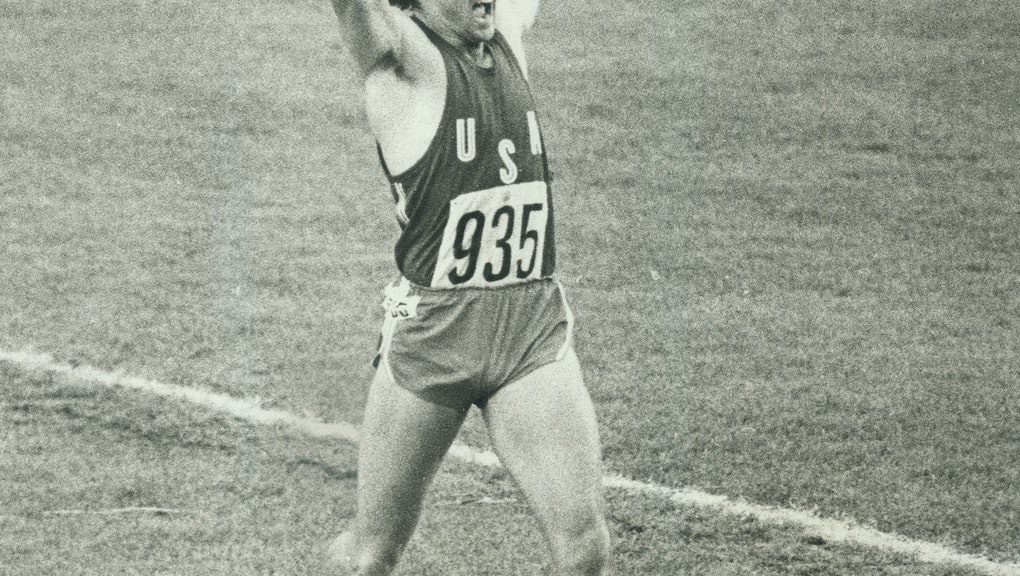 While the world dissects Bruce Jenner's gender identity and sexuality through a two-part series on E! this week, there's still one moment from his* much celebrated 20/20 interview with Diane Sawyer that no one is talking about: how Jenner used athletics to "run away" from his gendered body.

Holding up iconic images of the Olympic champion, Sawyer asked Jenner for a description of the person in those photos. "[I see] a confused person at that time, running away from my life, running away from who I was," he said, referring to a photo of him running the final race of the decathlon during the 1976 Games.

For Jenner, running in this photo represented a "running away" from his body, from his gender — as if he wanted to run out of his own skin. Perhaps it is precisely what he wanted; in his telling of his own trans narrative, he purposefully distinguished between the body and the soul: "My brain is much more female than it is male. That's what my soul is." Gender dysmorphia represents a sometimes radical schism between who the person feels themselves to be on the inside, versus what they and the world see on the outside.

One doesn't need to identify as trans in order to understand the simultaneous feelings of panic and disgust with one's body that Jenner expressed at that moment.

Jenner encapsulated the feelings I had as a former competitive athlete, in which part of me was always competing with myself. I was constantly fighting to get out of my own skin — I never felt never good enough, or beautiful enough, or fast enough or strong enough. The body that never became the Olympian.

Like Jenner, I used sports to turn my body into a machine. I learned, however, that the body can't be made into a literal machine.

Being a competitive athlete, regardless of the sport, demands that the body is trained to become something other than human. From the regimented daily workouts to enforced diet, the goal is to fashion the body for optimal performance. For athletes who suffer from gender or body dysmorphia, training the body to become superhuman, or other than human, is an ideal way to deal with the pain of being stuck in the body they have. While athletes are incredibly aware of their bodies, they also, in a way, aren't in them at all.

I fought, in vain, not to become a woman.

From my earliest memories around the time I was 4 or 5, I remember watching girls' bodies in the locker room after swim practice. My keen observation was not sexual, at least not to my mind, because I wasn't a lesbian yet. I was fascinated by the maturation of the female body at different ages. I noticed my friend Katie's curves in the locker room after the first swim practice of the season. She was a few months shy of 13. I had just turned 11. We were teammates, but when you're a swimmer, everyone is your competition — even you.

I recall girls around Katie's age and younger beginning to develop breasts and hips. The fascination was not sexual but born out of a kind of horror. I do not want that body, I thought. I do not want to become that. A woman.

Girls like Katie, I thought, grew slow and fat in the water. When they were younger, their race times were on par with boys' times. But at that age there became a marked gender difference in speed. Boys, who became even more angular through puberty, became increasingly faster in the water. The girls, not so much. Around this time, too, some of my female teammates quit the team and even started dating boys. I knew that if my body changed — if I grew breasts and hips — I would never become an Olympic swimmer. I had been practicing with 18-year-old boys since I was 8 years old, and, although I wasn't sure how, I planned to keep it that way.

Athlete as identity: My swimming career peaked the season before I started my period, two weeks after I turned 13. I remember crying furiously upon seeing the brownish blood in my underwear. The desire to scratch my way out of my body began at this age, and I carried my self-loathing through my mid-twenties. In college, when I quit competitive sports for good, I completely lost myself. My identity was that of an athlete for most of my life. I didn't know how to live.

I developed anorexia, which stopped my period for about 18 months. I refused to tell doctors that I wasn't eating, and, I believe, because they were men, they were blind to the root causes of my condition and instead tried to kickstart my period with three consecutive progesterone treatments.

Shortly after the third treatment ended, my anorexia swung into bulimia because I started eating again. Binging and purging became the new method of trying to exact control over my body. I quickly gained 100 pounds, a good portion of which, since I'm Italian, went to my hips, thighs and breasts. If I was uncomfortable with being a woman when I was a lithe swimmer, I was doubly uncomfortable as a plus-size twenty-something woman. As an athlete I at least had some connection to my body. That connection was obliterated by the fatty, sugary food I shoved into my body. Binging was an act of self-determination; I felt powerful through consuming everything in sight. Binging also is an act of self-obliteration. The body stops feeling — feeling full, feeling anything — when it is stuffed with sugar and fat and carbs. I didn't want to feel the outlines of my body in the world. I didn't want to feel anything.

The August before my senior year at college, I had a double-breast reduction. As the male doctor traced the new outline of my breasts with a black marker, I told him to make them smaller. "Cut them all off," I said. "I don't want any breasts."

I cried. While nothing came of it, the male doctor about to perform surgery on me interpreted this as emotional instability. Such is the treatment of girls, or women or anyone trying to claim full possession of their bodies in the face of the medical establishment. He finished tracing my new breasts — the ones that he thought were right for my body.

Nearly 15 years later, I still have boobs. They're smaller. Much smaller — an A or B cup, depending on where I'm at in my menstrual cycle. I still have scars, too. Scars around my areolas, that run vertical under my breasts, and that make a half-moon in line with my bra line. They are daily reminders of my past. With each new sexual partner, I've had to recount the history of my gendered body. I've had to field questions about how I can consider myself to be a feminist in light of "mutilating" myself. I've grown accustomed to these questions; they are now easy to answer, but still exhausting, like I can never "run away" from my past.

But it is a past that does not begin with the development of my eating disorders, nor is it located in my breast reduction. That past began before I was born — born in culture, in the historic treatment of women and of femininity that we are all subjected to.

Like Jenner, I have come to realize that my body is not a machine; it is human and I must respect it, love it and treat it with kindness. I can't run away from what it is, or what it will become.