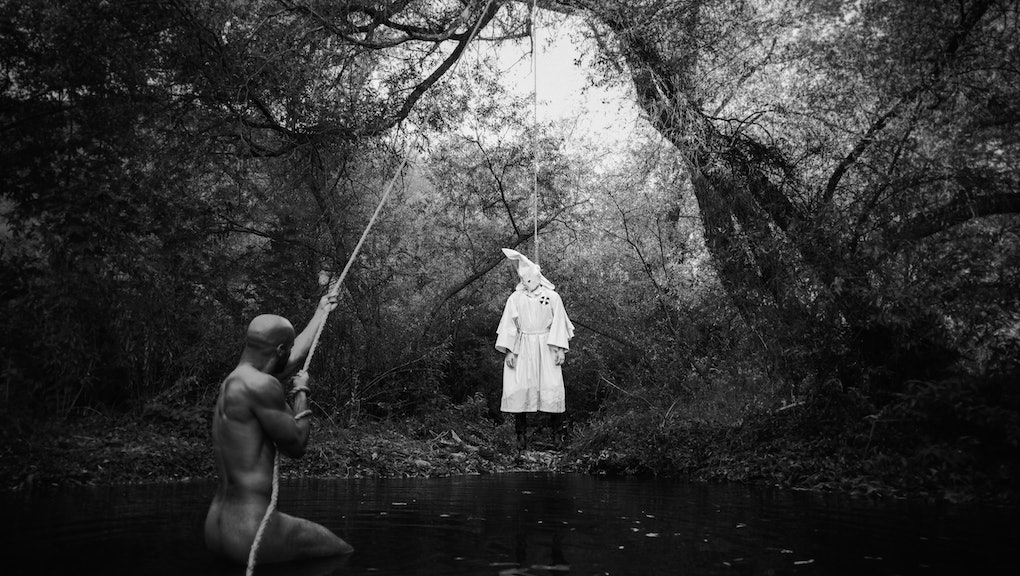 One Stunning Photo Is Turning America's Racist History on Its Head

The most polarizing photo of Tyler Shields' career shows a naked black man hanging a Klansman.

The Ku Klux Klan is not happy about it, Shields says. Nor are a number of his artist friends, who claim the image is so loaded with painful iconography that they worry how viewers will react to it.

"It was too much for them," Shields told Mic in an interview. "I have a photographer friend who looked at the image and freaked out: 'You can't put this out there. It's too crazy. It's too much.'

"[They] kept telling me, 'People are going to ask you too many questions,'" he said. "'I wouldn't even know what to say.'"

None of this fazes Shields, however; in fact, it's kind of the point. For him, the "challenge" of disseminating images like this lies precisely in not having a prepped explanation for what they signify.

"A lot of artists want an exact statement for everything they do," he said. "But I never want to not create something because I'm afraid of what it might say."

Even so, you might assume that the 33-year-old photographer from Jacksonville, Florida — who built his newest photo series around the civil rights era's most potent images and symbols — is at least somewhat politically driven.

You might also assume that he has much to say about the state of American race relations, especially since the high-profile police killings of black men and boys like Walter Scott and Michael Brown.

But you'd be wrong — to a point. For starters, Shields is clear about how little he follows current events.

"I live in my own world," he said. "I try to get my news the old-fashioned way, through word of mouth. So when it finally gets to me, it's usually already a big story."

And he's relatively adamant about his lack of political involvement.

"I think this is the first time I've commented on anything politically," he said. "I try not to be influenced by things."

Yet what may read as a convenient, even willful naiveté on the part of a white male "creative" in the most racially charged era in recent American memory gets complicated when you survey the rest of his work. In the past, he's courted controversy for making loaded images without mulling their consequences — anti-domestic violence organizations were upset by one 2011 series in particular, which they claimed made light of abuse.

But while his willingness to provoke, whether intentionally or unintentionally, has caused him some notoriety, it's not the biggest draw of his latest project. Historical Fiction — which goes on public display May 19 at the Andrew Weiss Gallery in Santa Monica, California — is, more broadly, about the collective trauma that violent events wreak on the American psyche.

What about that trauma, precisely, is unclear.

The Sept. 11, 2001, attacks were his starting point, he says, but this series — which he began work on months before the August 2014 killing of Michael Brown in Ferguson, Missouri — looks primarily at older historical events. Not all of them have to do with race and racism (though all the images included in this post do). But the ones that do often play with the idea of cultural role-reversal: How would viewers react if he presented black people as perpetrators of the violence that's been perpetrated against them for so long?

"One of the first things I thought about was that people are very quick to do whatever they want to other people, no matter how fucked up," he said. "It's like, OK, you like to hang black people. That's fucking disgusting. But if someone did that to them? Agh! It's the craziest thing. They can't handle it."

So in a sense, the clearest takeaway from Historical Fiction is this: "You shouldn't do it if you can't handle it being done to you."

It's a simple message, rooted in a number of the artist's own experiences — from the liberal use of the word "nigger" where he grew up to an article he vaguely recalls from his grandfather's copy of the local newspaper about a black police officer saving the life of a Klansman. As for the seemingly endless slew of black men and women being killed by America's police today?

The point of this being, most of what Shields has to say about these issues has to be read from the images themselves. "The work is my statement," he said, bluntly. "That's my take on it." But whether you love it, hate it, don't understand it or feel inclined to dismiss it, the potency of the images he's created is undeniable. The statement they're making might not be obvious, even to him. And that's exactly how he likes it.