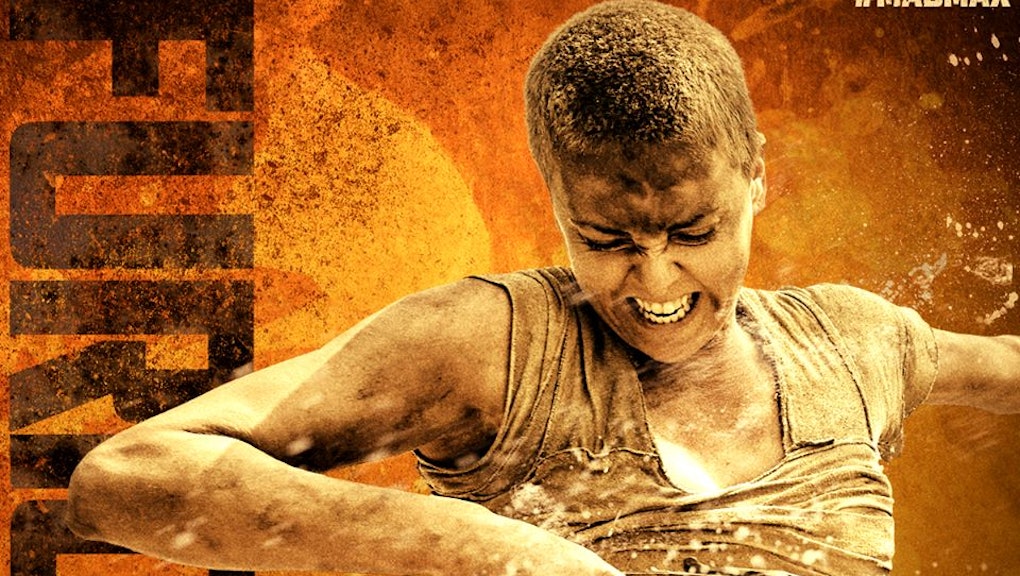 5 Reasons 'Mad Max: Fury Road' Is Definitely the Most Feminist Blockbuster of the Year

There's a reason a bunch of men's rights activists are urging a boycott of Mad Max: Fury Road. Its protagonist — the turbocharged, war machine-driving savior of humanity — is a woman.

Charlize Theron's Imperator Furiosa is a force to be reckoned with. She sets out to save a band of women imprisoned by Immortan Joe, an overlord who controls his people through fear and limiting resources. To Joe, humans beings are just bodies that supply milk, uteruses, muscles or blood. Together with Max (Tom Hardy), Furiosa and a group of Joe's escaped wives ultimately set out to save civilization (at least, as much can be saved in a post-apocalyptic world).

Not since Emily Blunt and Tom Cruise joined forces in Edge of Tomorrow have we seen such an equitable pairing between two people of opposite genders in a herculean battle to save humanity. Even more refreshing is the fact that Furiosa and Max share virtually no sexual tension. By the end of the flick, their relationship is one based on simple respect.

Having a strong female character at the top of this installment of Mad Max doesn't necessarily make it a "feminist film," but it ends up being so for many reasons:

1. It shows the destruction caused by a truly tyrannical patriarchy.

The start of the movie, taking place in a completely dried out swath of land, involves destitute people fighting over water. The world is dependent on a dwindling supply of gasoline. Most of the men in this world who aren't enslaved are restricted to a narrow, testosterone-heavy kind of manhood, providing brute force as Joe's "war boys" or drumming and guitar playing during car chases, while the women are purely baby- or milk-machines. Joe views human life as expendable, and his reliance on violence as a means of control limits the freedom of everyone in that society.

2. It deals with intersectional issues.

This film has a simple plot line; it is a two-hour car chase, after all. Yet it still acknowledges some issues that most action films wouldn't touch. These include ableism (Furiosa drives, fights and shoots with a mechanical arm), forced motherhood and lack of reproductive freedom (Joe has five "wives" and an army of women who exist to only pump breast milk for the upper class) and environmental destruction (to which many ecofeminists will say, the Earth is not an unlimited resource and neither are women). Nonetheless, one of the few faults of this movie seems to be the lack of people of color. As Toast, Zoe Kravitz is one of the movie's few brown faces.

3. The women build self empowerment through altruistic acts.

The motivation driving Furiosa to flee Immortan Joe's rule changes from simply wanting to return to her homeland (perhaps using Joe's women as collateral), to liberating the citadel where she was dragged to as a child by killing Joe and making water and crops available to everyone. Self-empowerment is great, of course — in fact, Furiosa's own motivations are what set off this entire plot — but using your own skills to empower and liberate others, as Max, Nux and the lead women in this film end up doing? That's feminism.

4. Every woman serves a purpose.

The earlier installments of the Mad Max series seemed to have all the traits of ridiculous '80s action movies, including gratuitous female nudity and a limited number of female characters with strong motivations or actions, particularly in the first two films. (Happily in Beyond Thunderdome, Tina Turner plays Aunt Entity, a ruthless tyrant. See? Women can be evil too, fellas.)

In Fury Road, however, even the damsels turn their distress into action. Each of the wives has innate capabilities and are willing to use their own muscle to fight. The pregnant Angharad (Rosie Huntington-Whiteley) pushes the limits of her own body to save the other women in a violent fight, and by the end of the film, Joe is taken down by one of his wives, Toast (Kravitz), and Furiosa through a dashing mix of strategy and satisfying violence. From the women Joe pumps milk from (who turn on the water pumps at the citadel for the masses in the end) to the all-female biker gang who help Furiosia and Max take down the tyrant, not one woman in that film is a thoughtless waste of a character or a stereotype. Each woman is varied and has her own motivations.

5. Even the filmmaking process had a feminist mission.

Director George Miller and cinematographer John Seale frame Theron as a true hero and an equal to Hardy instead of sexualizing her through shots that lingered on her skin or her body parts, as is the case in so many action flicks. The film treats all its female characters as more than sexual objects. Miller hired his wife, Margaret Sixel, to edit the film to help avoid doing just that.

"She had never cut an action movie, and she said, 'Why on earth would you want me to cut the movie,' and I said, 'Because if it were the usual kind of guys, it would look like every other action movie you see,' and she said, 'My job here is to stop you from embarrassing yourself,'" Miller said, according to the Hollywood Reporter.

Miller even hired Vagina Monologues author and feminist Eve Ensler to consult on set. Ensler, who's worked with women around the world who have experienced trauma, helped guide the outlook and motivation driving the varied female characters on screen.

"One out of three women on the planet will be raped or beaten in her lifetime — it's a central issue of our time, and that violence against women relates to racial and economic injustice," Ensler told Time. "This movie takes those issues head-on. I think George Miller is a feminist, and he made a feminist action film. It was really amazing of him to know that he needed a woman to come in who had experience with this."