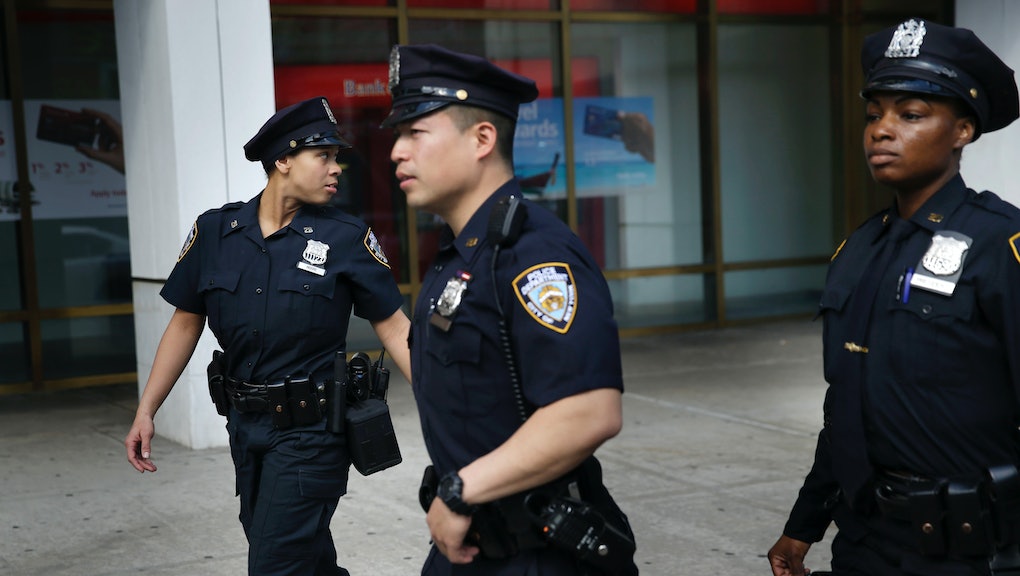 Police accountability activists have released a video recording of what appears to be New Yorkers successfully intervening in an arrest, freeing a young black girl from police custody.

According to the Free Thought Project, Copwatch Patrol Unit member Michael Barber said he saw two undercover officers attempting to arrest a 14-year-old girl around 7 p.m. Thursday on the corner of 140th St. and Hamilton Place in Harlem. The incident was "reportedly over allegations that a child who was with her, who witnesses say appeared to be around 7-years-old, had pushed the button on a police call box."

What happens next is astonishing. Members of the community repeatedly attempt to extricate the girl from police custody. The frustrated officers attempt to subdue the girl, but eventually give up when they realize the situation does not favor them. Instead of escalating the arrest, the two officers simply get in their car and drive away.

Barber recorded all of it, and clips pulled from a YouTube upload show the incredible response:

"You know you're doing wrong! Go home!" one of the women yells after separating the young woman from the officers. That's exactly what they do.

Depending on one's viewpoint, this is either an admirable community response to officers acting like bullies or yet another ominous warning that relations between police and the public remain extremely tense. According to Barber, it's a little bit of both.

"I was scared to put up this video at first because I was not sure if it would get the cops in trouble or the community but everyone was wrong at some point," he told the Free Thought Project.

DNAinfo reports that police unions have begun to back away from the angry rhetoric they used to attack New York City Mayor Bill de Blasio following an ambush in December that killed two officers. While the public tended to side with the NYPD, many thought the department's response to criticism after the death of unarmed 43-year-old black man Eric Garner in police custody was inappropriate. At the same time, Police Commissioner Bill Bratton has sought to increase the size of the NYPD by approximately 450 officers.

The 30th Precinct's Community Affairs office did not immediately return a request for comment from Mic.

Watch the whole video below — the intervention begins at around six minutes.