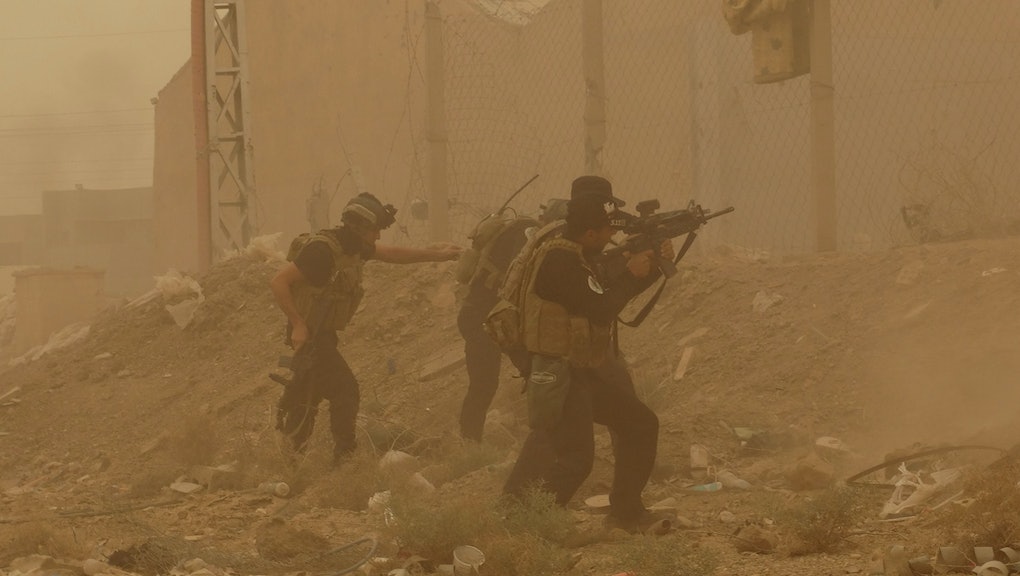 ISIS Just Took Over Yet Another Major Iraqi City

On Friday night, U.S. Special Operations units successfully pulled off a daring raid into eastern Syria that ended in the death of Islamic State commander and oil and gas operations manager Abu Sayyaf.

Just a few days later, however, Islamic State seemed undaunted in Iraq, where the group's fighters completely overran the last Iraqi military units defending the city of Ramadi. According to McClatchyDC, government forces abandoned their posts and fled from the besieged regional capital. Just a small force of several hundred troops and their officers remained behind to defend the Anbar Operations Center, a major government command post which was "repeatedly struck by suicide bombers and heavy artillery fire as militants cut off their last routes of escape."

"Only God can save us," one officer told McClatchy by phone before contact with the base cut out.

The background: The New York Times reports that the capture of Ramadi, about 80 miles west of Baghdad, is the "biggest victory so far this year for the extremist group" and marks the defeat of government efforts to resist the Islamic State's ongoing campaign to take the entirety of Anbar Province.

"Men, women, kids and fighters' bodies are scattered on the ground. All security forces and tribal leaders have either retreated or been killed in battle. It is a big loss," local tribal leader Sheikh Rafe al-Fahdawi told the Times. A government spokesman told Al Arabiya News that they believe at least 500 people, ranging from captured soldiers to civilians accused of being collaborators with the regime in Baghdad, have been summarily executed. Huge caches of military equipment, including small arms, armored Humvees and artillery, were captured.

The event is a repeat of another disaster last year in which approximately 30,000 Iraqi government troops abandoned their posts and allowed Islamic State forces to capture the cities of Tikrit and Mosul. While Tikrit has since been retaken, Mosul remains firmly under Islamic State control; the group is reportedly conscripting young men from the city into service.

What it means: It is quickly becoming clear that destroying the Islamic State will require more than just disrupting the group's momentum. Iraqi government officials are resigned to the long haul. In response to the devolution of the situation in Anbar, the Washington Post reports that the government is calling upon the aid of Shiite militias with ties to Iran and who previously battled U.S. forces during the decade-long American occupation of Iraq.

Meanwhile, American commanders insist that the capture of Ramadi is not as big a disaster as it sounds. Brig. Gen. Thomas Weidley, chief of staff of the U.S. command set up to run the American air campaign against Islamic State, told the Agence France-Presse that the group has historically had "episodic, temporary successes, but again these typically don't materialize into long-term gains."

"We firmly believe [the Islamic State] is on the defensive throughout Iraq and Syria," he said, adding that government forces remained in control of "most of the key facilities" disrupting the group's operations in the area.