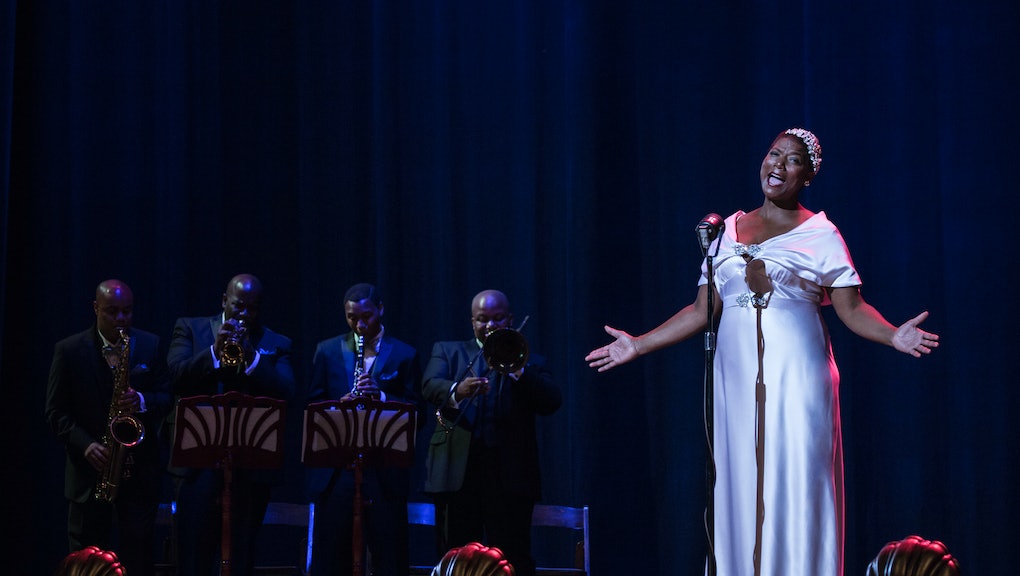 HBO's Bessie, which premiered last Saturday, is a gorgeous period piece. It tells the true story of Bessie Smith, a blues legend of the 1920s and '30s who struggles with being underpaid as a black woman. It shows her hiding her relationship with a woman behind a marriage to a man. It is, quite simply, about equality.

It shouldn't surprise, then, that Bessie is shockingly relevant in 2015. There are moments when it transcends period and strikes right at the heart of what's happening in America now. Anchored by two passionate performances, Bessie transcends being a decent HBO biopic and becomes something much more.

In an interview with the Daily Beast's Kevin Fallon, Bessie star Mo'Nique nailed exactly why the film seems so relevant today. In her words:

The outrage comes into play when you realize how ridiculous it is that these issues are still relevant. Why, 52 years after the Equal Pay Act, are women still paid 78 cents on the dollar? Why must Patricia Arquette still call for pay equality in her Oscar acceptance speech? This is 2015 — we should be doing better.

Arguably, the country is indeed making better inroads on equality for gays and lesbians. Marriage equality nationwide is seemingly just around the corner. And someone wouldn't feel the need to stay in the closet about their same-sex relationship now, would they? In fact, they would, as more than half of gays and lesbians remain closeted at work, according to a Human Rights Campaign study.

So yes, Bessie remains deeply relevant today. But how does it work as a film in and of itself?

Without Queen Latifah as Bessie and Mo'Nique as her mentor Ma Rainey, Bessie might have fallen apart. This isn't quite on the level of Going Clear or other HBO movies that could hold their own in a multiplex. Really, you're watching for the story of Bessie Smith and for those two performances.

But what performances they are. Queen Latifah brings incredible strength to her portrayal, particularly in one scene where she sits naked at the mirror for an extended period. It's vanity-free and tremendously evocative.

Yet the movie belongs to Mo'Nique. As Ma Rainey, she eases onto the screen quietly. She burns bright and wild, but her flame is contained. She has a restrained power that unleashes itself in full while singing. Bessie admires and desires Ma's control of her craft, and it's easy to see why thanks to Mo'Nique. It's a star-making performance, but of course, Mo'Nique is already a star. She's been mostly underserved in the years since she won an Oscar for her performance in Precious; that's twice now she's proven herself one of the industry's finest working actresses. Mo'Nique deserves the work to match that title.

The movie belongs to Mo'Nique. She has a restrained power that only unleashes itself in full while singing.

All of which is to say that Bessie is as entertaining as it is important. It's full of the same issues we should be paying attention to now, but in an easily digestible package thanks to the two core performances. It's the kind of movie HBO should make more of. They give women and people of color a chance to shine. That's always welcome in the world of entertainment, especially when the actors are as good as Queen Latifah and Mo'Nique.

Bessie is now available to watch on HBO Now and HBO Go.