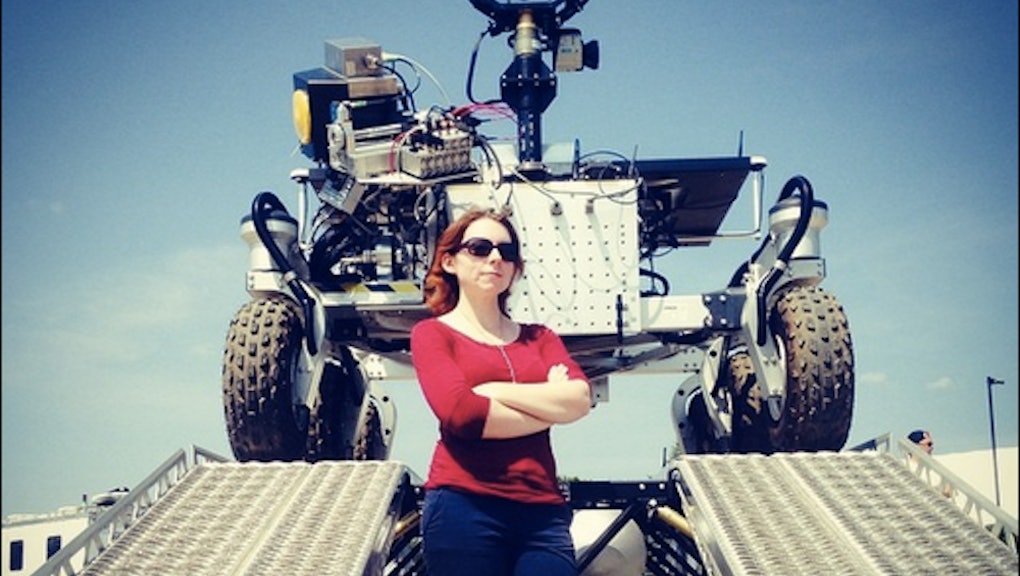 "Many scientists, I think, secretly are what I call 'boys with toys,'" California Institute of Technology astronomy and planetary science professor Shrinivas Kulkarni told NPR in an interview published Saturday. Kulkarni may have intended to counter the false assumption that science can't be fun, but in referring to these scientists as "boys" he erased an already marginalized population of the field: Women.

That's why female scientists took to Twitter to remind the world they may be underrepresented in the field, but they're doing crucial work — and having as much fun doing so as their male counterparts.

Tweeting back: In 48 hours, nearly 17,000 tweets were published under the hashtag #GirlsWithToys, according to the BBC. Female scientists from all over the world posted vibrant images of themselves with their scientific equipment, demonstrating exactly what kinds of "toys" are used in fields ranging from astrophysics to engineering — including microscopes, Mars rovers, dark matter detectors and more.

More than a hashtag: #GirlsWithToys isn't just a response to Kulkarni's comment. It also offers meaningful representation in a male-dominated field that can be hostile to women. Only 1 in 7 engineers is female, according to the U.S. Department of Commerce, and less than 1% of employed scientists and engineers are minority women, according to the National Girls Collaborative Project. A unanimous 100% of respondents in a recent survey of 60 women of color in science, technology, engineering and math fields reported experiencing gender bias in their careers.

#GirlsWithToys shows women actually working in these fields, perhaps encouraging younger women to follow suit. Media representation (or the lack thereof) has a meaningful impact on young women. Considering that studies show young women may even have a declining interest in STEM fields, such representation is certainly necessary. "You can't be what you can't see," founder and former president of the now-shuttered White House Project Marie C. Wilson once said. Thanks to the female scientists who contributed to #GirlsWithToys, there's plenty for young women to see — and, hopefully, they'll realize the many possibilities of what they can be.