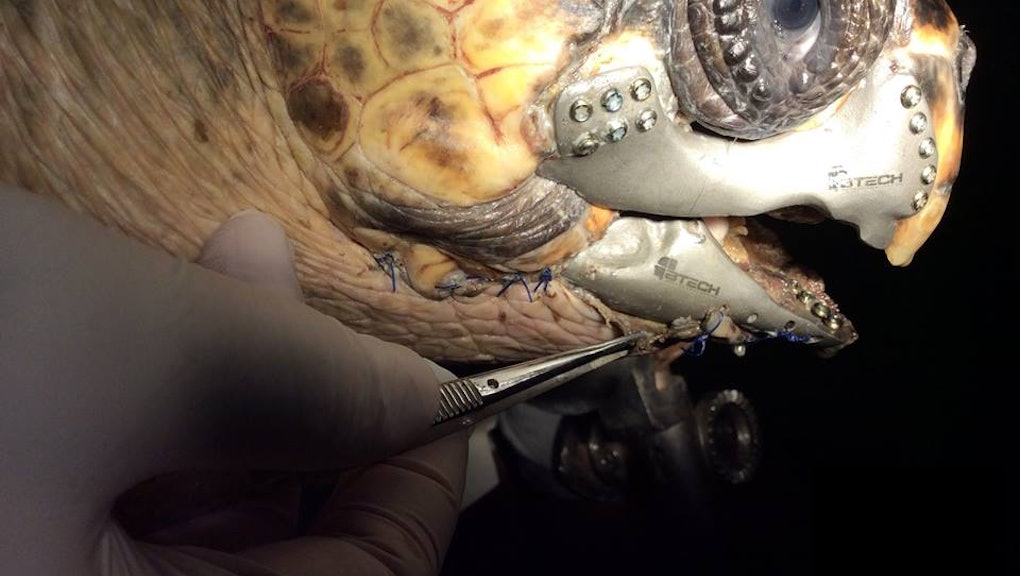 After a boat propeller sliced off a sea turtle's lower jaw and most of its snout, animal rescuers found the creature drifting nearly lifeless in the water in Turkey. The turtle was sent to a rehabilitation center where it recovered, but needed to be fed by hand to stay alive. Now, thanks to a Turkish 3-D printing firm, the turtle can eat independently again: It's the proud new owner of a titanium beak.

BTech, the 3-D printing firm, agreed to use the 100-pound animal's CT scans at the Dalyan Iztuzu Pamukkale University Sea Turtle Research, Rescue and Rehabilitation Center to create three-dimensional models for the animal's upper and lower jaw. With a team of surgeons and veterinarians, they were able to design a metal replacement that wouldn't encumber the turtle's eating and movement. After a long surgery, the team was able to install the replacement section of the beak, creating the first-ever 3-D printed replacement turtle jaw.

BTech's beak makes the turtle look like an awesome Teenage Mutant Ninja Turtles villain. It also makes it possible for the animal to eat and sustain itself alone rather than relying on humans for support.

Tech helping animals in need: This isn't the first time 3-D printing was used to help return an animal to an unassisted life. Last year, a dog named Derby was fitted with 3-D printed prosthetic legs to help him run again.

Derby, who was born with deformed front legs, used a set of wheels to get around, but they were cumbersome and restricted his range of motion. Derby's foster mother — and director of CJP Product Management at 3D Systems — Tara Anderson, along with a team of colleagues and an animal orthopedist, created a set of legs based on a loop design, which wouldn't get stuck in the mud and would have enough give to run.

While the advances in human prosthetics are constantly evolving, animal prosthetics are based on much simpler designs and can be implemented more cheaply. A few other animals are sporting 3-D prosthetics. This turtle, for example, has a 3-D printed shell:

Buttercup the duck gets around with a 3-D printed foot.

Last but not least, meet the Chihuahua with a 3-D printed roller cart.