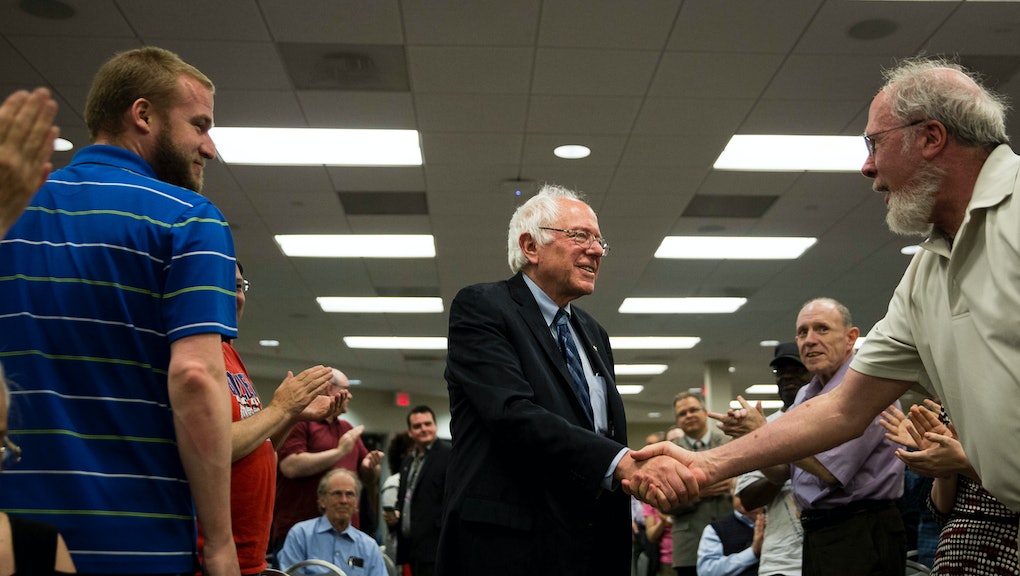 Bernie Sanders Wants to Make College Free for Every American

"We live in a highly competitive global economy and, if our economy is to be strong, we need the best educated work force in the world," Sanders said in a statement Sunday. "That will not happen if, every year, hundreds of thousands of bright young people cannot afford to go to college, and if millions more leave school deeply in debt."

The bill arrives a little more than a month after Sanders, speaking at American University, slammed Republican plans he said would inflate student debt — already the worst its even been — and eliminate nearly $90 billion in Pell Grants over the coming decade.

The model: On Sunday, Sanders again pointed to northern European countries as guidance for this ground-breaking proposal. He has embraced these governments before as a means of explaining his preferred "democratic socialism."

"Countries like Germany, Denmark, Sweden and many more are providing free or inexpensive higher education for their young people," he said in the statement. "They understand how important it is to be investing in their youth. We should be doing the same."

In January, President Barack Obama called for the cost of two-year community colleges to be reduced "to zero." Earlier this month, Hillary Clinton's campaign manager, Robby Mook, floated the idea of "debt-free college," which already has the support of likely Democratic presidential candidate Martin O'Malley, the former governor of Maryland.

With Tuesday's proposal, Sanders again ups the ante in what has become an increasingly taut political poker match with establishment Democrats. Clinton followed Sanders' lead late last week, when she told a group of donors and party officials that her administration would make overturning Citizens United a "litmus test" for any potential Supreme Court nominee. Days earlier, Sanders said the same thing during an interview with CBS News.

Dead end: "We used to lead the world in the percentage of our people who graduated college. Today we are in 12th place," Sanders said on Sunday, repeating a statistic he's made familiar over the past months. "We used to have great universities tuition-free. Today they are unaffordable. I want a more educated work force. I want everybody to be able to get a higher education regardless of their income."

Sanders will also include in the bill language to lessen current students' debt load and replenish federal funds for low-interest college lending. Republicans, who control both chambers of Congress, have yet to react publicly — but it's a fair bet the legislation, at least in the form it appears Tuesday, will never be brought up for a vote by Sen. Majority Leader Mitch McConnell.

A veteran of the House and Senate, Sanders is fully aware his plan is dead-on-arrival. The more optimistic view is that he has, again, succeeded in bringing a major issue facing young Americans into the presidential headlines. Now, rather than skating to the nomination as liberals in the Democratic Party had feared, Clinton will again be forced to address, eventually, how she perceives Sanders' more progressive policy initiatives.

And while much of the conversation is still focused on Clinton's shift to the left, there is just as good an argument — a more interesting and consequential one, really— that says Sanders is successfully moving his bold, liberal ideas into the mainstream.