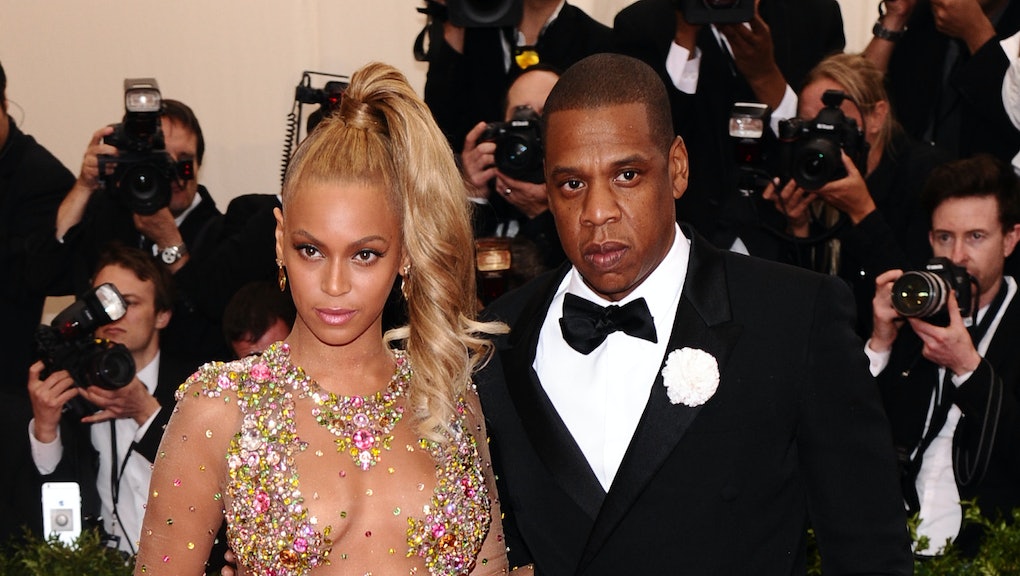 Over the weekend, Jay Z and Beyoncé had their cover blown. There have been rumors for a while that the couple have been supporting activists in Ferguson and Baltimore behind the scenes. Over the weekend, dream hampton, writer, filmmaker and coauthor of Jay Z's Decoded, alleged that the rumors are true. And they've done more than anybody thought.

In a series of tweets, she claimed that Jay and Bey have secretly been donating "tens of thousands" of dollars to help bail Ferguson and Baltimore protesters out of jail. She began with the invocation: "I'm going to tweet this and I don't care if Jay gets mad."

hampton also commented on the protests as a whole, arguing that one of the ways our justice system looks to quell unrest is by punishing protesters financially.

Eventually, it seems, someone on Jay Z and Bey's team caught wind of her rant and asked her to stop. She then deleted her tweets, but thankfully Complex managed to grab the screenshots.

What does this change? Though the act has yet to be confirmed, there is some strong evidence that the couple would do something like this. These tweets should help staunch some of the criticism Jay Z and Beyoncé have received over the years about not using their influence to help communities in need. Musician and activist Harry Belafonte took the couple to task in July 2013, suggesting that Bruce Springsteen has done more for the black community than they have. On the other end of the spectrum, racist Twitter trolls have been tearing them apart in response to the supposition of their actions in Baltimore.

But their humility and influence should more than counter those criticisms. Last year, Beyoncé's pastor let it slip that Beyoncé had donated $7 million of her own money over a period of years to build a housing complex for Houston's homeless. Shaun King, writing for the Daily Kos, claimed Jay Z quietly paid school tuition for the children of 2006 police brutality victim Sean Bell. King also seconds hampton's claim that Jay Z offered financial support "to people working on the ground in Ferguson," as well as supporting "justice for those discriminated against in the trans community."

In 2013, the couple quietly attended a rally for Trayvon Martin in New York before Rev. Al Sharpton blew up their spot. "Jay Z and Beyoncé said they didn't want to speak and they didn't come for a photo op," Sharpton said, according to Billboard. "Beyoncé put a beautiful message up on Instagram. Let me tell you that before a lot of you were down, Jay Z always supported us."

They're starting to show themselves. The couple have started to become more open about their activism — though apparently not open enough to allow dream hampton's tweets to remain. Beyoncé recently utilized her Instagram account and website to ask fans to donate to the NAACP to support their cleanup and recovery efforts. In one Instagram post, she included a provocative Time cover comparing pictures of Baltimore's 1968 protests with 2015's. The headline read "What Has Changed. What Hasn't."

In December 2014, Jay Z also publicly met with New York Gov. Andrew Cuomo to discuss police brutality and possible criminal justice reform. When Cuomo announced his intended reforms, which included the creation of an independent monitor to investigate incidents of police brutality when a jury issues no indictment, Jay Z praised them as "a huge step forward in restoring fairness, protection, sensitivity and accountability for all under our justice system," according to State of Politics.

The secrecy surrounding Beyoncé and Jay Z's activism speaks far louder than any announcements of their charity would. Giving in this way, they also don't distract from the movement itself, which requires the participation of everyone, not just the mega rich. But it is some comfort to know that Beyoncé and Jay Z are with us, whether we see their work or not.