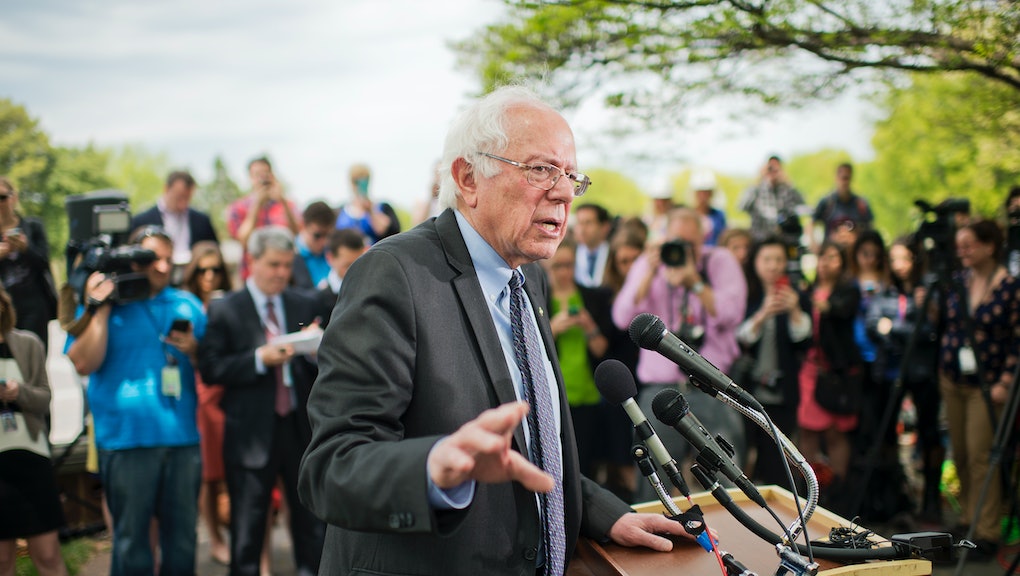 Bernie Sanders' Bold, New Plan May Have Just Locked Down the Millennial Vote

Sen. Bernie Sanders wants your votes, millennials — and with the introduction of his latest bill, he may have just clinched them.

On Tuesday, the independent senator from Vermont introduced the College for All Act, which would make attendance of any four-year public college or university free of charge for any American student who can meet admissions standards.

"We live in a highly competitive global economy and, if our economy is to be strong, we need the best educated work force in the world," said Sanders in a statement on Sunday ahead of the bill's introduction. "That will not happen if, every year, hundreds of thousands of bright young people cannot afford to go to college, and if millions more leave school deeply in debt."

The senator, a self-described democratic socialist who announced his candidacy for the White House less than a month ago, reaffirmed previous statements in support of European-style redistribution of wealth to provide for social services. "Countries like Germany, Denmark, Sweden and many more are providing free or inexpensive higher education for their young people," Sanders said Sunday. "They understand how important it is to be investing in their youth. We should be doing the same."

Sanders' bill addresses the root cause of student load debt: the disproportionately high cost of higher education. The legislation, an expansion of a proposal he floated in February that would have cut higher education costs in half, would provide $47 billion in federal funding per year to eliminate undergraduate tuition and fees at public colleges and universities.

"We used to lead the world in the percentage of our people who graduated college," said Sanders. "Today we are in 12th place. We used to have great universities tuition-free. Today they are unaffordable. I want a more educated work force. I want everybody to be able to get a higher education regardless of their income."

The issue hits millennials hard — and their wallets even harder. The cost of higher education has risen by 1,225% since 1978, according to Bloomberg News, a rate of inflation that outpaces increases in the cost of housing, food and even health care. Student loan debt has reached $1.16 trillion, according to the Federal Reserve Bank of New York, dwarfing national credit card debt to become the single largest source of non-mortgage debt in America. More than 7 million people are currently in default over student loans, at an average of more than $28,000 per graduate. The class of 2015's average liability is even worse: $35,000 per graduate.

This trillion-dollar debt load has peaked at a time when the job prospects of millennial graduates are less than promising. Although the labor market for college graduates is improving, according to researchers at the Federal Reserve Bank of New York, the unemployment rate for workers aged 20 to 24 is still at 9.6%, more than double the rate for so-called prime-age workers (ages 25 to 54). According to those same researchers, 44.6% of employed millennial graduates are underemployed, working in jobs that "typically do not require a college degree."

Since the Great Recession, the national dialogue around the skyrocketing cost of higher education has been one about "worth," i.e., whether a degree in art history is "worth" going into tens or hundreds of thousands of dollars in debt. Everyone from Ivy-educated "thought leaders" to the president of the United States have expressed this utilitarian view of postsecondary education, criticizing the decision by college students to follow their passions instead of simply major in engineering. (Honestly, Mr. President, we get enough of that from our moms.)

It's one of Sanders' biggest issues — and smartest bets. Sanders may be best known for his self-described socialism, rather than for being a realistic contender for the Democratic presidential nomination, but his passion and experience for student-loan reform is beyond reproach. A 24-year veteran of Congress, Sanders has sponsored the Student Loan Affordability Act, a bill which would extend subsidized federal student loan rates, as well as making employee educational assistance tax-deductible. He's also sponsored legislation that would make employee educational assistance tax-deductible for employers.

In May 2014, surrounded by indebted Vermont college students and graduates, Sanders announced that he was introducing legislation to help students earn college credits in high school in order to cut the amount of time they spend paying tuition costs.

Sanders' bill could make debt-free college the new 2016 litmus test for millennial voters. Lowering the cost of higher education was the single most important issue that would have increased turnout among Democrats in the 2014 elections, according to polling conducted by the Progressive Change Campaign Committee. An ideal bill, according to a paper by the PCCC and the think tank Demos, would feature federal aid to states to lower the cost of college tuition, need-based aid to qualified students and other cost-cutting efforts like standardizing transfer credits and eliminating physical textbooks.

The notion of debt-free college has already been on the periphery of the 2016 Democratic primaries. In an email to supporters, former Maryland Gov. Martin O'Malley declared that the party's "ultimate goal should be simple: Every student should be able to go to college debt-free." Robby Mook, Hillary Clinton's campaign manager, has highlighted the issue as one that needs to be taken up by "a champion for everyday people."

With the introduction of Sanders' bill, the pressure is only going to increase on frontrunner Clinton to detail an educational plan of her own. Last month, when Clinton spokesman Jesse Ferguson was asked about debt-free college, he said that the former secretary of state's student-loan plan would be rolled out "in the months ahead." As Sanders' bill gains political traction with voters (if not with the Senate's Republican majority), the Clinton camp may be compelled to take tuition-free college off the back burner.

Although Republicans have stayed generally silent on the issue of student-loan debt (beyond blocking consideration of Sen. Elizabeth Warren's bill allowing the refinancing of student loans), the response to Sanders' bill will likely feature cries of "socialism!" and "Scandinavia!" But for millennial voters, the "s-word" may not be the poison pill it once was: A recent Pew poll showed that 49% of of 18- to 29-year-olds view socialism in a positive light.