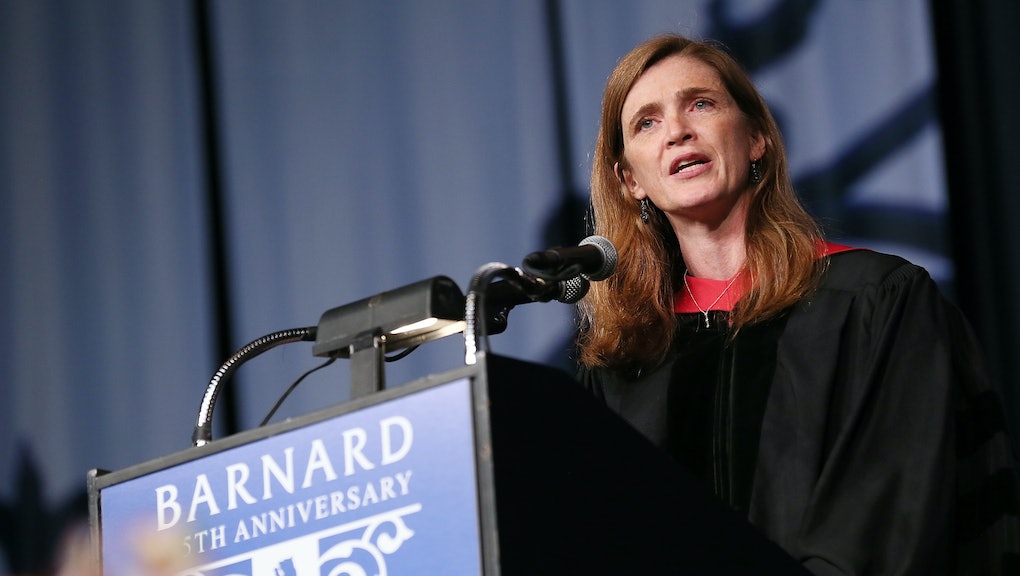 For United Nations Ambassador Samantha Power, international challenges like dealing with the conflicts in Syria and Ukraine are part of the job. Compared to these obstacles, her most recent task, imparting wisdom to the surely anxiety-ridden Barnard College Class of 2015 on Sunday as they transition into adulthood, seems simple. Sure enough, like with most challenges Power has faced, she succeeded.

Despite the vast achievements women have made in recent decades, many still experience insecurity, self-doubt and a crippling fear of making mistakes. Power dubbed this mental place the "Bat Cave."

She lived deep inside the Bat Cave, she admitted, when she decided not to tell her boss, then-Sen. Barack Obama, that she was pregnant because she was (ultimately incorrectly) worried doing so would impede her professional advancement. She said she again felt crushing insecurity when faced with making a decision about U.S. intervention during the crisis in Ukraine last year.

"The fact is that doubt — and his more lovable big sister, self-awareness — both are more pronounced among women," Power said. "Turns out Batwoman's cave often has more square footage than Batman's."

But women can't accept this, she told the crowd.

"True equality will not mean shedding our doubts or our self-awareness, but rather not letting them quiet us when we should be speaking up," Power said. "There are more than enough forces out there doing that without needing our help. And it will mean that, while everyone will have moments of uncertainty — and humility is an especially prized quality — women should not have to worry that if we stumble, it will be more noticed than when men do the same."

2. Lift up the voices of others who are marginalized.

Because women have been historically unheard and unseen, Power said they have a special responsibility to elevate the voices of others who are stifled from speaking up. "I think the burden of being treated differently is also our strength, because it gives us the capacity to notice when others are treated differently," she said.

Power specifically cited discussions about gender identity as emblematic of this. "We must recognize the cruel and hostile treatment that transgender people experience in so many communities," she said. "We must see that seemingly simple actions that most of us don't have to think twice about — the bathroom we walk into, the gender listed on our driver's licenses, the name people use to address us, the boxes 'male' and 'female' on a college application — can be a source of profound anguish for others." The point carries weight as Barnard is the only remaining college of the Seven Sisters with roadblocks toward admitting transgender female students.

Power said she has found this philosophy to be true on a global scale, which is why she begins meetings by asking other ambassadors about their upbringings and the pride they have in their countries.

"We know that America is stronger, that our policies are more effective and that the world is better off when America is listening," she said. "And that includes listening to countries and communities that often feel invisible to the world's superpowers."

Considering that the concept for Lean In was born during Google chief operating officer Sheryl Sandberg's 2011 Barnard College commencement speech, it's appropriate that Power invoked the concept for the same institution in 2015 — although the ambassador has a different take.

"When asked by friends whether I subscribed to 'lean in,' I would instead describe my philosophy then as 'hang on,'" Power said, recalling how she struggled to balance her duties as mother, wife and diplomat.

But she also believes it's crucial that women make these struggles visible and honestly share their struggles, rather than pretend as though they're effortlessly succeeding. Power led by example, and recalled the many times she felt torn between her son — who often begs for her attention while she talks on the phone with people like the U.N. Secretary-General or a fellow diplomat — and her job.

"He invariably storms off in a huff, usually grumbling some version of 'Ukraine, Ukraine, Ukraine!'" she said. "He's had it up to here with Ukraine."

4. Find ways to shed light on injustice in the world.

Making personal balancing acts visible is crucial, but so is making visible the "dark chapters of our own nation's history," Power added — citing the thousands of instances of lynching that occurred in the 19th and 20th centuries, as well as the Holocaust — as well as present issues like campus sexual assault.

"Even as we are aware of the seriousness of this problem, it takes a woman picking up a mattress and carrying it around her campus to make people really see it," Power noted, referencing Columbia student Emma Sulkowicz.

5. Be an example for others.

Power said watching her mother attend medical school as a child gave her the confidence to pursue her own dreams, and said this sort of visual inspiration is crucial for young people.

"That impact — that is what equality is all about," she said. "It is a memorial that forces us to see a dark part of our history. A woman who picks up a mattress to show us a problem we are overlooking. A woman or girl in a classroom or on a bike or in the water, clearing a path that otherwise would have seemed closed or unimaginable."

Closing out her speech, she asked the Barnard Class of 2015, "What will you make people see?"

While recent grads may not yet know what their impact will be, Power is certainly an excellent example to follow.