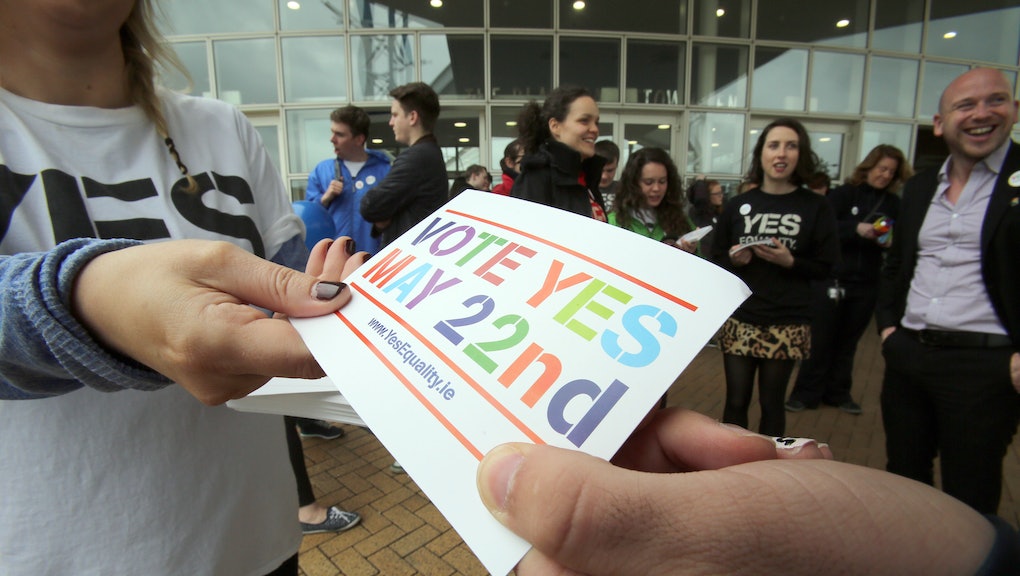 The half-island nation of 4.5 million people has historically been one of the most conservative countries in the developed world, with social mores largely defined by the influential Catholic church. However, many see even the existence of such a referendum as a seismic shift in the social landscape.

Early polls indicated over three quarters of the country were in favor of marriage equality. Yet as the vote gets closer, the margin is narrowing. Polls taken over the weekend show those in favor are still in majority, but much less comfortably, with the highest estimation at 69% in support and the lowest at 53%.

In comparison, in the U.S. gay marriage rights have been gained piecemeal, through state-by-state referendums and court decisions. However, in Ireland, the vote is going directly to the people, giving them, not the courts, the power to make the decision.

Meanwhile, many are trying to understand how Ireland, which is not known for its social progressiveness, became the first country to take marriage equality to a popular vote. Countries across Europe have had referendums on whether they should ban gay marriage, but Ireland is the first one to have a popular vote on whether they should institute it.

Follow the rainbow. Ireland's journey from conservatism to liberalism can be explained by the Catholic church, which, until recently, largely defined Ireland's social and moral code. Homosexuality wasn't decriminalized until 1993, and the first divorce took place in 1997, 14 months after it was legalized. Abortion is illegal unless the mother is suicidal or the pregnancy endangers her life. And when contraceptives were finally legalized in 1980 (including condoms), they were only obtainable via a prescription from a doctor.

But over the last decade, a wave of pedophilia scandals damaged faith in the church and its moral authority. Acknowledgement of the rampant sexual abuse and exposure of the Catholic church's attempts to cover it up and protect sexual offenders "set off the intense bout of soul-searching that has racked the country," reports the New York Times.

Given the country's history in reproductive and civil rights, one can appreciate the surprise at Ireland's orchestration of and support for this marriage equality referendum.

Does this say more about Ireland or gay rights? Of course, Ireland must be credited with its transformation towards tolerance, but the success of the marriage equality campaign in such a historically conservative country also demonstrates the power and reach of the gay rights movement.

International Irish celebrities, who invariably play a role in pop culture, have come out in favor of marriage equality, exemplifying both the social shift in Ireland and the growing global acceptance of gay rights. Hozier is the celebrity face of the organization Straight Up for Equality, and Colin Farrell, whose brother is openly gay, published a letter in Vanity Fair strongly supporting marriage equality and encouraging people to vote 'yes' on the referendum.

U2's Bono, who is also Irish, has been vocal about his support for marriage equality, too. "Think about it — trying to co-opt the word 'marriage' is like trying to co-opt the word 'love.' You can't own it," Bono told the Irish Independent. "Marriage is now an idea that transcends religion. It is owned by the people. They can decide. It is not a religious institution. As far as I know, Jesus wasn't a married man and neither are most priests [who are] talking about it."

While polls are optimistic, the combination of the drop in supporters as the referendum nears and the tendency for older voters to show up to polls more consistently than younger ones may upend what many are predicting is a sure thing. The media's positivity could ironically condemn the referendum to failure, giving young voters a false sense of security and therefore a reduced incentive to participate. Tor now, the opposing campaigns are waging with vigor and the world eagerly awaits Friday's results. Ireland has become the test case for taking marriage equality to a popular vote and, if successful, could start a new approach to codifying gay rights.