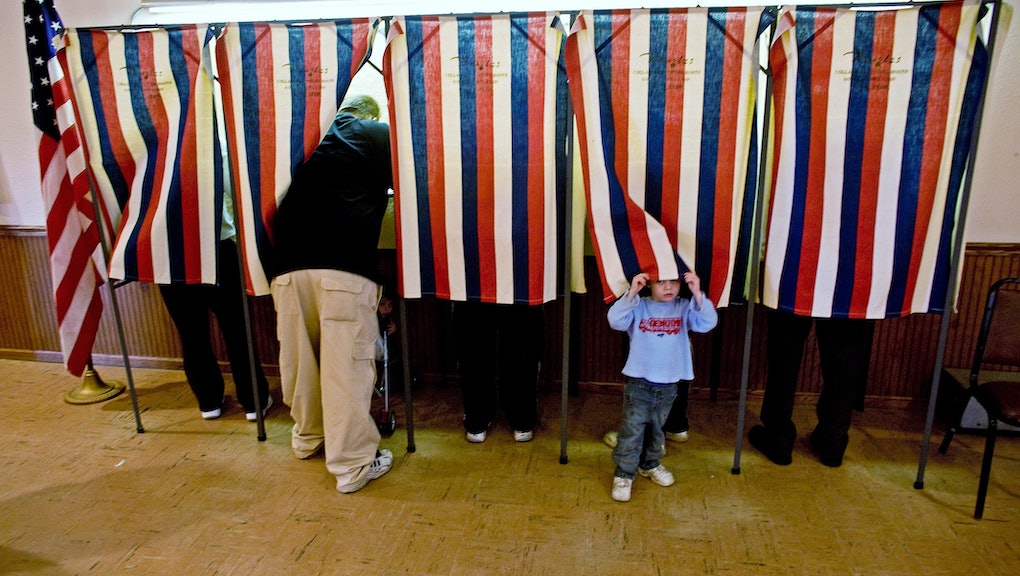 7 Other Nations That Prove Just How Absurd U.S. Elections Really Are

Is there a greater example of American excess than the presidential campaign process?

From the formation of exploratory committees until the inauguration of the next president, the American election frenzy lasts about two years, a vast majority of which is spent talking about little of substance. Along the way, the U.S. easily outspends every other country in the world, a trend that has only been accelerated by the gutting of restrictions on corporate contributions to campaigns in recent years. Hillary Clinton's 2016 presidential campaign could cost up to $2 billion, according to early estimates.

What's even worse is that the exceptional amount of time and money doesn't produce an engaging democratic process. The U.S. ranks near the bottom in terms of voter participation when compared with other developed nations. Issues like obstacles to voter registration and the ability to simply get to the polls without missing work contribute to strikingly low turnout in the world's most powerful democracy.

None of this is inevitable, and some of these problems could be easily fixed. Here's a brief look at some practices in other democracies that the U.S. could learn from, if not replicate:

1. The longest campaign in Canadian history was 10 weeks.

The election process in other countries is typically far shorter than in the U.S. Even though there isn't an official limit on maximum campaign length in Canada, the longest election campaign in Canadian history was in 1926 for 74 days — about 10 and a half weeks between when the date of the election was announced and voting day.

They're usually significantly shorter. Party positioning and discussion of election scenarios precede the official election campaign period, but it's a matter of months rather than years.

2. In the U.K., political parties can only spend $30 million in the year before an election.

Election spending is strictly limited in the U.K. Each party cannot spend more than $29.5 million in the year before the election. The New York Times reported that the combined spending of both major British political parties in 2010 came out to around the same amount as the American presidential candidates spent on money on expenses related to raising money in 2012.

Many democracies around the world place strict regulations or outright bans on how political parties can advertise on television. In Germany, parties are given airtime on two public television networks based on their performance in the past election and the size of their party, according to Politico. Each party usually only makes one minute-and-a half-long ad to convey their message during those slots.

Politico reported that in the 2013 election, this amounted to eight ads on each channel for the major parties — for the entire campaign. Parties can purchase more ads to run on private television channels, but limits on spending budgets and the high cost of television spots place huge constraints on their use. Negative ads are rare.

4. In 2013, over two-thirds of income to Norway's political parties came from the government.

Many countries successfully use public financing of campaigns as a way of regulating their cost and relieving the need for reliance on wealthy donors. In Norway's 2013 elections, 67% of political party income was provided by the government.

The U.S. does have a public financing system for presidential campaigns, but in 2008 Barack Obama opted out — the first candidate to do so since its creation in 1976 — citing concerns that it was a "broken" system and that the spending limits it imposed put him at a disadvantage against his opponent's ability to marshal corporate resources that circumvented its limits. In 2012, both presidential candidates opted out of the system.

5. Voter registration is automatic in Sweden.

Voter registration is one of the tedious details of the democratic process that has enormous consequences for election outcomes. In Sweden, the government automatically registers all eligible voters using data from the national population database.

The U.S., on the other hand, is one of few democratic countries in the world that places the onus of voter registration entirely on citizens themselves, leaving about a quarter of eligible Americans unregistered to vote. Most states do not allow same-day registration, which boosts turnout.

6. In Australia, voting is compulsory.

In Australia, citizens are fined a small sum of money if they don't vote, and if they don't pay that fine, then the penalty grows more serious. Since making it mandatory in the early 20th century, Australian voter participation has never fallen below 90%.

Compulsory voting diminishes socio-economic bias in voter turnout (typically poorer voters are less likely to vote) and allows campaigns to focus on messaging without nearly as much time and money spent worrying about mobilizing voters. Requiring citizens to visit the polls is certainly not every country's cup of tea, and is not without its major flaws — the question of forcing ignorant or apathetic citizens to choose candidates is a serious one. But it is effective in getting voters to the polls. Obama has even suggested that it would be an easier fix than reforming campaign finances in the near future.

7. In Brazil, Election Day is on the weekend.

Brazil votes on Sundays. The fact that people don't have to find a way to skip work or school when voting is likely one of the reasons that Brazil has a significantly higher voter turnout rate than the U.S., which votes on Tuesdays and has limited early voting options.

In the U.S. there have been calls for weekend voting. The current calendar was designed in the 19th century to accommodate voters who relied on horse and buggy to get back from the polls before market day on Wednesday.

These are just a handful of examples of differences in the way elections are conducted around the world that could provide some valuable insights into how to make American democracy saner and more responsive.