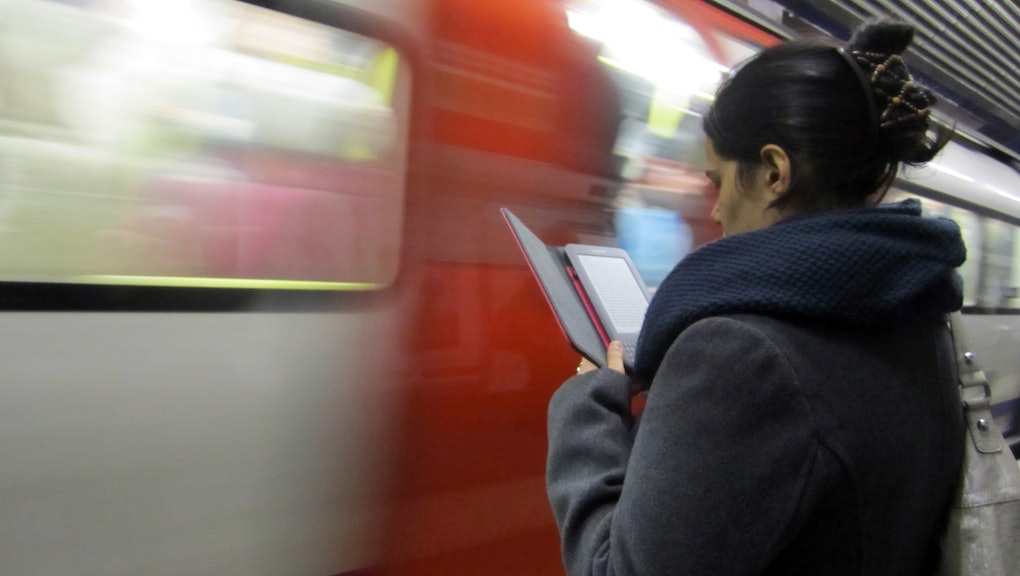 An attractive stranger sits across from you on the train, hunched over and reading. As they read on, a small smirk crosses their face. What's so funny? Maybe you and this sexy stranger share a discerning literary taste, you think. Your eyes flash down to the book to see the title.

Shit. It's a Kindle.

And the chance to connect disappears.

What we lose when covers go plastic: Since the Kindle's 2007 debut, the number of gray and white screens in the hands of train riders and beach-goers has steadily risen. As of 2014, up to 50% of Americans over 18 owned a tablet or e-reader, according to a survey by Pew Research Center.

"Books on the subway are increasingly like birds in the jungle: colorful, hard-to-spot and of obsessive interest," writer Ben Dolnick observed on the Awl while watching people read on the New York City subway for a week.

As more and more people opt for e-readers rather than paperbacks, the chances for people to connect over them dwindle. Not only are book readers sexy (just take the viral Instagram account Hot Dudes Reading), we also draw all sorts of flattering conclusions about people's book choices and use those choices to connect. Books are a natural pick-up line, an easy entryway to understanding someone's interests, passions and even biases.

"I once lent a play on the train to a man who was interested in it," Vanessa, 26, told Mic. "He'd always wanted to read another Cormac McCarthy. He asked me about it, I tucked my number in the jacket and passed it over."

One Tumblr user, k-auhale, blogged about the time she was once asked out via a John Green book. "Wait! there's this quote I wanted to show you on page... 123, I think," her crush told her. He then pointed to a sentence in Looking for Alaska that he had highlighted that read, "Do you want to be my girlfriend?" The devoted Green fan happily accepted the offer.

Finding love over books: Nobody is more concerned over the potential loss of book-inspired connections than Tricia Callahan, the founder of CoverSpy, who curates a blog that documents what the people of Boston, New York, Los Angeles, Toronto and other cities are reading in public — on the train, in the bar and in parks. Callahan felt the coming of the digital reader revolution in 2009 and wanted to do something about it.

"We felt it on our commutes: Kindle backs were the new book covers to stare at. Something was changing in our visual landscape, we were losing something," Callahan told Mic. For her, creating CoverSpy was about acknowledging the kind of connection that might be lost with e-readers.

"One day I was standing on the subway reading," said Callahan, recalling a time she was wrapped up reading about F. Scott Fitzgerald and The Great Gatsby. She looked up, and lo and behold, the woman holding the pole next to her was reading Gatsby at that very moment.

That connection prompted her to found a literary speed-dating event called I Like Your Glasses. Guests bring along their favorite or current reading material and let the books, which have run the gamut from Harry Potter to works by Paulo Coelho, break the ice.

"It may sound cheesy, but you really can see people's eyes light up when the person across from them is familiar with the book and can talk about it," Bailey Thomas, who helps run the literary speed-dating events, told Mic. "Even for just a few minutes."

The magic of reading together: As John Waters famously quipped, "If you go home with somebody and they don't have books, don't fuck 'em."

Books are a tunnel into understanding, from reaching out to a stranger on a train to someone you're starting to date. Getting to that novel stage of swapping Didion and Faulkner with someone you connect with? It all starts with a conversation, and it likely won't start with an e-reader.

"A lot of people are finding something to say to each other," Callahan said to Mic of the I Like Your Glasses events. "And any good date I've been on was when we didn't run out of things to say."