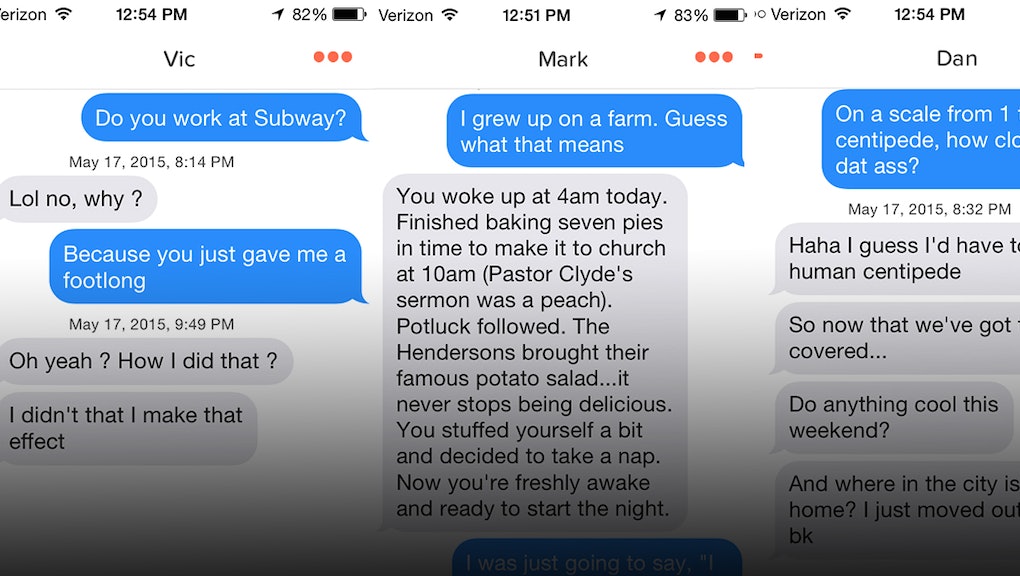 If love is a battlefield, then Tinder is its Thermopylae — an endless onslaught that pits a beleaguered minority against an ocean of indefatigable and incorrigible opponents. Typical conversation starters are cringeworthy, the pickings slim, the downsides numerous.

But I'm a naturally curious pseudo-masochist who will do next to anything for a good story, so I decided to ride into this battle with guns blazing. I would swipe right with abandon and throw the terrible, corny and inappropriate pickup lines — taken from the real-life experiences of my friends, women on the Internet and myself — at the men who matched back.

Women aren't always saints when it comes to Tinder, but more often than not, we're on the receiving end of the garbage that comes out of it. I wanted to see what would happen when I hammered my potential paramours with offensive and unsexy lines, including references to The Human Centipede and distinctly unsubtle allusions to pubic hair.

Though my friends shook their heads, I forged on. Tinder is a game, after all — you get a match and "keep playing" — and I wanted to win. I was determined to see what the view was like from the top.

The results: My matches — 38 in total, 29 of whom answered my disastrous pickup lines — were almost universally unfazed. In fact, no matter what I threw at them and no matter how uncomfortable I tried to make them, most responded positively to my lines and found them inexplicably "cute."

I tried Hans, a redheaded 44-year-old. "Do the carpets match the drapes?" I demanded. "Yep. Can't get this shade out of a bottle," he answered matter-of-factly, a response I found puzzling; as a redhead, this line frequently makes me boil over with rage. He then asked me about my follicular history.

"I'd like to name a multiple orgasm after you," I told Ben. He said he would be honored.

"Do you like heavy metal? Because I can teach you how to scream," I said to Alex. "I wouldn't hate that. Go ahead and try," he replied, followed by, "And good line."

"Is your Daddy a baker? Because DAMN you have a nice set of buns," I suggested to Mike. "Grrrrrrl! u haven't even SEEN ma buns," he winked back. I kept going. "Tell me about it," I said. "Hehe," he answered. "No, seriously," I said. "Tell me about them." After he made several unsuccessful jokes about grains, I decided I had reached my creative ceiling. The next morning, I woke up to four new messages from Mike, including a goodnight sign-off reading, "Putting my buns in the oven for the night [kissy face]."

The more atrocious my lines, the better they worked. It was like my matches were delighted I was chill enough to get on their level of sleazy humor.

I tried the same lines on different men at different times of day, but the results were largely the same. Everyone thought I was some sort of adorably witty Tinderella who was about as creepy as a kitten. Of course, there were some lines that went universally unanswered — I would recommend against using "Hey baby, I just shit my pants, can I get in yours?" on somebody you actually want to impress — but mostly, people responded to me like I had hit on them with a "Hey, what's up?"

I asked my female friends if they react nonchalantly to filth on dating apps; the answer was usually no. Many are convinced that Tinder is nothing more than a half-rotten cornucopia full of revolting guys and bad pickup lines, so they don't give jerks the time of day. When someone asks them, "Nice legs, what time do they open?" they don't respond with a bunch of smiley faces and a declaration of "That one never disappoints!!!" as Jack said to me when I messaged him. More often than not, women grimace and hit the unmatch button.

In an attempt to gain some perspective on the disparity, I threw the kitchen sink at Timothy, one of my matches. I talked about Nutella and bestiality, insinuated he had childhood-themed sex fantasies and joked about being a sex offender. Nothing seemed to scare him off.

Finally, I gave up and asked him why he hadn't deleted me, telling him that if our roles had been reversed I probably would have run off screaming.

"When a girl does it, it's hilarious," he said, noting that I would have had to have been "seriously into bestiality" for him to think twice. He added that he'd never met a girl who had been able to step over his boundaries. "I would be surprised if you could say anything that phased [sic] me," he said.

Rather than try to weird him out with things I couldn't imagine saying in front of my mother, I told him the truth. "I'm actually a writer," I said. "This whole using terrible pickup lines is part of an experiment for a story."

"Wow," he responded after a few minutes. "OK, now that successfully creeped me out."

Tinder is impersonal. I used these lines from behind the comfort of a screen, but couldn't imagine saying them in front of someone at a bar or in a coffee shop. Online, it can sometimes feel like you're talking to an avatar — an empty shell that doesn't actually belong to a real person. Like online trolling, it permits a degree of chutzpah most of us don't have in real life.

It also helped explain why, when I did get a response, I often had no idea what to say next. It threw me off when what felt like a fake, scripted conversation — after all, these guys are trawling the Web for pickup advice — took a very human turn.

As I reflected on my duplicitous experiment, I realized that part of the incentive to use lines like this, after we eliminate the men who do it for the sole purpose of being terrible, is to be heard. It's tough to raise your voice above the clamor that is Tinder; bad pickup lines provide a platform to do so.

For me, the experience was gratifying. On some primal level, it was a delight to get the chance to launch at men the word grenades that have often been launched at me.

It didn't matter that they could have cared less about my indecency, or that they probably assumed I was the kind of low-maintenance "cool girl" who could hang with the guys, who could be "chill," who wasn't looking for anything serious. I had hit on them for my own devious reasons, and I had little interest in pursuing them beyond that.

That didn't mean they gave up, however. Even now, days after I sent the initial messages and days after I stopped answering, a few are still lavishing attention on me. Especially the one who gave me his phone number after I asked him to "fukk."

As it turns out, it's a nice view from the top.