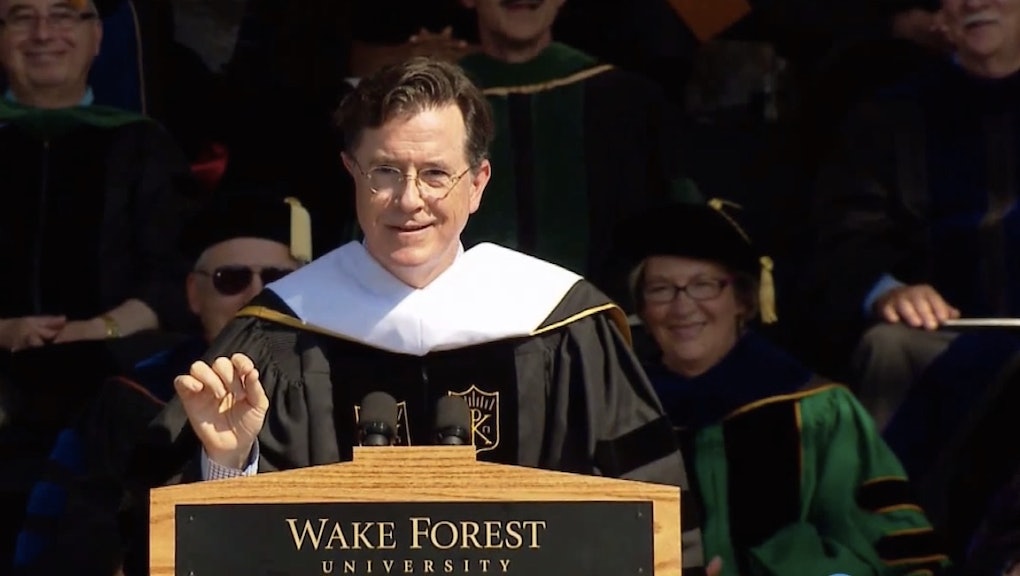 In a commencement address to the graduates of North Carolina's Wake Forest University on Monday, Stephen Colbert spoke to his audience about change and fear.

Change can be a terrifying thing for college graduates. Colbert can relate: He's about to go from playing a character on the half-hour Colbert Report four nights a week to being himself on the hour-long Late Show with Stephen Colbert five nights a week later this year.

But like many graduates, he's facing that challenge head-on, worried not about his fears but about doing the best job he can.

"I just spent many years learning how to do one thing really well. I got so comfortable with that place, that role, those responsibilities, that it came to define how I saw myself," he said. "But now, that part of my life is over."

Colbert's speech focused on the strangeness of stepping away from a world that evaluates you on a scale to one where you make up your own idea of good and bad, right and wrong.

"What is nice about having your own set of standards is, from now on, you fill out your own report card. So do yourself a favor: Be an easy grader. Score yourself on a curve. Give yourself extra credit. You have the power. You are your own professor now. I hope you find the courage to decide for yourself what is right and what is wrong, and then please, expect as much of the world around you. Try to make the world good according to your standards."

Of course, it wasn't all serious-minded advice from the comedian, who still got in some fun digs at his audience. "It's a little embarrassing you all showed up in the same outfit. Really," he said.

"Grandparents, just know that this was an issue that divided a generation," he told the elder members of the audience. "You had the Vietnam war. Your grandchildren had an ambiguously colored Tumblr post."

He also made sure to give parents credit for their own contributions to their children's education — mostly one kind of contribution.

If there's one thing graduates should take away from his speech, however, it's not jokes about #TheDress or barbs about financial sacrifice. Colbert's most potent bit of advice was a simple one: "Try to make the world good according to your standards."

Watch a clip of Colbert's speech below.