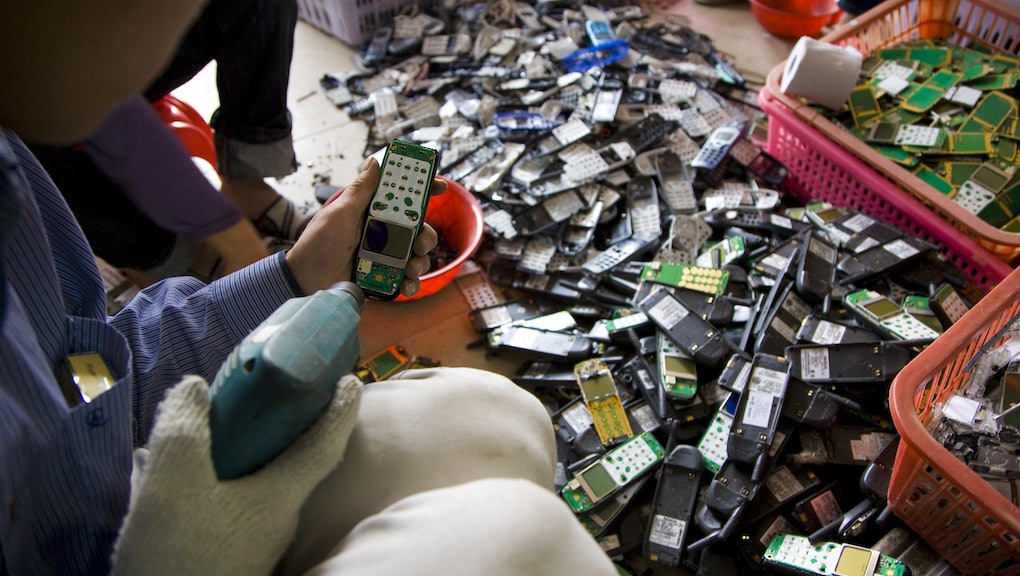 By next year, 2 billion people worldwide will have smartphones. And when those phones die, the screen cracks or the model turns obsolete, those phones will contribute to the piles of discarded e-waste already growing around the world.

Any way you cut it, your phone is having an adverse effect on the planet — from its construction to its distribution to its disposal. These 14 photos prove it.

How your phone is made: In Ghana, workers burn plastic to harvest wire for USB chargers and smartphones.

At a burn site in Agbogbloshie, Ghana, wire is torched to get the copper out of its casing.

Workers in Congo mine gold for circuit boards in smartphones and laptops.

This is Utah's Bingham Canyon Mine, the deepest open-pit mine in the world. Here, miners look for more copper for smartphone USB cables and laptops.

The Berkeley Pit is a copper mine that turned into an acid lake.

The Berkeley Pit was a 1.5-mile-wide copper mine outside Butte, Montana, where copper, gold, silver and other precious metals were harvested. It was so big it eventually filled up with rainwater. Combined with the metals and chemicals used while mining, the pit became a giant, toxic lake. Hundreds of animals have died in it.

This gigantic gold and copper mine in Indonesia provides metals for phone manufacturers. Gold is used in circuit boards and as a conductor in smartphones.

A government report accused Newmont Mining Corp. of dumping dangerous chemical substances from its mining operations in Indonesia's Buyat Bay. Here's what happened to a woman who lived nearby.

Warning: The photo below is graphic.

In 2007, Nabiha Shahab Jania Ompu, a woman who lived in the Indonesian village of Buyat, revealed the tumor she had developed since Newmont began mining gold nearby (the mine in question closed in 2004). Newmont reportedly dumped mercury and arsenic into the bay. The company claims no wrongdoing.

After the Nuomitan power station in southwest China was found to have dumped toxic metal waste into the Longjiang river, the water needed to be diluted to prevent high levels of cadmium from flowing through it. Cadmium, which is found in rechargeable batteries, can cause death and in lesser cases kidney damage when ingested.

Many phones are produced in factories in China. Some workers are said to pull up to 72-hour weeks and sleep on plywood beds.

Reports by the Institute for Global Labour and Human Rights show how the people who make our phones incur surprising physical cost, including numbness, exhaustion and harassment at the hands of security. Some allegedly spend their lunch breaks napping instead of eating.

According to the Huffington Post, an Apple spokesman claimed they had conducted audits in these factories and were aware of these issues. And while other measures have been taken, like trying to create "conflict-free" smartphones, regulating factories overseas isn't a quick — or easy — fix.

We line up for days for new phones ...

At concerts, at restaurants and everywhere in between: People can't put down their damn phones. They can even cause bodily harm — to themselves and others. Which might be why so many smartphones break or wear out after a year or two. And when that happens, they have to go somewhere.

How much electronic waste is out there? In 2012, it reached 48.9 million tons. And that number is only rising.

E-waste is estimated to reach 60 million tons by 2017. This includes smartphones, laptops, tablets, televisions, monitors, fridges and microwaves. Electronic Recyclers International, based in California, is one of many companies that opened with the sole purpose of pulling the reusable minerals from discarded electronics like these. CEO John Shegerian calls it "urban mining."

E-waste in India generates trash that fills some streets.

At E-Parisara, an electronic-waste recycling factory in Dobbspet, India, electronic parts collect faster than they can be recycled, leaving big piles of tech trash — mostly old computers and components — in the middle of the street.

In one Chinese city, families harvest e-waste and make millions processing it.

Since the 1980s, e-waste from other countries has ended up in China, broken down in the city of Guiyu, a region of 21 villages where more than 5,500 family-run shops handle the waste. According to CNN, the city processes 1.5 million tons of e-waste a year, earning $75 million annually. Roughly 80 percent of it comes from overseas.

Finally, the tech is recycled — often by breaking it down for the materials inside.

Thanks in part to the rise of the MP3, CD players are becoming less common. The little girl above in Guiyu is disassembling disk drives from computers to get the materials held within them.

Smartphones have made the world a more connected place. They've ushered in a new era of communication. But not without a great physical cost to the world around us.