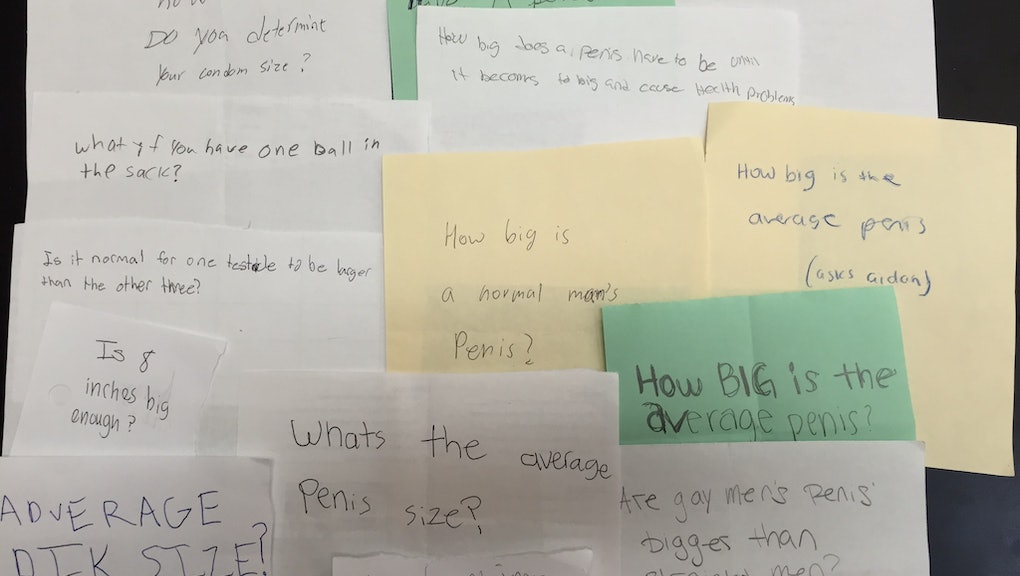 It's no secret that sex education is sorely lacking across the country, to the point where 25 states with sex ed "require that abstinence be stressed," according to the Guttmacher Institute. But the truth is that when it comes to sex, teens want to know the basic things that all of us want to know — even once we become adults.

That's abundantly and charmingly clear from a series of student questions posted to Imgur by Allison Tyler*, a sex ed teacher who's been teaching ninth grade students for over three years. The students, she noted on Reddit, were from "two different large public high schools, both very high-income, upper-middle-class areas of Virginia and California," from kids ages 14 and 15.

"I get the same questions over and over," said Tyler, who spoke to Mic anonymously to protect her students' privacy. She added, "I think the questions are funny, revealing and sometimes very sweet. Depending how you look at it, their questions actually reveal they know maybe way more than a lot of parents would be comfortable with already. That's why it's important to try to get correct information out there."

So what do teens have on the brain? The same things adults do, it turns out.

We wonder why our bodies do what they do.

We never stop trying to figure out the mystery of the orgasm.

We're curious why our bodies are the way they are.

Especially that pesky body hair — what's that about?

We're always wondering if our own habits are "normal."

We're curious to know what everyone else is doing in bed.

And we really do care about being safe.

As silly as some of the questions might seem, it's crucial to give teens the space to ask them, Tyler said, as they're already getting so much of their information from "stupid internet stuff" and Hollywood.  "I think that's the number one source of info for most of us in terms of sex and relationships, even those of us that have had our own," she told Mic. "Some are great and realistic and helpful portrayals, but most are not."

That's why the anonymous question boxes, which Tyler and her fellow biology teachers have used in their classes, are so important.

"[The questions] just crack me up," she said. "A lot of them are trying to be silly, but sometimes there's truth in the silliness and something I can give an honest answer."

After all, sex doesn't have to be so serious.