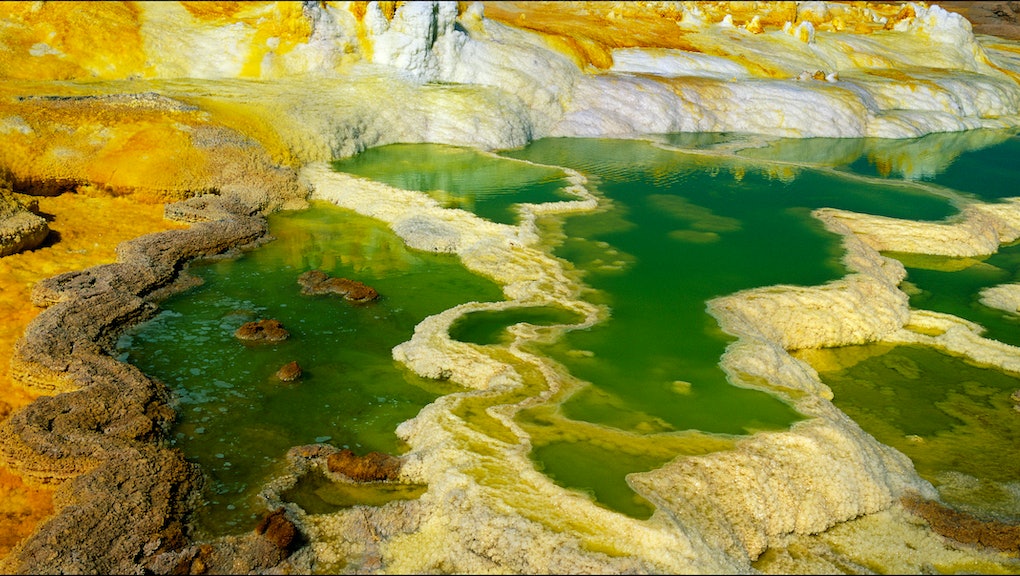 With more than 7 billion people on this planet, you'd imagine there are no spots left unspoiled and untouched by a reckless humanity.

If that's what you believe, you'd be wrong. These photos, which went viral over the weekend on the image-sharing site Imgur, reveal unconquered and largely unknown gems, which will flip your conception of Earth on its head. This breathtaking collection of images from around the globe includes Ethiopia, China, Turkey, Venezuela and more.

Fair warning: They'll make you want to quit your job, pack your bags and go exploring.

This is the lowest subaerial (i.e. above ground) volcano and hottest place on earth. The strange and unusual formations are most likely due to a rare combination of compounds and a volcano underground.

These mountains were formed 400 million years ago from quartz sandstone through shifts in the earth's crust. If this reminds you of the Na'vi flying around on pterodactyls in Avatar that's because some of the movie was actually filmed at this dramatic site.

A UNESCO World Heritage site, Pamukkale consists of hot springs on a cliff, with water that has high levels of calcite, creating "an unreal landscape, made up of mineral forests, petrified waterfalls and a series of terraced basins," according to UNESCO.

Also classified as a UNESCO World Heritage site, the Giant's Causeway's dramatic landscape is made of 40,000 blackish basalt columns that emerge out of the sea. They function as a natural protection against Atlantic Ocean storms and serve as the setting for Led Zeppelin's wild Houses of the Holy album cover.

The specific and unusual seaweed at Red Beach tolerates higher levels of alkaline, meaning in the autumn it changes color from green to red, creating a seemingly endless deep red sea.

This strange formation is made from sedimentary rock, which is roughly 2 billion years old, making it some of the oldest sedimentary rock in the world. It is part of the Guiana Highlands, which span Brazil, Venezuela, Guyana, Suriname and French Guiana.

At only 5 feet high, Fly Geyser is actually a manmade phenomenon.  A well drilled in 1916 malfunctioned when, in the 1960s, naturally hot water started escaping through a compromised part of the well wall, allowing water to spurt out of the top. Due to the unusual minerals in the water, they started to accumulate at the top, creating this majestic mound.

These majestic bubbles are frozen pockets of methane. When dead organic matter (think plants and animals) falls to the bottom of the lake, it gets munched up by bacteria, which defecate methane. Sadly, this beautiful process is both being hampered by and will augment climate change. The more surface ice melts because of global warming, the more methane is released, which, in turn, warms up the atmosphere.

These beautiful layers were formed over the course of 24 million years with a combination of red sandstone and mineral deposits, which were further altered by the same tectonic plates that created the Himalayas. Exposure to the harsh elements resulted in beautiful shapes and designs being carved into the sides of the rock formations.

This stunning cave was only discovered in 2000 by mistake, when two brothers were mining in the area for lead and silver. The impressively and unusually large crystals formed over hundreds of thousands of years, as calcium sulfate-rich groundwater in the caves, once heated by the magma that sits below it, began to cool as the heat became less intense. This turned the water's minerals into selenite, the molecules crystals are made of.

These unique-looking trees are native to the Socotra archipelago, which is just off Africa's horn on the northeastern side of the continent. They get their name from the red resin that oozes out of them when you cut into the bark.

When a small, nearby volcano erupted in 1666, the iron in the cinders and ash oxidized after landing in lava because of the lava's heat and steam, thus creating these beautiful pinkish and red splashes of color.

Glowworms, which are unique to this area of the world, are bioluminescent and produce a magical light. Thousands of them gather in this cave, creating their own constellation and lighting it up in the process.