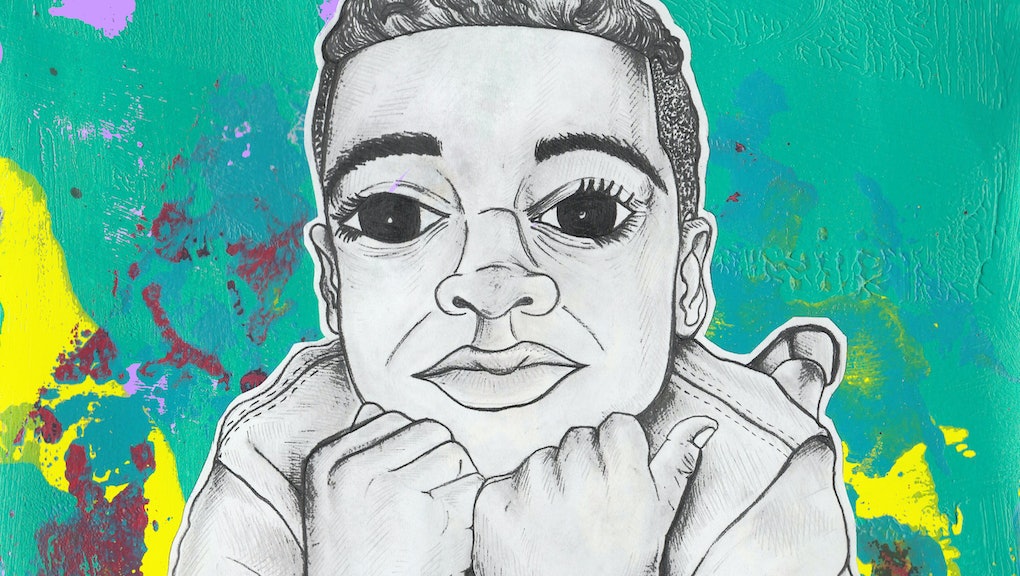 Jeremiah Nebula appeared to his creator during an impromptu solo dance session in the middle of a bedroom.

"He just came to me," Myles E. Johnson, author of the new children's book Large Fears, told Mic in an interview. "So I started asking myself questions: What does he eat? Where does he go? What's he afraid of?"

Like any good hero, Jeremiah's tale charts your typical protagonist's trajectory: He faces challenges, overcomes them and changes after enduring them.

But that's where the typicalities end. For one, Jeremiah is black. He's a little boy who loves the color pink. And like the two men who brought him to life — Johnson, 22, and 26-year-old illustrator Kendrick Daye — Jeremiah is queer, which makes confronting his fears much less of a plot device and more a stark reflection of his creators' own childhoods.

"We both knew we were unsafe from a very young age," Johnson says of Daye and himself. "That idea of [Jeremiah] being so overcome with fear so young reflects that. He doesn't have that blind courage. He has what happens when someone tells you that who you are is wrong."

With Large Fears, the duo hope to make visible this struggle faced by LGBTQ children every day — namely, how do you develop a sense of self-esteem when so much of the culture around you challenges your very existence?

"When you don't see yourself in the media, it does weird things to your psyche," Johnson said. "The worst thing it can do is make you agree with what you see — 'nothing' — and just think you're invisible. But most people who feel like that don't have terrible lives, necessarily. They just live believing they don't matter."

"You don't really recognize it until you're much older," said Daye. "So a lot of the response [to Large Fears] has been people saying, 'If I had something like this when I was a kid, things would've been different for me.'"

It's not that there are no books written for or about LGBTQ children, per se. In fact, that kids are coming out as gay, lesbian, queer, bi or trans at progressively younger ages — 13 on average and dropping, compared to sometime "in their early 20s" during the 1970s, according to BuzzFeed News — suggests that children identifying as such are more on America's cultural radar than ever before.

There's still a major problem, though, according to Daye: "Very few of [these books] deal with children of color. It's still a very new category."

Of course, marginalizing people of color's experiences is not a new phenomenon in American literature, and in some cases, LGBTQ kids' lit is not much different. But Johnson and Daye are fighting to get Large Fears in front of a larger audience while adding an interactive element to the reading experience.

"Most of the money we're asking for on Kickstarter will go toward workshops," Johnson said. These events — preliminarily held in New York, San Francisco and Atlanta — will incorporate a Large Fears book reading plus creative exercises aimed at helping children ages 5 to 12 face their fears, especially as they relate to identity."

"It's the part I'm most excited about," Daye said. "Just being able to get into people's faces and change lives."

The fusion is a formidable one: an imaginative and vibrantly illustrated space travel story — influenced by equal parts Dr. Seuss, Shel Silverstein, Salvador Dalí and bell hooks — accompanied by community-level activism directed at LGBTQ children of color. It's an approach that's noticeably missing from American children's stories today. But if all goes as planned, that won't be true for much longer.

More information on this project's fundraising campaign is here. Read more about Large Fears at the website.