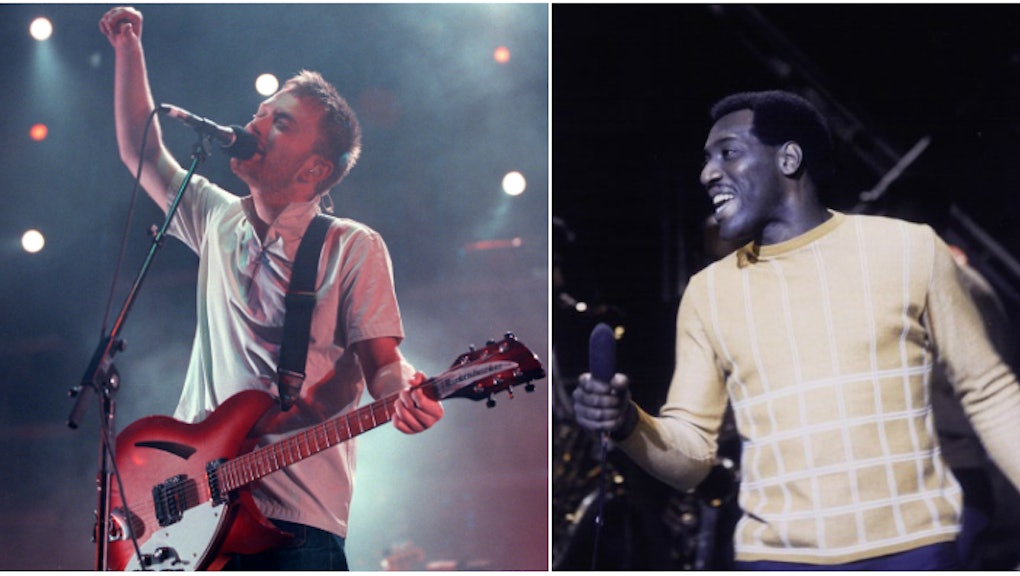 In music, the line separating accident and inspiration is fine — and that's where some of the best creativity happens. Music is an art of spontaneity, and some of the greatest moments in music history have been born out of complete happenstance. Unexpected shifts in direction can cause artists to arrive at some true musical revelations.

In today's endemically overproduced pop scene, where vocals are pieced together from scores of auto-tuned takes, these "happy accidents" are much rarer. Yet the spontaneity of musical creation is integral to its joy, and we can't afford to forget it. Here are the unexpected moments that truly changed the fates of some of music's biggest songs and acts.

The entire history of rock 'n' roll, grunge, punk and metal hinged upon an accident that took place during a country music recording session. While recording Marty Robbins' "Don't Worry," guitarist Grady Martin tried to switch from guitar to the bass during the song's bridge section. But the recording engineer couldn't reinforce the recording console fast enough and the bass blew a fuse, right around the 1:26 mark.

This wasn't the first time that a busted amp had produced a rumbling distortion on record. But this instance captured the imagination of audio engineer Glen Snoddy, who took apart the amp, figured out the problem and created music's first fuzz box. Initial sales of the device were sluggish, until the Rolling Stones used it for their 1965 hit "(I Can't Get No) Satisfaction."

Metal, which would be nothing without guitar distortion, owes more to country than it would ever like to admit.

2. Ella Fitzgerald made one of the most famous live recordings ever by forgetting the words to "Mack the Knife."

Ella Fitzgerald was an improvisational master. She's remembered for her unparalleled scatting ability, though one of the most memorable examples of her talent was a complete accident. On the version of "Mack the Knife" that appears on her 1960 album Ella in Berlin, she completely forgets the song's lyrics after the first minute.

"Oh, what's the next chorus? / To this song, now," she sings, not missing a single beat. "This is the one, now, I don't know." She fills the next three minutes with entirely improvised verses. She includes some clever scatting, doing a spot-on Louie Armstrong impression, perhaps as an apology for butchering the song he introduced to American audiences. Despite the hilarious extended mistake, audiences loved it, and the record it appeared on won two Grammys.

3. Radiohead's "Creep" would have been nothing if Jonny Greenwood hadn't tried to sabotage it.

The result is those sawtoothed guitar stabs that open the chorus, which unintentionally save the song from becoming a conventional alt-rock bore. "Creep" became Radiohead's first big hit. Though the band later tired of the song, it helped put them on the map as one of the most promising acts in experimental rock.

4. Green Day's false starts made "Time of Your Life"

Billie Joe Armstrong wrote the song around the time of their breakout album Dookie, but he felt it didn't fit with their punk material. It didn't appear on record until their fifth album, Nimrod. When he sat down to record it, he messed up the intro twice, before starting a third time and finally getting it right. On the recording, you can actually him hear say "Fuck" softly under his breath.

Instead of just beginning the song from the first proper start, they decided to release the song as-is. It helped them keep a hint of the band's edgier, DIY past as they began their crossover into the mainstream. It added a flawed beauty that complements the song's contemplative lyrics. "This is a real beautiful song. Who cares what people think? So we just went for it," Mike Dirnt, the band's bassist, once said of the song, according to Green Day Authority. "Punk is a lifestyle. We're just as much punk as we used to be. Putting this song on the record was the most 'punk' thing we could do." The opening fuck-ups make it even more so.

5. Otis Redding left "(Sittin' On) The Dock of the Bay" unfinished, and it solidified his legacy.

"Otis was one of those kind of guys who had 100 ideas. Anytime he came in to record, he always had 10 or 15 different intros or titles, or whatever," guitarist Steve Cropper told NPR's Fresh Air in 1990, according to Song Facts. "(Sittin' On) The Dock of the Bay" came out of one of these scraps. Redding came into the studio with an idea to write a song about watching ships move in and out of a harbor. Cropper, acting as Redding's co-writer, vibed on that idea and came up with some lyrics.

But when the pair recorded the song, they didn't have a third verse planned. To fill the space for the recording, Redding whistled an outro, intending to come back and replace it with a verse. Unfortunately, he passed away before he got the chance. Cropper ended up leaving the whistling in. Today it's one of Redding's best-known hits, and one of the most famous whistling songs in all of recorded music.

6. Screamin' Jay Hawkins got too drunk to sing his ballad "I Put a Spell on You."

Jay Hawkins made a mistake that altered the course of his entire artistic career one night. The bluesman allegedly tried to come into the studio to record a blues ballad "I Put a Spell on You" while blackout drunk. But in the midst of the session, he had a boozy realization, and he decided to scream the song rather than sing it in a traditional blues pattern. The song and style became his signature sound.

"Before, I was just a normal blues singer. I was just Jay Hawkins," Hawkins once said, according to Flavorwire. "It all sort of just fell in place. I found out I could do more destroying a song and screaming it to death." As Flavorwire points out, the end of the song, which devolves into orgiastic screeches, was deemed too provocative for radio and was banned. Screamin' Jay Hawkins brought sex and danger more fully into popular music — all because he got drunk.

Avant-garde composer Steve Reich's first official piece, "It's Gonna Rain" was inspired by an accident that occurred while he was playing with tape loops. He was experimenting with looped recordings of a preacher when the tapes started to veer slightly out of synch. "But when I heard it, I thought, 'This is fantastic.' It's a kind of seamless process that goes on and on. After I did that piece and another one like it, I began to apply that principle to live musicians from about 1967 to 1971, and then sort of moved on from there," he told NPR in 1999.

That recording became one of the fundamental recordings of a new compositional style that would be one day deemed minimalism. All of Reich's future innovations would influence generations of pop, rock, house, techno and hip-hop artists to come.

The disorientingly woozy effects of Mac Demarco's Salad Days give it a truly unique, lo-fi vibe. The warped wooziness of his instrumentals complement his slacker rock songwriting perfectly, though it turns out his ear-catching tone wasn't all meticulously crafted in the studio.

Demarco is a notorious chain smoker, and while recording his sophomore full-length Salad Days in his Brooklyn apartment, the smoke had an unintended effect on the recordings: It caused his tape to warp. "The guitars sound so fucked up," he told Pitchfork. "It's amazing." Cigarettes are bad, but indie rock's most exciting act wouldn't sound the same without them.