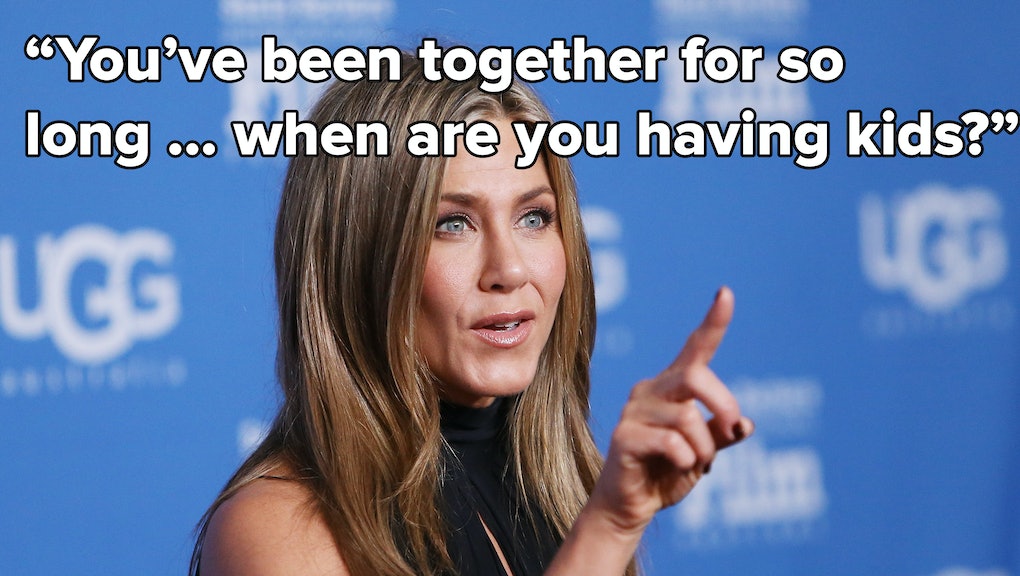 11 Questions No Woman Should Have to Answer Ever Again

It's wedding season, and it's not just affecting your Facebook NewsFeed. You'll start finding yourself among friends and family as you gather to celebrate the great, government-sanctioned union of love. And if you're a woman, that means you'll invariably face a barrage of questions about your personal life.

Single? In a relationship? Married? No matter your status, there's an aunt or a high school classmate or former coworker's cousin waiting in the wings with a highly intimate question probing the trajectory of your personal life.

Luckily, there are just three words you need to remember when faced with one of these cliched, obnoxious questions: It's nobody's business. If women want to discuss their love lives, we will gladly volunteer. In the spirit of raising the bar for dinner party, wedding reception and baby shower conversations hereafter, here are 11 questions no woman should have to ever answer to again.

It's safe to say there is someone special in everyone's life. Whether that is a boyfriend, girlfriend, fling, mother, sister, cousin, spouse, brother, father, dog, kitten or house plant is pretty much up to the woman. Asking a woman this pointed question is just plain condescending. Also, isn't the woman you're talking to special enough?

2. "You're so great/funny/attractive/[insert positive attribute here] ... why are you still single?"

This question assumes relationships are something bestowed upon the worthy — the beautiful, smart, funny women — rather than something all individuals deserve. Cute, successful, hilarious, talented and wonderful women ("such a catch!") can be single. Singleness, after all, isn't a disease.

As author Sara Eckel told the Hairpin, "I realized all of my friends who were in our mid-30s and single were trying to figure out what was wrong with us, trying to examine if we were afraid, if we picked the wrong guys, what it was and why." Turns out there was nothing wrong at all.

This annoying reasoning preys upon the belief women are so desperate for relationships that they should take up any offer they can get. If they don't, what's wrong with them?

But there are more criteria to a satisfying relationship than a partner being nice. The men and women who don't accept a woman's right to just say "no" to an offer to a drink are also implying a woman doesn't have the right to choose who she dates. She does. Regardless if they're "nice."

Having or not having a mate has little to do with how selective your dating process is. Sure, maybe you're a little skeptical of the game your Tinder matches are playing, but fulfilling relationships do require a more discerning eye to really work. It's not so much about being picky as waiting for someone we feel like understands and supports us. As Jennifer Aniston told Vogue in 2008, "There is nothing you can control about love."

5. "What do you mean you're not looking for a relationship right now?"

Yes, sometimes people are on a datecation. The absence of a relationship or the search for one doesn't mean someone is unhappy or even unwilling to fall in love, just that other components of life are taking top priority.

Nobody knows this better than Taylor Swift. "I used to think it was important to find a boyfriend," Swift said in a February interview with the Telegraph. "But I don't feel that it is now. I just want to have as much fun and as many adventures as possible." Being flabbergasted at the idea of a content single woman undermines those other important relationships. (Or, if you're T-Swift, those platinum albums.)

6. "How are you going to balance having a career and a family?"

It's often our families who give us the support to pursue our dream careers. "I truly believe that the single most important career decision that a woman makes is whether she will have a life partner and who that partner is," Sheryl Sandberg wrote in her 2013 book, Lean In. "I don't know of a single woman in a leadership position whose life partner is not fully — and I mean fully — supportive of her career. No exceptions."

7. "He's not bothered that you make more money than he does?"

It's an inescapable reality: Partners are going to earn different amounts of money. While a wage gap certainly exists between men and women — men earn roughly 20% to 25% more than women in comparable positions — as of 2013, about 4 in 10 American households with children under age 18 included a mother who was the primary breadwinner. Asking if a man is bothered by his partner's earning abilities is not only gravely sexist — it's a sign the asker should recalibrate their time machine.

8. "Why aren't you guys living together?"

Yes, the share of cohabiting couples has been steadily increasing — according to Pew Research data, about 24% of never-married Americans ages 25 to 34 are currently shacked up with a partner.

But that's not everyone's relationship goal. In fact, moving in together before you're ready to or for the wrong reasons, such as lowered rent or convenience, can damage a relationship. "If [living together is] based on desire, then you're usually going down the right track," Michael Broder, author of Can Your Relationship Be Saved? How to Know Whether to Stay or Go, previously told Mic. If, on the other hand, it's based in fear, "then you're probably going down the wrong track," Broder said.

Either way, where you sleep at night and who's in that bed is your business.

9. "When are you getting engaged?"

Meeting, courtship, marriage, children — it's the pervasive playbook, or the "Relationship Escalator," as sex educator Timaree Schmit wrote for Philly.com: "The relationship escalator says romance happens at a certain pace, with specific mile markers that indicate you're on the right route."

But all dating doesn't always happen in the same direction, and these types of questions about marriage leave those who are disinterested in marrying, focused on other life goals, questioning marriage or polyamorous out of the equation. Even if you are in a marriage-bound couple, as Mic reported, factors such as money, high divorce rates and political beliefs may give you pause. Marriage as the "ultimate" step can't be the assumption for all relationships.

10. "Why don't you have kids yet? You two have been together for so long!"

It may the single question that haunts "older" women — aka anyone above the age of 30 — the most. Just ask women like Jennifer Aniston, Jennifer Westfeldt and Oprah Winfrey, who've been subject to more questions about their uteruses than a gynecologist. But in fact, a growing number of women are choosing to go the childless route. Today, nearly half of women between ages 15 and 44 are childless, and a large share of women are delaying having children. Asking a coupled-off woman if she's having kids is making the assumption that it's everyone's prerogative, when it's simply not.

As Marisa Tomei put it in an interview with Manhattan magazine in 2009, "I don't know why women need to have children to be seen as complete human beings."

Can't answer any of the above questions? We imagine you'll at least be subject to this one over the next several months. And it is absolutely nobody's business. Having a plus-one to a big event is not a requirement for attending one. If you're flying solo to a wedding, more power to you. And more drinks for you.