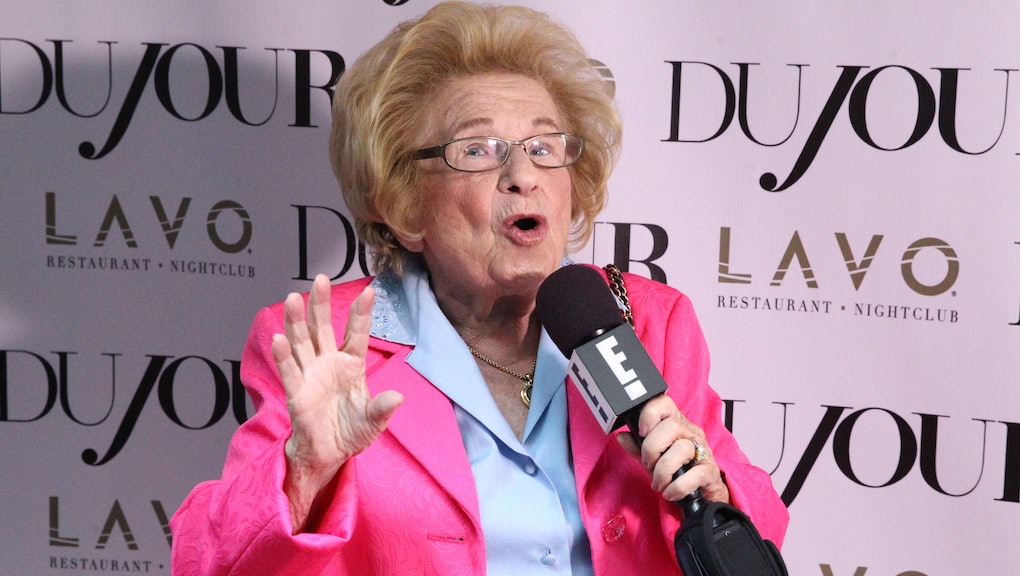 The Story of How Dr. Ruth Became Famous Will Make You Love Her Even More

Before Dan Savage, before Sex and the City, before Kim Kardashian, before Fifty Shades of Grey, there was Dr. Ruth.

At 86, Ruth Westheimer is among the most famous living sex therapists. She's been dishing out candid, good-humored sex advice for 35 years. With her upbeat, grandma-next-door meets no-bullshit candor, Westheimer has made a career of talking about sex for what it is: a natural, shame-free part of the human experience.

The phrase "sex-positive" gets thrown around a lot today, but if we want to understand what an honest, shame-free approach to sex really looks like, we should look to Westheimer. The story of how Dr. Ruth became famous demonstrates just what a positive force sex can be.

Heartbreaking beginnings: Born Karola Ruth Siegel in Germany in 1928, Dr. Ruth was the only child of Orthodox Jewish couple Irma and Julius Siegel.

As a child, she was curious and literary, and she recalls climbing up in her father's study to investigate his books — including ones about sex. But tragedy struck early. By 1939, at only 11 years old, she was forced to flee Germany, emigrating to Switzerland as part of the Kindertransport after her father was captured by the Nazis.

There she was sheltered, along with about 100 other children, by Swiss activist Franzisca Goldschmidt, remaining for six years. She wrote letters to her parents regularly, but around 1941, the letters stopped. Westheimer later learned that her parents had been killed in the Holocaust, probably at Auschwitz.

"Because I was not killed by the Nazis — because I survived — I had an obligation to make a dent in the world. What I didn't know was that that dent would end up being me talking about sex from morning to night," she told the Guardian.

A real-life sniper: After the war was over, she moved to what was then Palestine and joined the army at just age 17. She trained as a sniper, and a good one at that, as she told Esquire in 2010:

"Yes, I was trained as a sniper in the Israeli armed forces. This was after the Holocaust. I was a very good shooter. I once went with my grandson to a county fair where you shoot a water pistol at the clown's mouth. We came home with twelve stuffed animals and a goldfish."

She was wounded during Israel's Independence War in 1948, after a bomb exploded in the barracks, and had difficulty walking afterwards. She also met the Israeli man who would become her first husband. They moved to Paris to both study at the Sorbonne, where she pursued a psychology degree while also teaching kindergarten.

By 1956, Westheimer and her first husband had divorced, and she and a new boyfriend, who would become her second husband, emigrated to New York City. There, she enrolled in the New School for a master's degree in sociology. They had a daughter but divorced shortly after, and Westheimer reportedly worked as a maid while attending night classes. She was a single mother, learning English in a new country, pursuing a master's and working to support herself.

She completed the master's in 1959 and moved on to a doctorate of education in the Interdisciplinary Study of the Family at Columbia University's Teacher's College. "So you can see that my fascination with the importance of family was at the root of everything for me," she told the Guardian. Around the same time, she met Manfred Westheimer, who would become her third husband. They had a son, Joel, and Westheimer became an American citizen.

She also decided to take a job at Planned Parenthood.

Her Planned Parenthood launchpad: "I thought I would do my doctoral dissertation on the orphans of the Holocaust," Westheimer recalled in an interview with Makers. But another inspiration struck:

"But when it came my turn to say what I'm going to do for my doctoral dissertation, I threw out the idea, because I looked at this very handsome instructor, and I said, 'He's not going to be interested in that as much. I'm going to take the talk about sex, and since I work for Planned Parenthood, he will be very interested in my topic.' And I was right!"

She had gotten involved with Planned Parenthood in Harlem while studying at Columbia, which not only steered her dissertation ("I used the data of following 2,000 women with their contraceptive and abortive history," she told NPR) but also inspired her to study sexuality with Helen Singer Kaplan, the revolutionary sex therapist at New York Hospital-Cornell University Medical Center. She ended up working at the hospital, practicing and teaching sex therapy after receiving her doctorate.

Westheimer was 52 years old and still working at Cornell in 1980 when a letter arrived. Local New York radio station WYNY-FM was revamping its image and had the idea to develop a specialty show based on sexual education, so they reached out to the hospital's sex therapists. As she recalled to Makers, "Nobody wanted to go, because there was no money attached to the letter. I saw that letter and said, 'I'll go. You ought to have a program on the air.'"

Sex ed on the airwaves: She had never done radio before, but after answering questions mailed in by listeners on air, Westheimer was an immediate hit. She was given a 15-minute segment, eventually called Sexually Speaking.

After just two months, the show was expanded to a full hour and she started taking questions live on-air. 1982 saw the addition of a TV segment on Lifetime, also called Sexually Speaking, in which she answered people's phone-in questions about sex without judgment or snark — and never glossed over the important details, however graphic.

"I had no problems, I had no demonstrations, because I was not a young woman ... I was already 50, I have an accent, so people could say, 'No American would talk like that about ejaculation and orgasm!'" she told Makers. "I could use the [phone] call as a teachable moment, and always with humor."

For the next thirty years through today as the iconic Dr. Ruth, Westheimer has taken that same approach: honest, forthright and delightfully sex-positive.

Still teaching — and tweeting: These days, Dr. Ruth remains a popular cultural icon and shows no signs of stopping. She's been an adjunct professor at American universities, still travels all over the world to promote her books (she's written more than 30) and continues her speaking engagements. There is even a play about her life, called Becoming Dr. Ruth, and her newest book, The Doctor is In: Dr. Ruth on Love, Life and Joie de Vivre, is set to be released in June, just in time for her 87th birthday.

"There is nothing more important [to a healthy life than sex]," she's said, which means healthy sexual relationships and pleasure for everyone involved. And like a healthy lifestyle, there's nothing wrong with pursuing that — no matter how old you get.