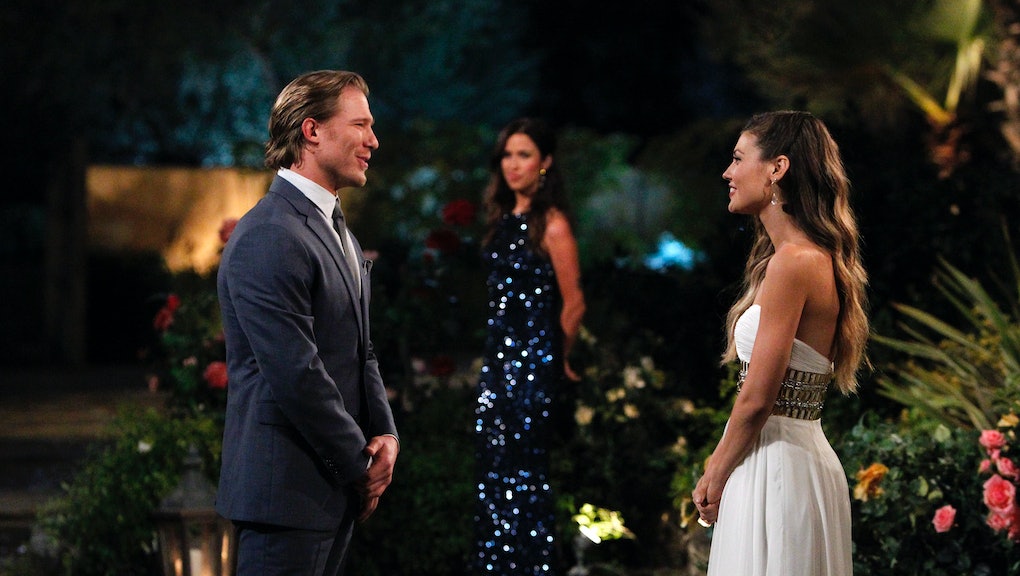 For people who decry the fake, contrived nature of the Bachelor/Bachelorette franchise, Monday night's game-changing Bachelorette premiere should have been a breath of harsh albeit fresh air.

Instead of having 25 suitors line up to date one person (you know, as we so often do in the real world), the producers presented 25 men with two potential bachelorettes, Kaitlyn and Britt. Allowing the women to size up their suitors while the men sized them up right back — a two-way process — should have theoretically made the exercise feel more like real-life dating.

And it did — too real. By shifting the traditional power away from the bachelorettes, the show invited in the most miserable elements of real-world dating, in which insecurity and gendered power dynamics reign.

A half-hearted attempt at empowerment: The very concept of the Bachelor/Bachelorette series isn't progressive by nature, with its emphasis on "traditional" engagements, marriage and baby-making. But the arrival of the female-centric Bachelorette in 2003, after two seasons of The Bachelor, seemed to be a stab at gender parity: A woman was at the center, selecting the dates, choosing her guys and helming those infamous rose ceremonies.

When ABC announced that season 11 (!) of The Bachelorette would see the 25 male contestants voting for one bachelorette over another on night one, the backlash was swift. Former Bachelor Sean Lowe called it "downright degrading" to have the men call the shots, and fans sounded off on the "new levels of sexism and ickiness."

Turns out, the change-up was both a dose of real life and a dose of sexism and ickiness. Because — surprise, surprise — being a woman in the dating world can involve dealing with a decent heap of sexist ick.

Men calling the dating shots: The start of the evening with Britt and Kaitlyn simultaneously receiving the men, though unconventional for TV, was all too real for many women watching. As the men initially flocked toward Britt, the "pretty one" of the two (drop-dead gorgeous) women, Kaitlyn grew noticeably insecure and down on herself, questioning her confidence and charm. In that moment, she was every girl at the party who gets overlooked by the shinier, sparklier woman.

Then, unsurprisingly, the tables started to turn once Britt saw Kaitlyn bonding with several men in her laid-back, easygoing way, somehow losing grip on all the confidence she had just had.

In short, they were so many women dating, attempting to gauge men's preferences and internally fighting back against their insecurities.

Of course, men have insecurities when they date too. But as the episode progressed, various other insidious sexist dating habits made cameos, from the men physically sizing the women up to their control over the initial phase of the dating process. Ryan, the token drunkard of the bunch, went so far as to take a swipe at Kaitlyn's butt, which led to a well-intentioned and yet weirdly patronizing swoop of men in to save her, in a match of "who can out-gentleman who."

After made to feel insecure and judged by the men, Britt and Kaitlyn were subjected to voting, kicking The Bachelorette off with the men getting the upper hand yet again. For a show that's supposed to empower the women, the process felt decidedly retrograde.

For those people whose biggest gripe is the unrealistic setup of The Bachelorette, well, Monday night's premiere injected a dose of reality. Yes, the men got a say instead of just the women. But the men called the first shots of the dating process, as they so often (still) do, and in the process made the "less pretty" girl feel insecure about her beauty, while the "less cool" girl felt insecure about her personality.

Thankfully, the second episode should put the woman back in the driver's seat for the rest of the season. That is, until the finale, in which she chooses her final guy ... then he's the one to get down on one knee and propose. God forbid we upend too many gender norms at once.