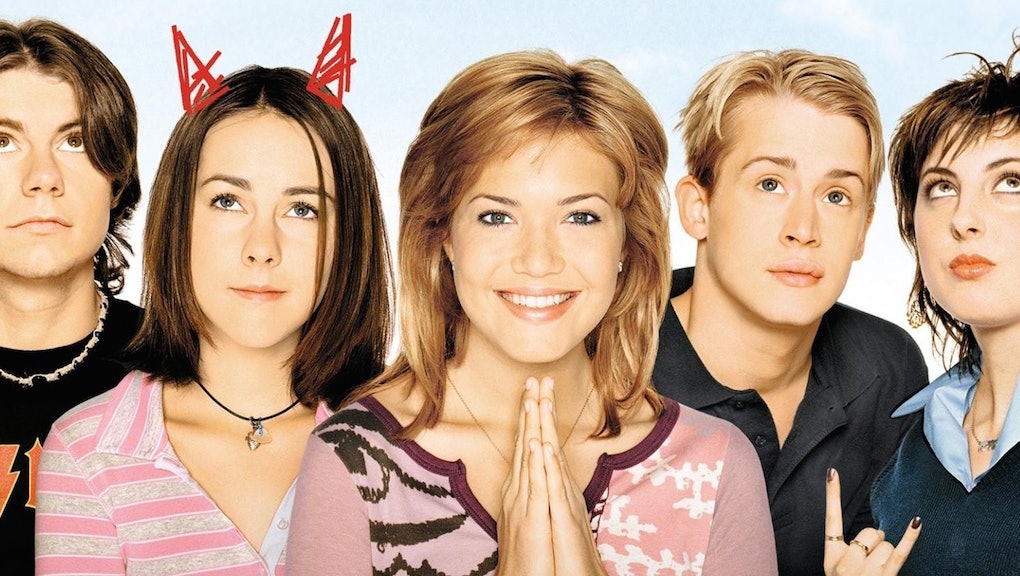 With a sequel in theaters that's making major money, Pitch Perfect is changing the Hollywood game for female-driven pictures at the box office. But if you're looking for more stories about women, you don't have to wait for studios to produce more. There's a whole world of female-fronted films waiting for you on Netflix.

In honor of Pitch Perfect and Pitch Perfect 2, here are nine movies about and starring women that'll make you laugh so hard, you'll forget comedies about men even existed.

The exclamation point in Saved!'s title is incredibly appropriate for this exuberantly weird satire. It's a teen movie, yes, but it stars Hunger Games actress Jena Malone as a Christian girl who gets pregnant after trying to save her boyfriend from becoming gay. It is a lacerating look at religion's most extreme aspects, but it's also incredibly quotable and hilarious. Best in show is Mandy Moore, playing an over-the-top agent of God's mission who comes for Malone's Mary and loses herself in the process.

This beloved Noah Baumbach film stars Greta Gerwig, a momentary critical darling who co-wrote the film with her director and lover. It's easy to see why you'd fall in love with Gerwig: Her performance as Brooklynite dancer Frances Halladay is radiant. She quite literally dances across the screen, bringing color in her work that's absent from the black-and-white film. The film is worth seeing, if for no other reason for Gerwig.

Juno Temple isn't half the star she deserves to be, as is plainly evident in 2010's Dirty Girl. She plays Danielle, a girl on the run with her gay friend, in a coming-of-age story remixed as a road movie. The movie's a bit rough around the edges, but Temple's star power radiates from her every move and line delivery. It's a far better movie than its reputation suggests, but that's strangely appropriate — Danielle wouldn't care what the critics have to say anyway.

Before she was best known for Goop, Gwyneth Paltrow was a winning comic actress. In this 2003 comedy, she plays small-town Nevada girl Donna, who wants to be a flight attendant. This campy movie suffered in its release after being delayed post-9/11, when a movie about flying would have been unpalatable for audiences. Paltrow herself isn't a fan of the movie, but as a kitschy delight, it's totally worth a watch with a cocktail in hand.

If you remember this as the light, fluffy Jennifer Garner romantic comedy, you're absolutely right. But you also aren't giving it enough credit for being very, very good at being that light, fluffy rom-com. Garner is positively delightful as Jenna Rink, a woman who grows up 17 years overnight, playing the strangeness of the experience with such plucky charm. Unlike Tom Hanks in Big, another great performance marked first by confusion, Garner plays Jenna as getting exactly what she always wanted, then slowly realizing why you can't cheat the process of growing up. Plus, the "Thriller" dance sequence is amazing.

You haven't seen Heathers? "What's your damage?" If you love Mean Girls, you already love Heathers and don't yet realize it. It's the original girl-clique high school movie, except demented and angry. It's a truly wild ride, featuring some of the most quotable dialogue ("Lick it up, baby! Lick it up.") this side of Clueless. Winona Ryder is iconic as Veronica Sawyer, a girl who finds herself deep in a world she never wanted to be a part of.

Why can't women do the trailer voice-over work men can? That's the question triple-threat Lake Bell posed in her 2013 movie In a World... The film, which Bell directed, wrote and starred in, features her as the vocal coach daughter of a voice-over legend. It's a complicated film, focusing on the tough relationship between father and child and what sexism in an industry can do to that bond. It's also hilarious, with a deep-bench supporting cast you'll love.

YouTube and E! star Grace Helbig recruited friends and collaborators to make this slice of fun that appeals directly to the vlog-loving demographic. Helbig plays Elise Miller, a woman whose life falls apart and who finds herself back at her old camp as a counselor. It's not the deepest film, but it's got good laughs and charismatic personalities.

A forgotten pleasure from the mid-Aughts, Miss Pettigrew is a period romantic comedy anchored by two strong women. They are the titular Miss Pettigrew, an English governess played by Frances McDormand, and fabulous actress Delysia, as portrayed by Amy Adams. It's a throwback to the classic screwball comedy from the mid-1930s, and the relationship between its women is the core. It's a true delight.