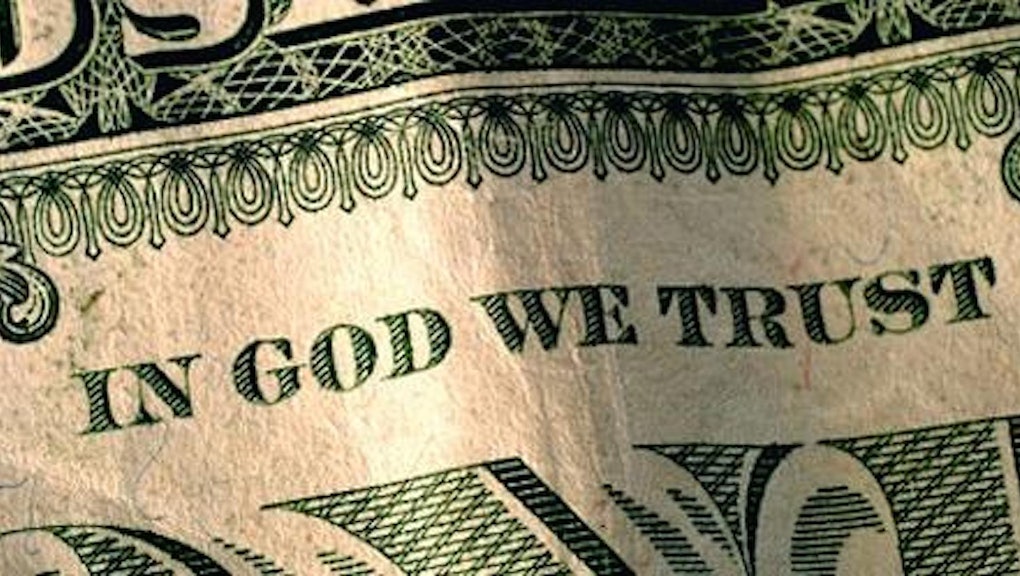 There's One Word on U.S. Dollar Bill That We Need to Get Rid of Right Now

While America deliberates putting a woman on its $20 bill, another community is pushing for visibility on currency: atheists.

Michael Newdow, an attorney and full-time ER physician who championed a failed 2004 petition to get the phrase "under God" removed from the Pledge of Allegiance is leading the charge. Now he plans to file a new challenge to the constitutionality of using "In God We Trust" on American currency in seven federal circuit courts, according to ThinkProgress.

Newdow wrote Friday at The Friendly Atheist blog that  the words In God We Trust "violates the first 10 words of the Bill of Rights ('Congress shall make no law respecting an establishment of religion') and it violates the Religious Freedom Restoration Act."

That's right, he's using the RFRA — the same act the U.S. Supreme Court cited in the 2014 Hobby Lobby "religious freedom" ruling that companies have the right to refuse health insurance coverage for contraception to employees based on the employer's religious beliefs — to support his case.

Losing (and finding, and losing) our religion: The Founding Fathers did not establish "In God We Trust" as a national motto. The motto was was first used on coins during the Civil War, but did not appear on paper money until 1957, after Congress passed a law establishing it as the national motto of the United States.

Even though, Newdow wrote, the motto may violate the Constitution's establishment clause, several courts have dismissed this argument so far.

According to Pew's latest survey, the 56 million religiously unaffiliated adults in the U.S., known as religious "nones," constitute a larger population than Catholics or mainline Protestants. That makes 22.8% of Americans, meaning the motto on the dollar is out of touch with a huge chunk of the population.

How the Religious Freedom Restoration Act could ironically get God off your money: Newdow wrote that he plans to use the RFRA to make his case. He explained, "every Supreme Court justice involved in the three RFRA cases heard to date has agreed that, under RFRA," the government cannot impose upon religious activity unless it has a truly compelling interest, and that laws must be "narrowly tailored to serve that interest."

This means, as ThinkProgress observed, that Newdow could either use the RFRA to claim that atheism is a type of religion "deserving exemption" — just like those pizza wingnuts in Indiana — or claim that people affiliated with other religions are "being spurned" by the motto.

"Imagine if Christians had to carry on their body something they disagree with religiously, like 'Jesus is a lie' — how long do you think that would stand?" Newdow told ThinkProgress. "But atheists are so denigrated in this society that people accept this without a second thought."

With America's changing religious landscape, especially given the significantly growing numbers of those who are not religiously identified, we could indeed see a change to our money. Ironically, while it's interesting to interpret this possible change as progress, the reality is that the change will take us back to 1956.