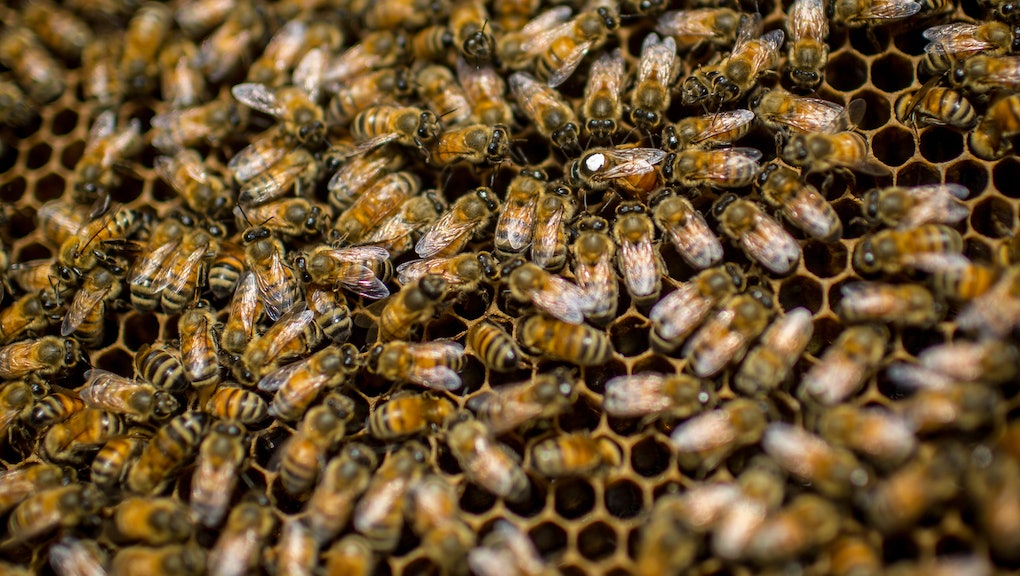 Unfortunately, that iconic image is being threatened. Over the last 12 months, 42.1% of American honey bee colonies have perished, according to an annual survey published by the U.S. Department of Agriculture. The loss of more than 4 in 10 honeybees was the second-largest annual bee die-off since 2010.

The scale of American bee death has reverberated at the highest levels of government. On Tuesday, President Barack Obama announced the results of a task force organized last year to create federal strategies to protect bees, Monarch butterflies and other insects, CNN reported. The "National Strategy to Promote the Health of Honey Bees and Other Pollinators" has an ambitious goal of reducing wintertime bee mortality (winter is typically the hardest for bees) to no more than 15% over the next 10 years. To help get there, the plan aims to "restore or enhance 7 million acres of land for pollinators over the next five years through federal actions and public/private partnerships."

Last year's die-off is only the latest chapter in America's struggle preserving bee populations. "Colony collapse disorder," which sees colonies plummet through either death or spontaneous abandonment, had previously bedeviled scientists since it was reported in large numbers during the mid-2000s. The latest bee deaths, however, are not thought to be associated with the phenomenon; in the same report, U.S. investigators said spontaneous colony collapses had been sporadic in recent years.

A complex problem: While officially distinct problems, there is wide consensus that both CCD and the general trend of bee death are caused by a host of interrelated factors that defy an easy solution.

"Years ago, when our grandparents had their family farm, they planted things that would bloom all summer long, a variety of things in a garden," he said, alluding to the then more common practice of polyculture. Today however, with more and more farms becoming "monoculture," or planting only one crop for the season, bees have a far smaller window of time when they can pollinate. "If the farmer plants one or two products a season, then the bees don't have anything to forage on after the bloom is over with," Kelley said.

Another concern cited by both Kelley and the EPA is the prevalent use of pesticides and/or genetically modified farming. GM corn, for example, typically kills any insects that eat it, (or turns them into mutant pests, requiring additional pesticides). While bees don't pollinate corn, "there's a whole bunch of GMO products out there that the bees do visit," said Kelley. Beyond farming, the prevalence of chemically treated lawns on private property has led to a loss of naturally occurring wildflowers like dandelions, a bee favorite.

Still a third possibility is that bee populations have been decimated by the emergence of the invasive Varroa mite. The parasite, which attaches to bees externally, can significantly reduce bee lifespans and lead to deformations in rising generations of the colony. Left untreated, mite infestations can destroy colonies in a way often confused for normal wintertime die off. Killing the mite often requires chemical treatment, potentially creating a vicious cycle.

Incalculable impact: The importance of honey bees to the American economy and food supply cannot be overstated. Nationally, the bee industry annually contributes more than $15 billion of additional value to American crops. Bee pollination, too, is essential for an enormous number of fruits and vegetables that Americans eat everyday, including, apples, peaches, strawberries and cherries. Less familiar bee-pollinated crops, like alfalfa and clover, provide a critical source of animal feed for American livestock.

What it all adds up to is that bees are more than just a nuisance put on Earth to sting people. The tiny insect plays an outsize role in both the long-term health of the United States, and of people around the world. If America's natural ecosystem is becoming unsustainable for this fundamental building block of the food chain, it's a serious problem that cannot wait any longer to be addressed.