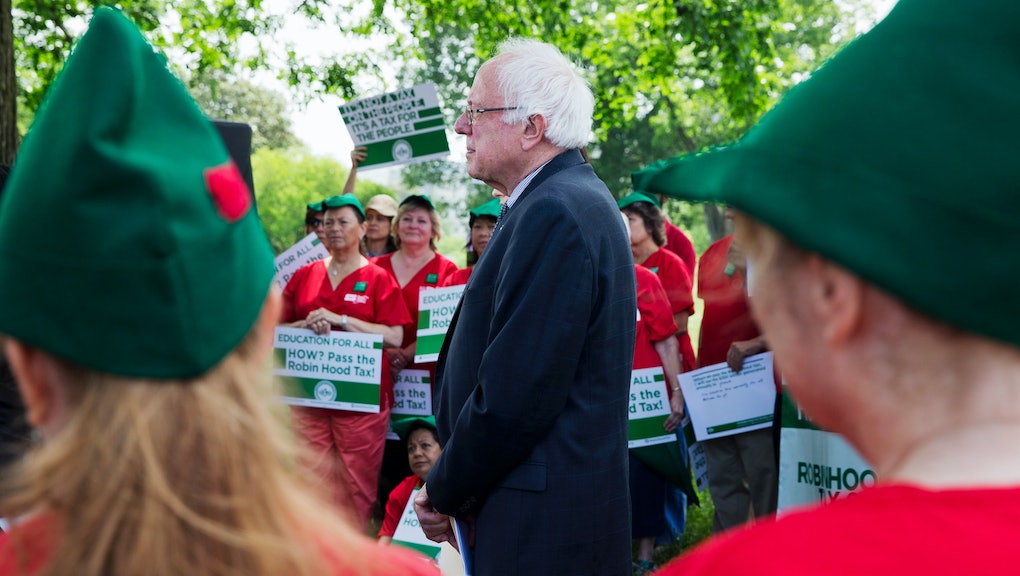 In One Quote, Bernie Reveals the One Thing Preventing Free College From Becoming a Reality

Speaking at a press conference outside the Capitol Tuesday morning, Sen. Bernie Sanders (I.-Vt.), a candidate for the Democratic presidential nomination, unveiled a new bill intended to provide free tuition at public colleges and universities and pull American students out of the rapidly sinking morass of debt.

"This is not a radical idea," Sanders said, responding to a reporter's question about the prospects for the bill's passage. "Only in a Congress dominated by Wall Street is this a radical idea."

The College for All Act would eliminate tuition and fees for students at public schools in the U.S. through a mix of tightened restrictions on spending by state-funded institutions of higher education and significant federal aid to the states, to be offset by new taxes on financial transactions. Supporters who gathered for the announcement greeted Sanders with a chant calling for that so-called "Robin Hood Tax," which in this case begins with a charge of "50 cents for every $100 of stock trades on stock sales," according to a concurrent statement from the closely aligned medical workers' union, National Nurses United.

Sanders cited Germany, which made college free in 2014, Denmark, where students are paid to pursue post-secondary education including graduate school, and other Scandinavian countries with systems built to sustain higher education, free of cost, as the models for his legislation.

"It is time for a fundamental change in the financing of higher education," Sanders said on Tuesday. Here's how he proposes to do it:

The idea for a Robin Hood Tax is not new. But Sanders is the highest-profile American lawmaker to connect it directly to a major policy proposal.

"This legislation is offset by imposing a Wall Street speculation fee on investment houses, hedge funds, and other speculators of 0.5% on stock trades ... a 0.1% fee on bonds and a 0.005% fee on derivatives," Sanders' office said in a summary of the bill.

Beginning in 2016, that new revenue would be used to provide public colleges and universities with 67% of the cost of tuition for fiscal year 2015, with states required to cover the remaining third. In the subsequent three years, the federal government would meet the 2016 figures, then offer to match any additional spending by the states.

2. Restrict spending by colleges and universities.

There are strings attached to all that new cash.

According to Sanders' office, states "will need to maintain spending on their higher education systems, on academic instruction and on need-based financial aid."

In a nod to to teachers and professors, federally funded institutions will also be required to "reduce their reliance on low-paid adjunct faculty," who are often used as to fill the void created by a decrease in more expensive full-time or tenured positions.

Even if colleges and universities became tuition-free, full-time students would still require aid for expenses like books, food and housing.

Under the current law, those students and their families are required to submit a new Free Application for Federal Student Aid before every school year. It is an exhausting and exacting process riddled with redundancies. In Sanders' bill, the process is simplified and made a one-time-only exercise. As explained in the bill:

"A student who attends an institution of higher education in the eligible State may submit a single Free Application for Federal Student Aid ... to be used as the application to determine the need and eligibility of the student for financial assistance under this title during the official length of the student's proposed postsecondary degree program."

Translation: Because the cost of college will now be in the hands of the federal and state governments, prospective students need only submit their plan — four years of undergraduate studies for most high school grads — for vetting before beginning their studies.

The graduates from the class of 2015 are the most heavily indebted in American history. Under the current system, they will carry the weight of those loans — an estimated average of $35,000 before interest — for decades.

The College for All Act would "cut [interest rates] almost in half for undergraduate students, dropping from 4.32% to just 2.32%," according to Sanders' office. "In addition, the legislation would ensure rates never rise above 8.25%" and "enable borrowers to refinance their loans based on the interest rates available to current students," essentially allowing students in debt to constantly be in the market for better rates more in accord with a dynamic economy.

Dream restored? "We used to have great universities tuition-free. Today they are unaffordable. I want a more educated work force. I want everybody to be able to get a higher education regardless of their income," Sanders said in a Sunday press release touting the new legislation. On Tuesday, he was typically blunt and emotional.

"This is not what America is supposed to be about," Sanders said, reviewing the laundry list of obstacles faced by students from low-income households. "This disgrace has got to end."

Though passage of his bill seems a long way off, the "democratic socialist" presidential candidate — now rising in the polls — has provided yet another master class in driving what many had considered a progressive pipe dream to the forefront of the 2016 campaign.