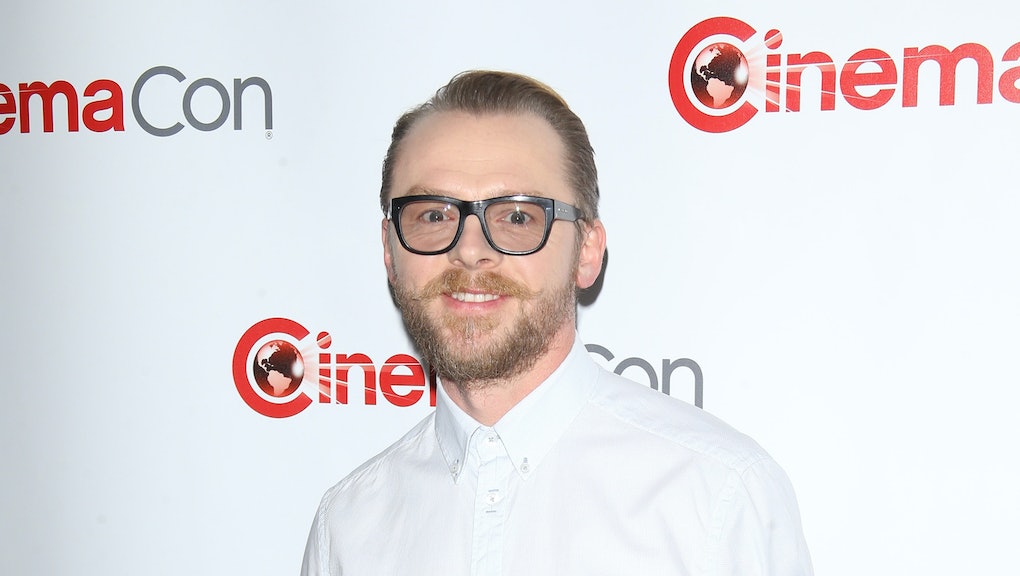 For a guy known for his participation in the Star Trek movie franchise, Simon Pegg seems to really hate sci-fi movies.

In an interview with RadioTimes, the Mission: Impossible — Rogue Nation star said he's considering turning away from geek culture soon, citing what he called superhero and sci-fi films' "childish" nature.

"Part of me looks at society as it is now and thinks we've been infantilized by our own taste," he told RadioTimes, admitting he's been a huge sci-fi film fan in the past. "Adults are watching this stuff, and taking it seriously!"

Not only is Pegg's statement hypocritical, it's also totally wrong. It's a broad generalization that lionizes other genres at the expense of one that's hosted some of the smartest tales in cinema history.

In the interview, Pegg was speaking specifically about Avengers: Age of Ultron. Admittedly, Ultron is not a smart movie. The criticism of that film is fair. What's unfair is to say one genre is infantilizing its audience as a result.

Look at another sci-fi movie in theaters right now, Ex Machina. It shares a bit of DNA with Ultron, particularly in how it uses artificial intelligence as a theme. However, Ex Machina is an incredibly intelligent film. It's challenging, asks deep questions and doesn't cover up its story with lots of big-budget action scenes.

Even a cursory glance at history reveals Pegg's argument to be even more flawed. The Planet of the Apes movies are thoughtful, careful allegories, and the most recent entries have been hugely critically acclaimed. Captain America: The Winter Soldier, a Marvel movie, was one of the sharpest superhero movies in years.

Conversely, recent comedy Hot Pursuit and drama American Sniper weren't exactly stellar examples of their genre. Of course, those failures don't represent the other films in their genre — but then again, neither should Ultron represent superhero and sci-fi movies.

Pegg's other point was about how the current state of cinema is worse than in previous eras, saying the dominance of one genre is leading to a "dumbing down" of material and pulling focus away from what's happening in reality. "Films used to be about challenging, emotional journeys or moral questions that might make you walk away and re-evaluate how you felt about whatever," he told RadioTimes. "Now we're walking out of the cinema really not thinking about anything, other than the fact that the Hulk just had a fight with a robot."

Throughout history, there have been good films and bad films, smart movies and dumb movies. There's nothing about this period that makes it worse beside the fact that we live in it. In 50 years, movies like Ultron won't be remembered as representative of the time, but as footnotes.

As Pegg wrote on his own blog in response to the controversy, he over-exaggerated a bit. "Maybe I was being a little bit trollish," he admitted. "I can be a bit of a Contrary Mary in interviews sometimes." That said, despite declaring himself "still a nerd and proud," he stuck to his guns in asserting that flash is overriding substance in current major sci-fi and superhero films.

Throughout history, there have been good films and bad films, smart movies and dumb movies. There's nothing about this period that makes it worse beside the fact that we live in it.

While his rethink is appreciated, considering he's enjoyed major success thanks to exactly what he was condemning, his position still looks pretty tone-deaf. Right now, he's co-writing the third Star Trek film of the recent reboot, so clearly his objections to the genre aren't too pronounced. How the film's script turns out will be an interesting test: Will it go for something deeper, or will he succumb to what he calls "spectacle" in his post?

If Pegg is tired of what comes with modern sci-fi and superhero movies, he's more than welcome to move on. In part, he already has: His rom-com Man Up, coming later this year, is fantastic. He has real potential as a romantic comedy star, and he should be able to make a second-wave career. Hopefully he doesn't turn on that genre in a moment of playing "Contrary Mary," too.