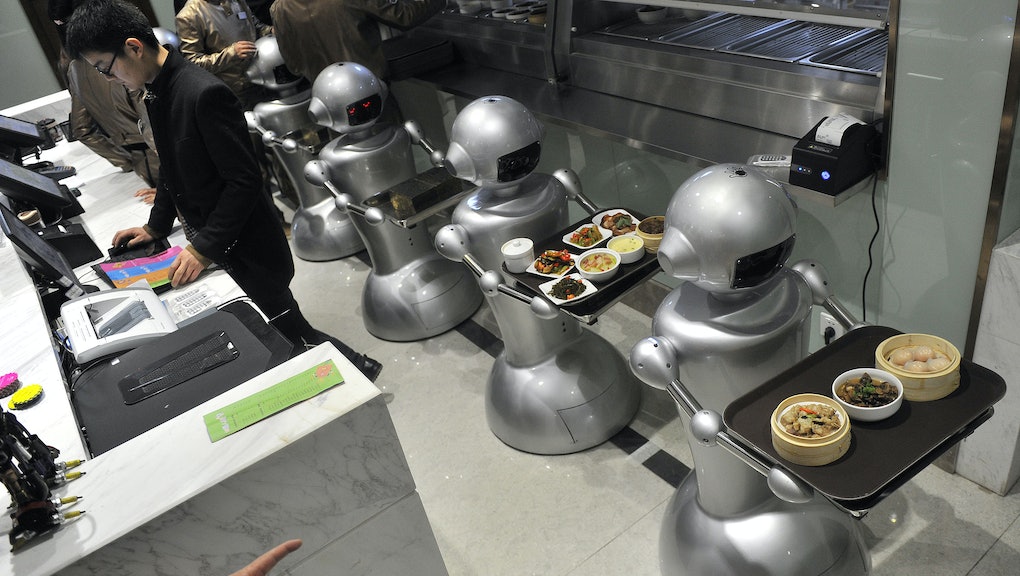 9 Awesome Ways That Robots Are Helping to Save the World

Earlier this year, a group of human rights activists flew to Geneva to argue against the production of autonomous, weaponized robots. Until we create better laws to govern this technology, they argued, we should stop making killer machines — you know, like the one from Terminator.

But for the amount of fear surrounding robots that could (but probably won't) end human existence in the near future, there are plenty of bots running, rolling and flying to save lives and the planet they belong to.

Militaries are some of the earliest adopters of robots in the field, and for good reason. According to UNICEF, there are over 110 million land mines and other explosives still buried around the world from past wars. They couldn't even be removed thoroughly enough to avoid warning the Lord of the Rings film crew of the potential of explosive death. Because of this, military operations try to find buried explosives, both in their own homelands and on roads on the way to an enemy territory.

This is the terrain of vehicles like the Digger D-3. A remote-controlled tank, the D-3 looks like an armadillo with a big piece of farm equipment in front. It's used to slap the ground with chains, exploding mines underfoot and taking the brunt of the explosion — which, from the video, doesn't seem to have much of an effect.

Doctors perpetually have their hands full with patients. And while there are plenty of technologies to help doctors, only recently have robots stepped in to lend a hand — or several. Aethon's Tug robot is basically a medical R2-D2, able to find its way around a hospital carrying prescriptions, multiple rooms' worth of food, medical waste or dirty sheets.

According to Wired, each robot travels, on average, 12 miles a day around the hospital to perform these tasks, cutting way down on time-consuming jobs that take able-bodied residents away from talking to patients.

3. And one day, Tug might bring supplies to this Da Vinci surgery robot.

The current version of the system still requires a surgeon to operate it, but it may not be long before we see small robots like this one performing independent surgeries, operating as a very small second set of hands when there's already too many cooks in a body cavity.

4. The Quince robot keeps workers safe from exposure to radiation.

The Fukushima-Daiichi nuclear power plant meltdown in March 2011 left radioactive debris in the reactor buildings. It needed to be cleaned up to keep the situation from escalating and canceling out the progress already made. For that, you need a robot.

Workers at the power plant operate the radiation-density-mapping Quince. This robot looks like a stunt R/C car, and it's equipped with three cameras, a cable cutter and a radiation monitor. It has studded wheels and tracks so it can climb into (and more importantly, out of) places with high levels of radiation. This way, if the area hasn't been confirmed as safe for humans, the Fukushima staff won't risk exposure to dangerous levels of nuclear waste and radiation.

In this year's DARPA Robotics Challenge, the Department of Defense declared the winner of the competition would be a robot able to perform complex humanitarian tasks, like search and rescue in dangerous, degraded environments — doing the jobs governments can't normally ask other humans to do. Atlas was created to perform search-and-rescue tasks and was a finalist in the challenge in 2014.

This year, the robot's requirements include the ability to drive a utility vehicle, travel across rough terrain, remove debris blocking an entryway, open a door and enter a building, climb an industrial ladder, break through a concrete panel (with a tool), locate and close a valve near a leaking pipe and replace a component (like a cooling pump) — basically, the base-level needs of an emergency responder.

According to TrueCompanion founder Douglas Hines, the first sex robot was actually supposed to help around the home, taking care of, say, people with Alzheimer's.

But when the funding from Medicare wouldn't support the purchase of an in-home robot, Hines switched his focus to robotic sexual companions. "There was a real opportunity to apply this technology into a new industry and breathe a lot of new life into it and create opportunity and a lot of added value," Hines told Discovery News. Robots like this one could be an outlet for disabled veterans. They could also be used to make contact with partners over the Internet.

The video below may be NSFW.

7. NASA's Curiosity rover shows us what life could be like on the surface of Mars.

We aren't yet ready to send an astronaut to Mars. But NASA's already sent an autonomous robot named Curiosity to the surface of the Red Planet. Curiosity has already sent back images of the surface, including the Mars sunset, helping scientists understand more about what could be a potential home for humanity in the future.

8. Protei is a boat that could clean up the ocean.

After the 2010 Deepwater Horizon Oil Spill in the Gulf of Mexico, 4.9 million barrels of oil were dumped into the Gulf of Mexico. And even half a decade later, it's still not clear how much cleaner it's going to get.

That's where Cesar Harada's Protei comes in. The automated boats are used to monitor pollution in the water, and can comb over the ocean to get readings and send them back to shore. Eventually, according to Harada, they'll be able to pick up and help clean refuse from the ocean. Right now, the boats aren't available for retail. But the "Optimist" Kit, a version for home builders, is available as instructions.

Farming is a massive industry and offers jobs to thousands of people. But what if some of those environments could be taken over by autonomous robots? For instance, they could be put in vertical urban gardens, which may begin popping up in metropolitan areas and handle massive amounts of produce growing. Since they're so automated already, and need minimal attention, these gardens, paired with Harvest Automation's HV-100 harvesting robots, could provide actual tons of fruits and vegetables for people around the world.

As new technology and artificial intelligence improves, conversations about the possibility of robots taking over will continue to rise. But these are perfect examples of how automation, or near automation, can make a massive impact and shine a bright light on the future of the planet.