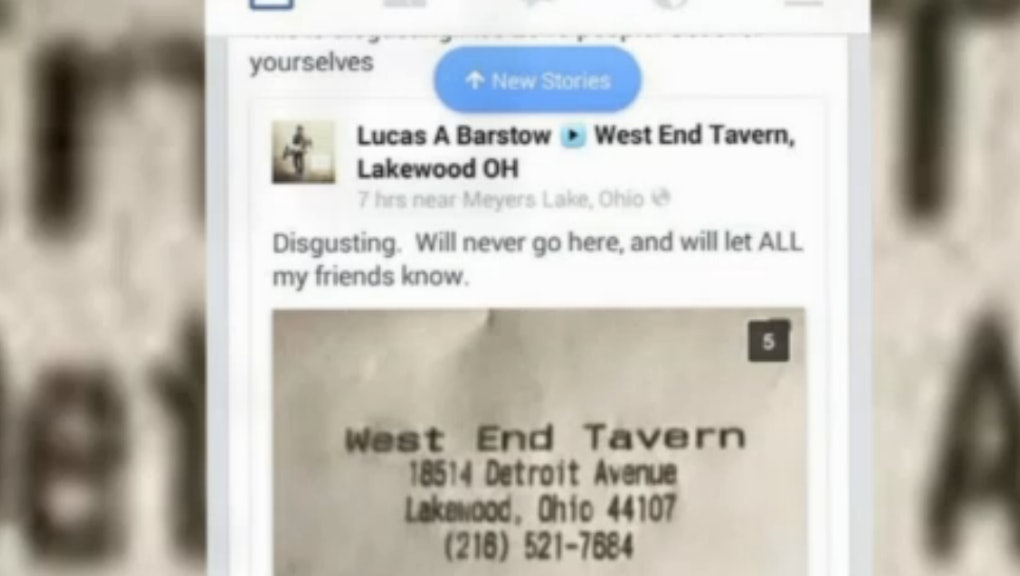 This Restaurant Receipt Is Going Viral for the Worst Possible Reason

An Ohio bartender is finding herself on the rocks after an unfortunate joke she made to a friend on the job.

Alissa Maugen was working Sunday in Lakewood West End Tavern in Lakewood, Ohio, when she handed a receipt back to a group of her friends. Rather than writing her friend's names, Maugen decided to go in a different direction, referring to them by an anti-gay slur.

Another friend saw the receipt after it was passed around via snapchat and uploaded it online. It soon after went viral on Facebook.

In an interview with local WEWS-TV, Maugen agreed the word was offensive but maintained no malicious intent.

Andrew Rollings, Maugen's friend and one of the recipients of the receipt, also felt it was just a joke between friends.

But once online, it was only a matter of time before hundreds of social media users began attacking West End Tavern's Facebook page and Yelp profile.

"It's just a terrible situation," Parnell Egan, the restaurant's owner, told Mic. "We are terribly saddened." Egan added Maugen has been suspended while the situation is being investigated. While he stressed this was an isolated incident intended as a joke between friends, he did not attempt to downplay its seriousness: "Anybody would be offended by this, LGBT or straight, it doesn't matter."

Maugen's case of a seemingly harmless joke, tweet or photo going viral (with or without context) is becoming increasingly common. In one well-documented example, former IAC senior corporate communications director Justine Sacco's career famously imploded after she tweeted, "Going to Africa. Hope I don't get AIDS. Just kidding. I'm white!" After the fact, Sacco also said she was trying to make a joke.

To her point, Maugen's receipt was originally intended to be a friendly, private joke between friends. However, printing the slur on official restaurant receipt while acting on behalf of the West End Tavern adds quite a bit of weight to the situation. Furthermore, while Maugen's case may be a bit more excusable given the context, it still does not let her off the hook. The Internet has no interest in the innocent intentions she may have had.