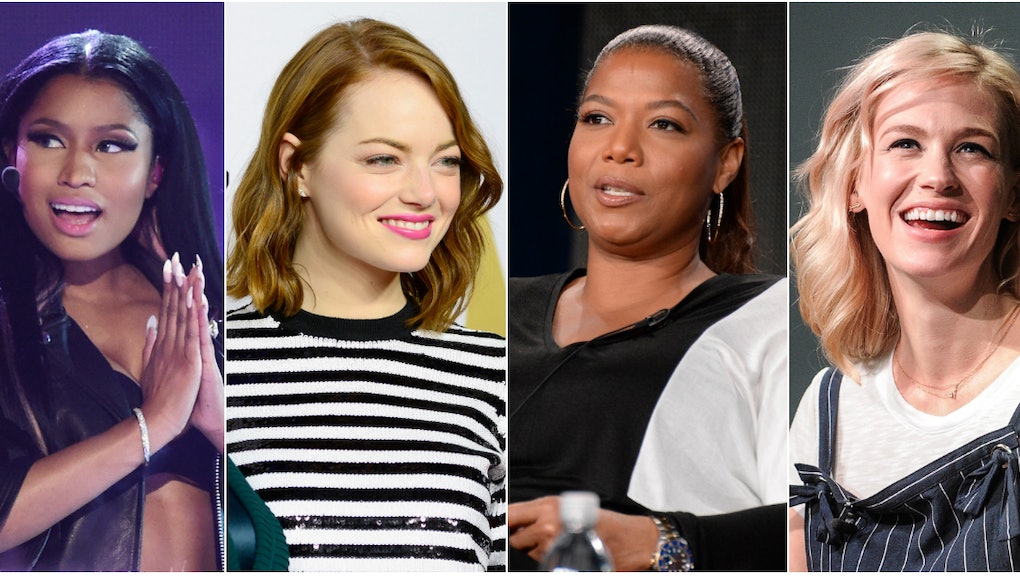 That was the bewildering question posed to Jennifer Lopez on the Billboard Music Awards red carpet last weekend by Giuliana Rancic. Lopez said she was indeed "solo," but Rancic kept pressing, asking, "No one hiding back there? No? No one you're meeting inside?"

Even if Lopez had brought a date, a man should have been beside the point. The world seems determined to pair off women in relationships, with a relentless focus that ignores their other accomplishments or their own desires. After all, according to a 2019 Pew Research poll, a half of single adults aren't looking for any type of relationship, and another 10% are only interested in casual dates. And yet, so many women find themselves on the receiving end of pesky questions and comments from well-meaning friends or relatives: Are you seeing anyone? Tell me about your love life. Why aren't you engaged yet? When's the wedding date?

Just as there's no reason to give into society's pressure to follow that roadmap, there's no reason to answer the questions — at least not seriously. We have better things to talk about and more interesting accomplishments to celebrate. Oh, and it's nobody's damn business.

These 16 women expertly shut down questions prying into their love lives. Take note for the next time a guy asks about your love life, or when you need a funny reply to "Who is your crush?" (Ugh.)

1. Rihanna: "Wow, how disappointing was that question."

When a reporter asked Rihanna if she would be visited by Ashton Kutcher (her rumored beau at the time) while promoting her movie Battleship in 2012, her response was swift. "Wow, how disappointing was that question," she said. "I'm happy and I'm single, if that's what you're really asking." Unfortunately, she had to deal with similarly invasive questioning two years later at the launch of her men's fragrance, Rogue. In response to a reporter asking what the star was "looking for in a man," Riri said, "I'm not looking for a man. Let's start there."

After being asked by British Vogue in June 2010 if she was in love (an allusion to her beau at the time, Alex Rodriguez), Diaz refused to let her happiness be defined by her relationship status, according to Us Weekly. "You know what? Yes I am," she said. "I'm in love with life." Her cheeky reply was a much-needed reminder that significant others aren't the only things that earn our love.

3. January Jones: "It's our right to have secrets."

As the famously tight-lipped actress told The New York Times in 2013, not everyone's personal life details need be subjected to scrutiny by others, much less a voracious public. Asked again about her off-screen romances, Jones merely said, "I'm not trying to sell myself... I wouldn't know how." There's no need for her — or any of us — to.

Grande responded to Mario Lopez's question, "Are you single or are you in a relationship?" during a 2014 iHeartRadio interview by redirecting it to the important stuff — her work, which was the whole point of the appearance. "I love... my album that's coming out in seven days," the singer said. This wasn't the first time Grande deflected relationship question. That same year, she told Matt Lauer on Today, "I'm happy," and turning the tables on Ryan Seacrest: "Why are you doing this to me?" In 2020, Grande — who was dating her now-husband Dalton Gomez — revealed how painful it can be to talk about and publicize your relationship. "Sharing special, personal life things that make u happy on the internet can be truly traumatic," she wrote in a comment on Florence Pugh's Instagram post about the hateful messages the actress was receiving regarding her own relationship.

5. Queen Latifah: "Assume whatever you want."

In a 2008 interview with the New York Times, Queen Latifah shut down questions about her sexuality, ones she's had to face again and again despite reiterating that it's her business and no one else's. Who you love and how is the most personal of matters — and not one that needs to be subject to scrutiny just because.

6. Kristen Stewart: "I'm not going to give the fiending an answer."

Stewart spent seemingly an eternity in the "are they, aren't they" rumor phase with Robert Pattinson. When the two faced a slew of reporters at an Entertainment Weekly roundtable in 2009, she said she had no new responses to the speculation — because no matter what she said, people will assume whatever they wanted.

In a 2014 interview with E! News, Swift responded to personal questions about her dating life by saying she had all sorts of love in her life, but that wasn't the point. She was happy with or without a relationship; and, as she told Vanity Fair in 2013, the relentless focus on her love life and her lyrics "is frankly a little sexist."

When Kendrick was asked on Anderson Cooper Live! in 2008 why she doesn't make tabloid drama with her relationships, her answer was simple: She's boring. There's nothing wrong with focusing on yourself instead of dating — or saving your exciting dating stories for your close friends.

9. Lorde: "Was this supposed to make me feel something?"

When Odd Future rapper Tyler, the Creator Instagrammed a picture of Lorde and her boyfriend with the caption "Hhahahahahah," Lorde quickly called him out. It's just one of too many racist insults aimed at Lorde and her boyfriend, who happens to be Asian. Lorde's response, mature and direct, called out the notion that anyone has a say in her personal business.

10. Jennifer Aniston: "If you don't like the way [my love life] looks, then stop looking at it!"

Millions of people get divorced, and yet Aniston's split from Brad Pitt — and her subsequent unmarried status — has prompted years of questioning and judgment over her "sad" life. In the December 2008 issue of Vogue, the actress took issue with the assumption that the lack of "traditional" love life post-divorce means a lack of happiness. (Now that she's engaged, she fends off similarly judgmental questions about childbearing, like a pro.)

11. Keira Knightley: "Are you going to ask all the men that tonight?"

Knightley's as famously tight-lipped about her personal life as she is outspoken about sexism. When asked at the 2014 Hollywood Film Awards, how she balances personal and work life, Knightley called out the double standard inherent in the question. No woman should have to dish about her love life for no good reason.

When Lopez questioned Dobrev on Extra TV about if there was "anyone special" in her life, she responded, "Uh ... me!" When he challenged that she couldn't date herself, she simply responded, "At the moment I am." She's not choosing to be single, she's choosing to be happy — and he and everyone else will have to accept that.

13. Mindy Kaling: "I don't need anyone to take care of all my needs and desires."

Kaling nailed her response to a question from Good Housekeeping about her love life and goals. Wanting to date or be married are both fine and even appealing decisions, she makes clear, but they're not necessary for living a fulfilling, self-sufficient life.

In response to a Q100 Radio question a few years ago about who she would call on Valentine's Day, Clarkson responded candidly. (She forgot to add that sending yourself flowers is totally acceptable as well.) Answering to society's expectations, especially in the form of Hallmark holidays, is no woman's obligation.

15. Nicki Minaj: "I have never seen anybody's penis in the industry, actually."

When Andy Cohen rudely asked her "Who has the biggest dick in the music industry?" on Bravo's Watch What Happens Live, Minaj found the perfect and equally vulgar way to shut down his assumptions. Hey, sometimes in response to an inappropriate question, the best way is to shock them right back.

16. Emma Stone: "We don't need the attention... but these wonderful organizations do."

If all else fails, take a note from Emma Stone and Andrew Garfield's book and redirect the attention. When they were eating breakfast in a cafe in 2014 and saw paparazzi outside, they harnessed the attention for good, walking out with signs that highlighted their favorite charities.

Take a note from these confident women and screw what other people are asking and expecting of your love life. There are so many better things to be thinking about.

This article was originally published on May 26, 2015