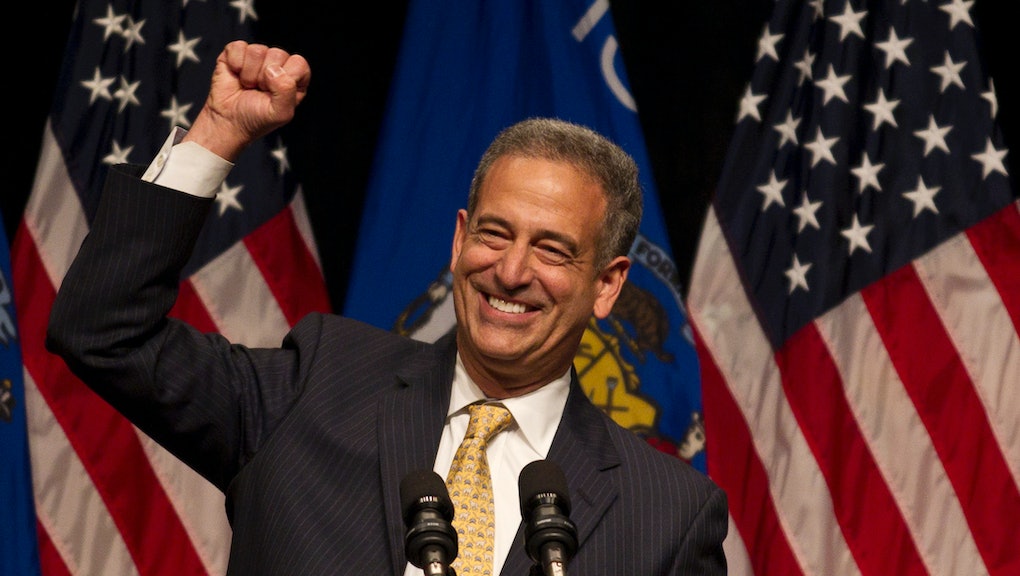 Nearly five years after being swept out of office during the tea party wave of 2010, Wisconsin Democrat Russ Feingold announced last week he is running to reclaim the Senate seat he occupied for three terms — and along with it, his place among the most influential liberal leaders on the American political scene.

In a 90-second video heralding his entry into the 2016 race, Feingold immediately called on voters' concerns "that multimillionaires, billionaires and big corporations are calling all the shots." Days later, in an email to Mic, campaign manager Tom Russell skewered the incumbent, Republican Sen. Ron Johnson, for his "refusal to listen to the state's concerns and his unrelenting defense of the interests of big corporations, billionaires and multimillionaires."

If the rhetoric itself is not especially original, its potential to resonate with the public is uniquely suited to the moment. In a year when Sen. Bernie Sanders (I-Vt.) is pushing the pace against Democratic frontrunner Hillary Clinton in their presidential primary, and Massachusetts Sen. Elizabeth Warren has emerged as one of the most influential Democrats in Congress, Feingold's decision to enter the race represents another major victory for the resurgent populist left.

Feingold's remarkable record: Back when Sanders stood as a vocal but little-known congressman and Warren only saw Capitol Hill when she visited from her teaching post at Harvard, Feingold reigned as the Senate's progressive champion. But in the second year of President Barack Obama's first term, after a long and historically costly fight to pass health care reform, his bid for a fourth term was denied by Johnson. Talking Points Memo described his ouster as "The End of a Progressive Champion."

On a range of issues, from the Iraq War (which he opposed and voted against in 2003) to same-sex marriage (which he publicly backed as early as 2006), Feingold has consistently come in ahead of the always "evolving" conventional political wisdom. When he was contemplating running for president in 2008, many believed he was too far to the left of then-likely candidates and Senate colleagues Obama and Clinton, the latter of whom backed President George W. Bush's invasion. He eventually decided against a run.

Like Obama, Feingold was skeptical about the invasion of Iraq from the outset. On Oct. 11, 2002, he gave a memorable and provocative speech about why he would not vote to give Bush the go-ahead to invade.

"Both in terms of the justifications for an invasion and in terms of the mission and the plan for the invasion, Mr. President, the administration's arguments just don't add up," Feingold said. "They don't add up to a coherent basis for a new major war in the middle of our current challenging fight against the terrorism of al-Qaida and related organizations."

On the question of the Patriot Act, the senator from Wisconsin cast the lone vote of dissent in the Senate against the original 2001 bill, as the rest of his colleagues were bending to intense political pressure being ginned up by the White House.

His critique of the measure was prescient. "Under this bill, the government can compel the disclosure of the personal records of anyone," Feingold said at the time. "Perhaps someone who worked with, or lived next door to, or went to school with, or sat on an airplane with, or has been seen in the company of, or whose phone number was called by the target of the investigation."

Feingold's lonely stand has been vindicated by the courts (with a hat tip to the Edward Snowden disclosures) and a national surveillance state that promptly acted on all of the Patriot Act opponents' worst fears of overreach.

Ready to fight big money: Feingold's defining act during his three terms in the Senate was a bipartisan deal he struck with Sen. John McCain (R-Ariz.) in 2002 to overhaul federal campaign finance regulations. After years of work, the Bipartisan Campaign Reform Act (which became known as "McCain-Feingold") addressed concerns from both parties about the effects of outside money — usually in the form of "soft money" collected by the parties, but not regulated under normal campaign finance law — on the democratic process.

Critics argue that McCain-Feingold pushed out moneyed moderate voices, creating a vacuum since filled by the more extreme elements of both parties. This is a limited logic that treats the powerful interests (the Koch Brothers come to mind) now dominating the campaign finance world as having luckily wandered onto their perches. The reality is that, while the legislation had its attendant flaws, it is and remains the most robust effort to curtail the influence of big money in politics of this generation.

In 2010, the Supreme Court struck down key provisions of McCain-Feingold in its Citizens United v. FEC decision, lifting restrictions on political spending by corporations. Overturning the court's ruling has since become a key priority for Democrats, especially liberals like Sanders and Warren.

The outlook for 2016: It's not just Sanders and Warren who are talking about Citizens United. Clinton too has said she would make the promise to overturn the ruling, which struck down key elements of the McCain-Feingold law, a litmus test for any potential Supreme Court nominee. The mainstream of the party is clearly moving toward Feingold.

Meanwhile, Wisconsin seems to be turning on Johnson. Feingold leads the Republican by double digits in early polling. Johnson, meanwhile, has attempted to fend off a BuzzFeed report released Wednesday on his musings over whether Obama can be "trusted" more than Iranian leaders on the substance of their potential nuclear deal. The Republican's comments have passed without notice or even been celebrated in 2010, but the tide has turned away from that brand of rhetoric.

For Feingold and his liberal Democratic allies, the seas ahead are looking a lot more friendly. Expect to see Warren and Sanders dropping in to offer their support as he begins to campaign in Wisconsin. It's a natural fit, and a scene Americans should get used to as the progressive left, bolstered now by the return of its old "champion," continues to grow its influence inside the Democratic Party.