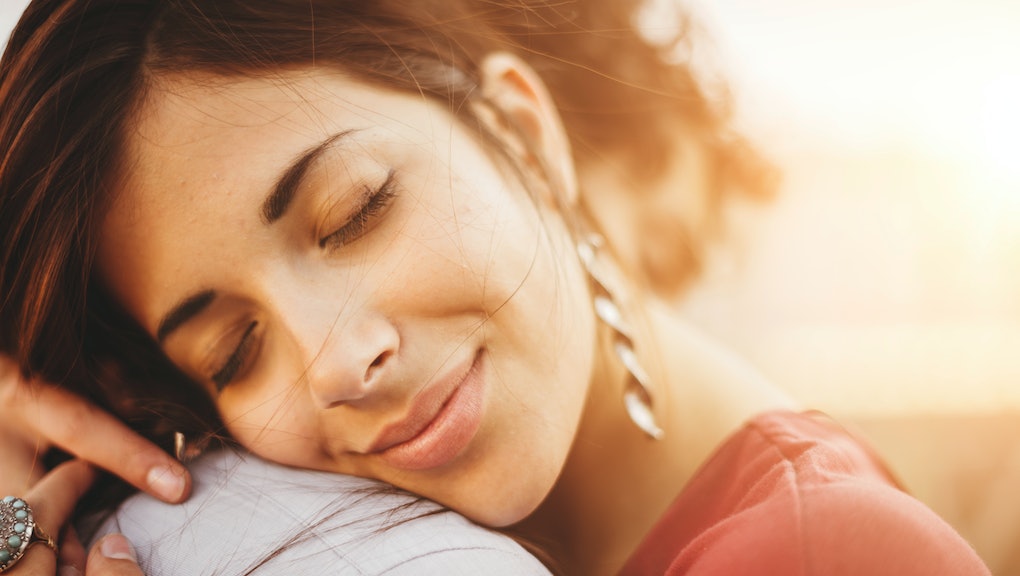 Rory* uses the Internet like millions of other people looking for a connection. She browses through names, ages and descriptions, messages the most appealing men and women she finds and shares with them her own lists of things she does and doesn't like in a partner. They exchange messages and plan a time to get together. When they finally meet, they skip the date and go straight to one of their places.

There's a catch, however. There's no sex. This is a platonic cuddle party.

"Cuddle therapy is so important for me physically and mentally. I crave affection," Rory, 25, told Mic. "It's a great distraction and just feels so good, particularly with cuddle buddies you can trust."

She's part of a small but active community that uses the Internet to connect with like-minded cuddlers. She's a user of the Reddit forum r/cuddlebuddies, where she posts details of her cuddle requests: music, TV shows and marijuana while cuddling are good; a lack of consent from either party is not.

"I've been doing this for years. I'm always looking for new cuddle buddies on dating [or] other social networking sites," she said. "I'm a cuddle monster!"

What is this phenomenon, exactly? The word "cuddle" has been around since the 16th century, and the act itself is even older. Take the recent discovery of a 5,800-year-old couple, for example, who were found buried in Greece, locked in an eternal cuddle.

But the proliferation of the purely platonic cuddle, where the partner is a stranger or nonromantic interest, is relatively recent. In February 2004, Marcia Baczynski and Reid Mihalko hosted a cuddle party in which strangers gathered to snuggle. They then formed an official organization called Cuddle Party, a self-described movement to "reclaim" the option of nonsexual human touch that hosts meetups across the country. This past February, Portland, Oregon hosted the first-ever cuddle convention, CuddleCon, sponsored by Samantha Hess, who markets herself as a professional cuddler.

Like Rory, people who engage in regular, platonic cuddling do it because they enjoy the feel of human touch. "It's well known that positive touch can have a profound impact on your physical and emotional well-being," reads the description of r/cuddlebuddies. Indeed, there are numerous studies that demonstrate how valuable physical affection can be, from improving our immune systems to boosting our production of the bliss-causing chemical oxytocin.

Despite the physical closeness of cuddling, it's not inherently sexual or romantic. In fact, that's one of the central tenets of forums like r/cuddlebuddies: Cuddling isn't a stepping stone to sex. It's the end goal.

"The idea here is to find other people who are looking for some nonsexual physical intimacy, and arrange something that fulfills that goal," r/cuddlebuddies says.

Personal sites like r/cuddlebuddies are different. While cuddle parties, conventions and professional services have turned the cuddle process into an official business, the formality is absent among cuddle duos who meet through Reddit.

It has a much more grassroots feel than something like Cuddle Party, which functions like a marketable, organized machine. It's up to the cuddlers themselves to seek out willing partners and decide on a set of rules beforehand.

This might be why, according to the moderators of r/cuddlebuddies, their users are often one-hit wonders. "The overwhelming majority of users simply make one post, and then never return," moderator DersEvvak told Mic.

Rory, then, is an aberration. "I know the mod is a regular," she told Mic, "but I'm not sure many others are regulars. Most are short-term, I think. Many have throw away accounts. Many talk to me for a while then disappear for no apparent reason, usually when I try to connect elsewhere to make plans to actually meet."

Nevertheless, Rory has met three people from r/cuddlebuddies, and DersEvvak has met one. The first two she "liked well enough, but they didn't work out," but she grew close with the third; they've been regular cuddle buddies ever since.

DersEvvak had a less-than-perfect experience with his meetup: After driving three and a half hours to see his cuddle partner, he noted, "She did not seem interested in cuddling during the encounter." The next day, he said, she deleted her Reddit account.

Then there are the other platforms. Reddit's r/cuddlebuddies isn't the only way to meet cuddle fans. A host of other websites have popped up, and though they resemble dating websites in design and method, they're not intended to facilitate romance.

Cuddle Comfort is one such site. "I've always been someone who really enjoys cuddling," founder Mark Sanger told Mic. "I find it very therapeutic. For me, I don't see it as a hobby but rather a need that we all have, depending on day-to-day circumstances. How often do you have a bad day at work and just want to go home and have a cuddle?"

Cuddle Comfort resembles OkCupid. You can create an account, upload a profile and set your preferences based on age, distance, gender, ethnicity and marital status.

"Looking into cuddling," one profile reads. "Don't really know what to expect from this site, but I am very open to the experience," another reads. "I love to sleep with my arms around a beautiful woman," one user wrote.

Like r/cuddlebuddies, many of the users on Cuddle Comfort are men looking for women. "I've seen that women are more tentative with the idea of meeting up with someone for a cuddle," Sanger admitted. "There is an element of vulnerability with allowing someone to be that close and intimate with you, even if it is of an innocent nature."

Other sites, like Cuddle.Fish, are cut from a similar cloth, and an app called Cuddlr, touted as the Tinder for platonic cuddling, launched this past fall, though it appears to be on a hiatus as of press time.

But the idea of "casual touch" is strange to most people. Cuddling is one thing, but cuddling with a complete stranger is a different animal. "Even those who pursue casual sex tend to reject the notion of casual touch, describing it as 'weird,' 'awkward' or just 'wrong,'" DersEvvak explained to Mic.

These feelings are amplified when the meetup process occurs online. It's a bizarre contrast between something that can feel impersonal (sitting behind a screen) and something deeply personal (cuddling). While one could argue the same is true of traditional dating sites, they're designed with romance and intimacy in mind; cuddling is not.

The creep factor, too, can be difficult to comprehend. Even Rory, ever the cuddle fanatic, admitted that things haven't always gone well. "The second [cuddle partner] bought me a ride on a ferris wheel — awesome! — but then he tried to get fresh with me," she told Mic. "Nope, nope, nope. Boundaries, respect and consent are everything."

It's catching on. Nevertheless, the popularity of r/cuddlebuddies, which has roughly 4,300 subscribers and new posts popping up multiple times a day, along with sites like Cuddle.Fish and Cuddle Comfort, suggests that these sites are on to something.

DersEvakk explained to Mic that platonic cuddling is way to fight societal norms.

"Sharing touch with someone is an expression of vulnerability, something most people instinctively try to keep private," he said. "There are a growing number of people willing to put those common perceptions aside and enjoy the mutual benefits of spending an evening innocently cuddled together on the couch with someone, even if you're not in a relationship with them," though, he added, "that number is still quite small."

For Rory, using the Web to find a friendly cuddler is simply an alternative way to meet like-minded people. "'Regular' dating and socializing is usually unfathomable and super awkward to me," she said. And as a sufferer of erythromelalgia, a chronic pain disorder, cuddling is one of the only things that relaxes her. "I'm so glad I'm able to cuddle," she said. "Some people with my disorder cannot be touched at all. I can't imagine."