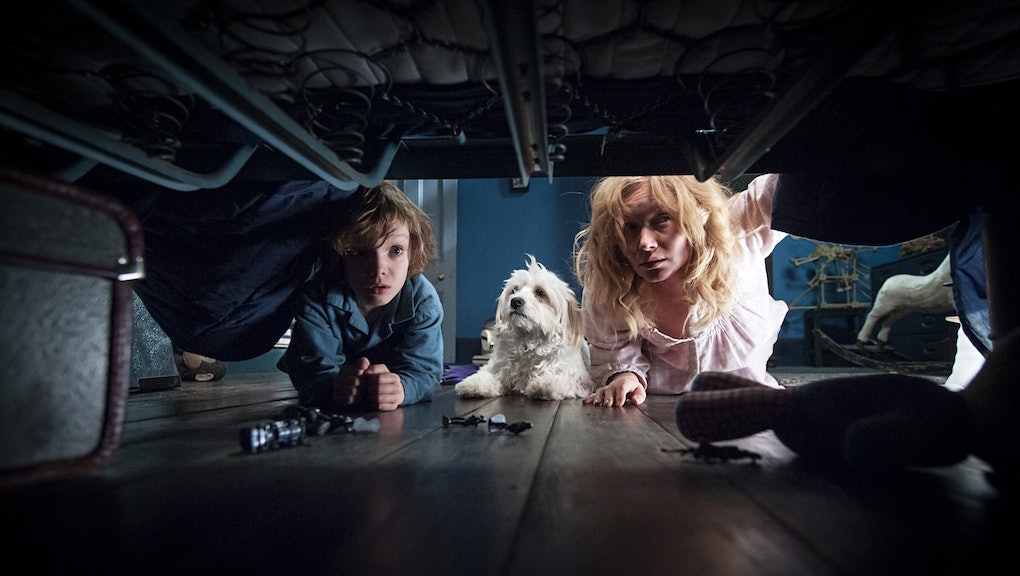 Horror movies are notoriously divisive. How fun is the experience of sitting and being scared for two hours? For some, it's a thrill; for others, it's all "boo" but no good. Yet the truth of the genre is probably somewhere in the middle: There are some movies that frighten, intrigue and compel you, while others are the kind of guilty pleasure you never watch again.

In honor of that dichotomy, we've prepared a list of a dozen horror flicks you can find on Netflix. Half are carefully considered, ambitious projects you'll want to watch again. The other half? Let's just say you'll be dying to turn them off when they're over, but they're a scream to check out once.

Warning: Some of the images included in this piece are not for the faint of heart and certainly aren't safe for work. Reader discretion is advised.

"If it's in a word, or it's in a look, you can't get rid of the Babadook." 2014's best horror film is also one of the best films of the year. This Australian scarefest has plenty of jumps to satisfy your craving for being afraid, but its lingering impact is much more complex. The Babadook explores the crushing fear that comes with PTSD through a mother and son's relationship. It's one of the most beautiful films in the genre.

M. Night Shyamalan has not exactly been at the top of his game for years. You could say the problem started around Lady in the Water and has never been worse than in The Happening. Devil is a bit better than both of those, but not by much. Five people are trapped in an elevator, but one of them is the devil. It's a silly plot and often matches its premise in its execution, but if nothing else, it's good for a laugh at Shyamalan's career.

Before Scream became the first horror metacomedy, Wes Craven's New Nightmare took Nightmare on Elm Street villain Freddy Kruger to a similar kind of place. That place, in fact, was the real world: New Nightmare explores what would happen if Kruger haunted the people who made the movies about him, not just their characters. It's a twisted idea, and it pays off in spades, almost surpassing the original Elm Street film in quiet but disturbed genius.

We don't just hate this movie, we hate ourselves for putting it on this list at all. The demented tale of a German man obsessed with creating a human centipede — that's people connected together by, well, just look at the GIF — was horrifying enough on its own. Then director Tom Six created two sequels, the latest of which comes out this Friday. It's a sickening franchise, but you're probably lying to yourself if you're not a little curious. Just have a barf bag ready.

Not quite a traditional horror film, this movie is instead "the first Iranian vampire Western," as it bills itself. This Iranian film is a bit of a mismash of different ideas, yet it works in a bizarre collage kind of way. You very much owe yourself a trip to Bad City if you haven't yet visited.

This is the original horror movie, if not by fact then by reputation. The Exorcist surprises upon rewatch for how few "scary" moments there really are. It is a slow burn of creepy twists as a girl is taken over by the devil. Frankly, present-day horror movies pale in comparison to this one. The effects may not be as impressive, but the slow corruption of a child is the most terrifying sight of all.

The original Insidious is the perfect scare-only horror movie: The fear it causes is positively delightful. Its sequel, though featuring much of the original film's cast, lost a bit of that magic. It's still worth seeing, if only for its cast: Patrick Wilson and Rose Byrne are well-matched as the mother and father of a family unwillingly connected to the spirits. But definitely check out the superior original elsewhere first. They're both cheap, but the first gives you a bit more to guiltily enjoy.

This is gorgeous vampire movie not about sucking blood but about friendship. Let the Right One In is a Swedish film — there was an American remake called Let Me In, but don't watch that one. The original nails the relationship between its interspecies main characters and presents a striking portrait of what horror can be when it isn't all about fear.

Don't spend too much time wondering how you've never heard of this movie. Because of some crazy distribution snarls, All the Boys Love Mandy Lane didn't come out in U.S. theaters until seven years after its release. Considering it's the kind of flick that includes a girl becoming "hot" between school years and kids getting killed after sexual activity, it probably should've stayed dead.

The best entry in the Scary Movie parody franchise sets its satirical sights on The Ring, 8 Mile and The Matrix, among other properties. You may remember these movies as being mostly empty calories, but there's a bit more going on than that in this installment. The jokes are pretty layered, about the same as a Will Ferrell movie at his prime, and Anna Faris absolutely wins as the lead. Scary Movie 3's perfect for when you want to be slightly challenged to keep up but don't have the brain capacity for the other good movies on this list.

Let's let the Netflix description speak for itself on this one: "A group of randy college kids partying in a woodland cabin gets a nasty surprise when a horde of ferocious zombie beavers attacks." So basically it's Sharknado, but with zombie beavers. Sure, you won't respect yourself after you've seen this, but who doesn't want to see some zombie beavers?