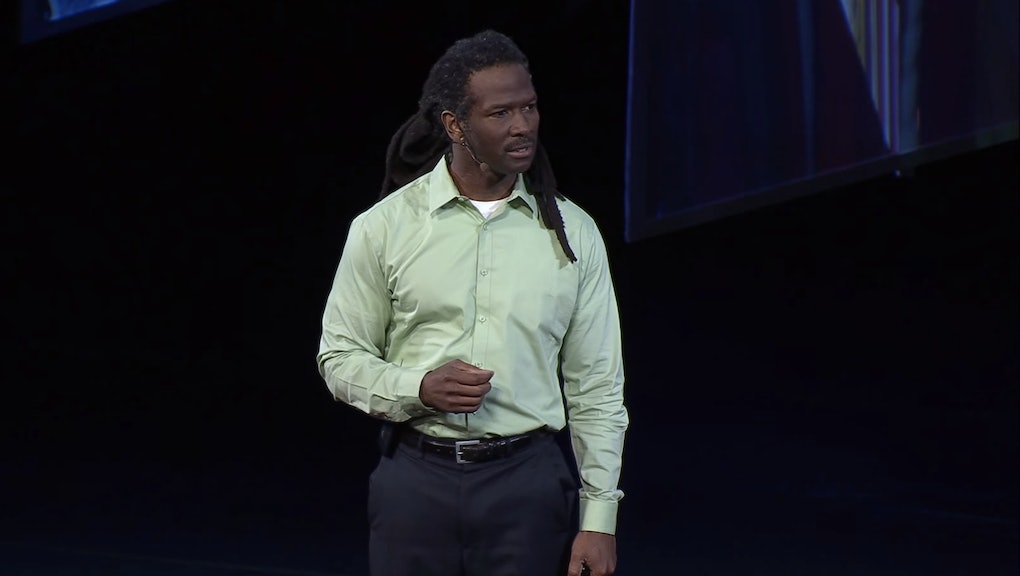 Carl Hart is a professor at Columbia University who explores how people use drugs and the ways they can be treated.

His path to the Ivy League wasn't always certain. As he explains in a recently uploaded TEDMED talk highlighted by the Washington Post, he was raised in a poor neighborhood in Miami. Growing up, he used and sold drugs. He carried a gun in his car, and he committed small crimes. Along the way, he developed the conviction that the prevalence of crime and dysfunction in his community was a product of widespread drug abuse.

Hart's life took a turn after he joined the Air Force. He studied neuroscience, and went on to professionally study the drugs that he was convinced were the source of his neighborhood's social ills. Throughout the course of his research, his views on drugs — and how society should treat drug users — dramatically changed.

Hart's study of drug abuse eventually led him to overturn the beliefs he held as a young man. He doesn't think drugs are the problem. He thinks virtually every way in which we choose to handle them is.

Follow the science: During the statistics-heavy talk, he first focuses on dispelling the myth that people are unable to use illicit drugs recreationally without succumbing to addiction.

The reality is that a vast majority are able to use drugs casually, even ones that have a strong potential for physiological addiction.

Addiction is about circumstance: Of course, for some people, drug addiction is a serious, devastating problem. But addiction doesn't exist exactly as most proponents of draconian anti-drug laws think it does. As Hart describes, the popular notion that one hit of crack cocaine can lead to an all-consuming addiction is rooted in a series of experiments in the 1960s and '70s where scientists gave animals the option to self-administer intravenous doses of hard drugs. When given free rein to consume the drug by pushing a lever, they would typically end up injecting themselves until they died of an overdose.

But when those experiments were later conducted to include an alternative to a hit of the drug, such as a sexually desirable mate or desirable food, animals often opted for the non-drug alternative over the drug. Hart tested this idea with human crack cocaine addicts, and found that addicts chose $5 over a hit of crack cocaine worth more than $5 about half of the time. He found the same with as did methamphetamine addicts. With methamphetamine addicts, he found that when he raised the monetary reward, the choice shifted dramatically:

The same but unequal: Hart also discusses how the absence of a thoughtful, scientifically based understanding of drug use has served as a pretext for senseless disparities in the way the criminal justice system has treated different drugs. In the 1980s, possession of crack cocaine was assigned federal penalties 100 times harsher than powder cocaine, ostensibly because as a drug that produced a more intense high, it was considered more dangerous.

But they are ultimately the same drug. Hart describes how injecting powder cocaine dissolved in water "produces the identical intense effects as smoking crack cocaine." Despite this reality, the U.S. criminal justice system embraced the idea that crack was more dangerous, and used it as a pretext for its discriminatory treatment of African-American communities, where crack cocaine was most prevalent.

Decriminalization is smart policy: Hart then goes on to lay out his belief that all drugs should be decriminalized and should be treated more like traffic fines than serious crimes.

He details how low-level drug offenses have led to a staggering boom in incarceration, which has had a particularly cancerous effect on the black community:

The critical assumption of the war on drugs as it is currently waged is that drug use can be eradicated. Hart argues that the sooner that this assumption is put to rest, the sooner the country can move toward smart drug policy. Abstinence-focused approaches aren't typically used for other pleasurable and risky activities like having sex or drinking alcohol, so why should they be used for drugs?

Hart invited the audience to consider the success of the Portuguese model. Nearly a decade and a half after decriminalizing all drugs, the country has seen drug use decrease by most measures, and dramatic declines in overdose and disease transmission. All the while, they've saved an enormous amount of money by not pursuing criminal charges against people for low-level uses, and protected a significant percentage of their population from the life-altering stigma that accompanies incarceration.

"The drugs themselves are not the problem," Hart said. "The real problems are poverty, unemployment, selective drug law enforcement, ignorance and the dismissal of science surrounding these drugs."

A powerful message: Hart's presentation derives its power from two main sources. The first one is his insistence that the way we understand drug use as a social challenge should draw from a scientific understanding of how they work. The second one is that the discomfort that society feels with the risks of drug use shouldn't cause us to retreat into a kind of puritanism against their use. Instead of waging unwinnable wars against them that ravage society, he argues in favor of education, and changing the circumstances that make most people inclined to become dangerously reliant on them.