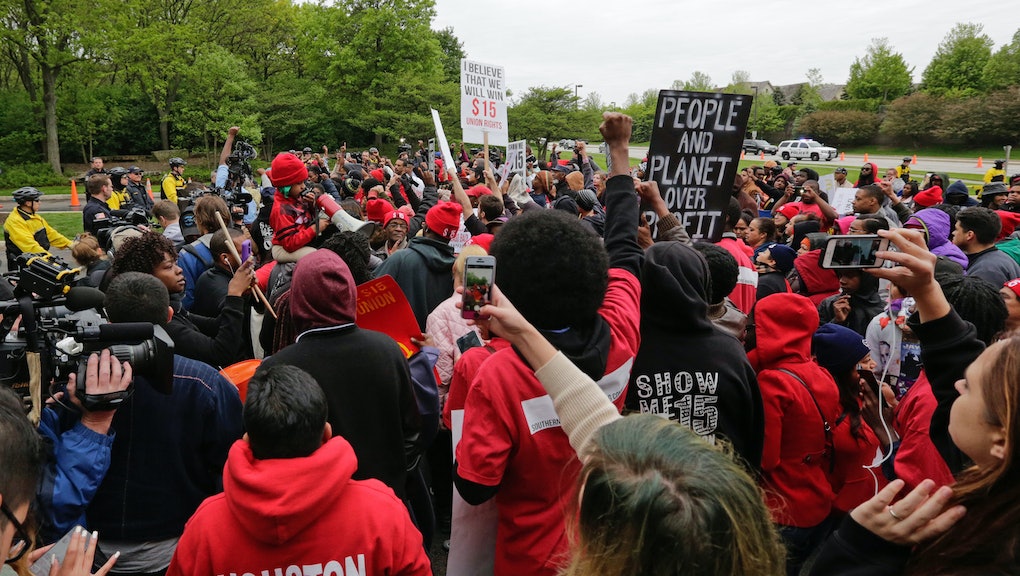 Thousands of protesters, workers and organized labor activists swarmed McDonald's corporate headquarters outside Chicago on Thursday, the latest action in their increasingly public demands for higher wages from the fast food giant.

Before new CEO Steve Easterbrook could address shareholders gathered in Oak Brook, Illinois, for their annual meeting, demonstrators delivered a petition — signed by more than 1.4 million people, according to organizers — calling on the company to guarantee its employees at least $15 an hour and the right to unionize without fear of reprisal.

On April 1, McDonald's unveiled a plan to raise average hourly wages for 90,000 of its employees by the end of the year. But the new $10-an-hour wage falls well short of the movement's demands, and only applies to employees at 10% of all McDonald's restaurants. The other 90% of restaurants are franchises, meaning they are independently owned and operated and set their own wages.

Two weeks after the announcement, Fight for 15 organizers launched a massive round of global protests against the larger fast-food industry. Demonstrations reached 236 American cities and 35 countries around the world, organizers told Mic at the time. By May 4, Easterbrook, who took over as CEO in the beginning of March, laid out the broad strokes of a plan to "shape McDonald's future as a modern, progressive burger company."

Before he could share those details Thursday in-person with shareholders, a group of 10 "delegates" hand-picked to deliver the petitions made their way onto the McDonald's corporate campus. Company officials met with the demonstrators for approximately 30 minutes, a Fight for 15 spokesman told Mic.

McDonald's did not respond to a request for comment, but has previously been dismissive of the Fight for 15 actions. "Historically — out of approximately 800,000 people who work in McDonald's restaurants — there have only been about 10 to 15 actual McDonald's workers who have participated in these staged events," spokeswoman Terri Hickey said in an email during the April 15 global protests.

On Thursday, organizers told Mic the "bulk" of the protesters outside McDonald's headquarters — "at least 1,500" — were currently employed at one of the chain's stores.

Earlier this week, Los Angeles became the largest city in the country to mandate a $15-an-hour minimum wage by 2020, the biggest victory to date for a movement that appears to be quickly evolving into a powerful and efficient political player.

Here are the latest tweets from the demonstrations Thursday in Illinois: