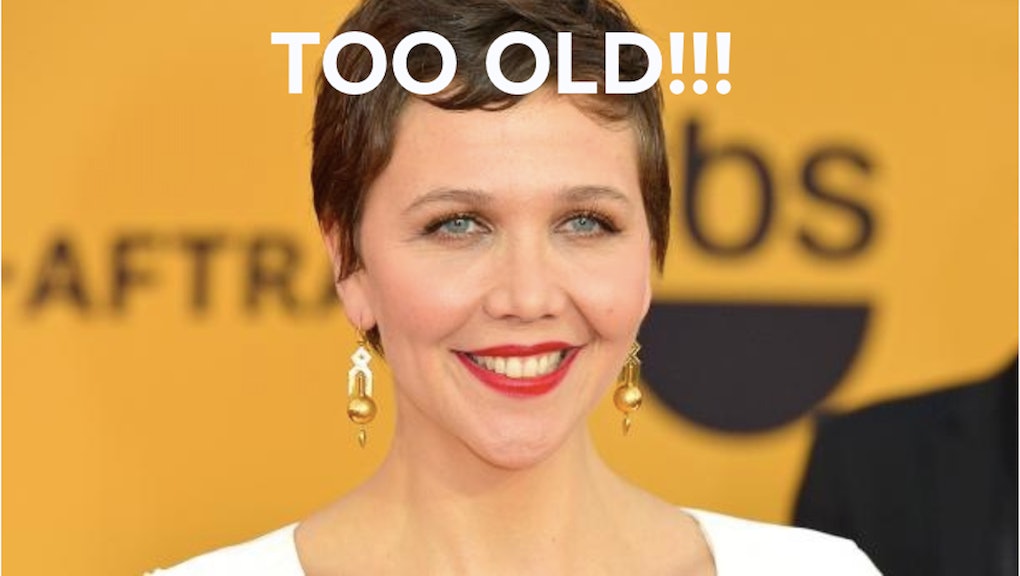 The 37-year-old actress recently told the Wrap she didn't get an undisclosed part because she was "too old" to be paired as a love interest to a 55-year-old male character. But everyone knows as male actors get older, their female love interests stay the same age; after a certain point, actresses are just no longer believable as an object of affection. Just look at screen legend Lillian Gish, who, in three different films, played Lionel Barrymore's granddaughter, then his daughter, then his wife.

Hasn't she realized she's well past her "last fuckable day"? She should just hop in a boat with Julia Louis-Dreyfus and row through their old lady tears. Actor and genius Russell Crowe has the solution: Stop trying to play the ingénue.

Thankfully, we've compiled visual proof that Maggie Gyllenhaal is, in fact, too damn old to play the love interest to someone 18 years her senior.

Maggie is too damn old to get with 54-year-old George Clooney — besides, he'd never marry a 37-year-old woman!

Nope. No. Tom Hanks is 58 years old — clearly she'd be robbing the cradle in whatever installment of The DaVinci Code we're on, and we can't have that!

Daniel Day Lewis is a boyish 58 years old. Maybe this would work if she played Mrs. Robinson in a Graduate remake.

A Baldwin? Get outta here, Maggie! At his 57 years old, you might as well play the wizened crone next to fresh-faced Alex!

Maggie with baby-faced 55-year-old Kevin Spacey. Get some glasses, Maggie — then you can play Claire Underwood...'s grandmother.