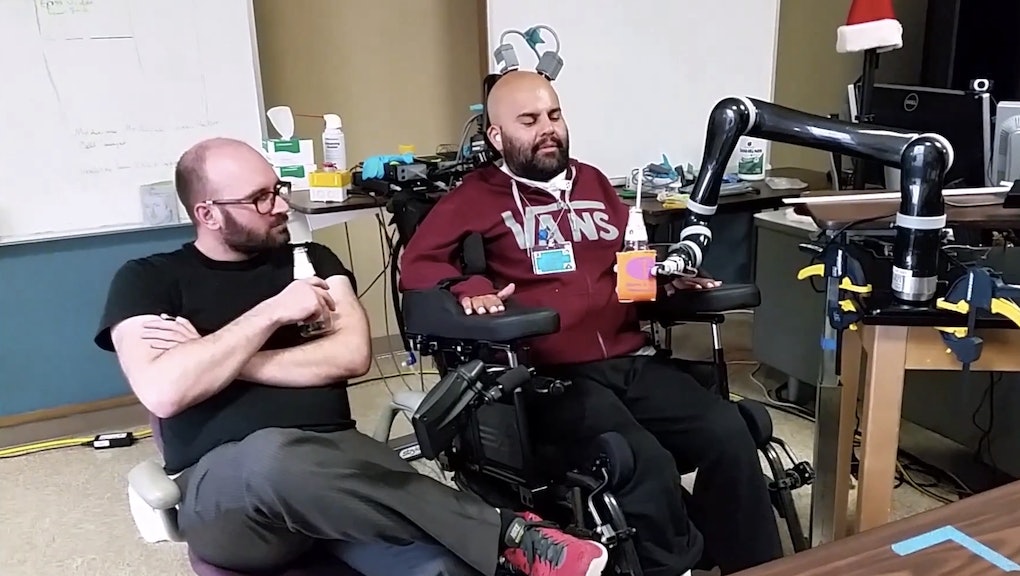 You need to see Erik G. Sorto's smile when he drinks this beer. You've never seen a smile like it before. It's the smile of a man who hasn't brought a bottle to his lips with his own hands in 12 years — because that's when he became paralyzed from a gunshot wound.

Now, thanks to neuroscientist Richard Andersen from the California Institute of Technology, Sorto can use his brain to operate a robotic arm. He can pick up a beer, bring it to his mouth and take a sip from a straw. It's an action most people take for granted every weekend. But it means much more to the 32-year-old.

"I joke around with the guys that I want to be able to drink my own beer — to be able to take a drink at my own pace, when I want to take a sip out of my beer and to not have to ask somebody to give it to me," Sorto said, according to Brain Decoder. "I really miss that independence. I think that if it was safe enough, I would really enjoy grooming myself — shaving, brushing my own teeth. That would be fantastic."

But this isn't just about a dude regaining his independence.

Andersen's team ventured into the unusual science of neuroprosthetics so Sorto could drink that beer.

In the past, electrodes have been planted in the motor cortex, which reads each individual movement: lift arm, reach arm, lower arm, close hand, raise arm, retract arm, tip hand and so on. According to Science, Andersen and his team discovered they could plant the same electrodes in the posterior parietal cortex, the part of the brain that controls intent instead of motor function. The brain can command, simply, "Drink that beer" — instead of the rigorous step-by-step process listed above.

It's a big deal for Sorto. But what this technology can do in the future is even more important. Controlling bionic limbs by simply wanting something will become a seamless operation. With this technology in action, people with long-term paralysis may soon regain control of their bodies in ways we've never seen.

As Sorto says in the video, "That was awesome. That was so awesome."