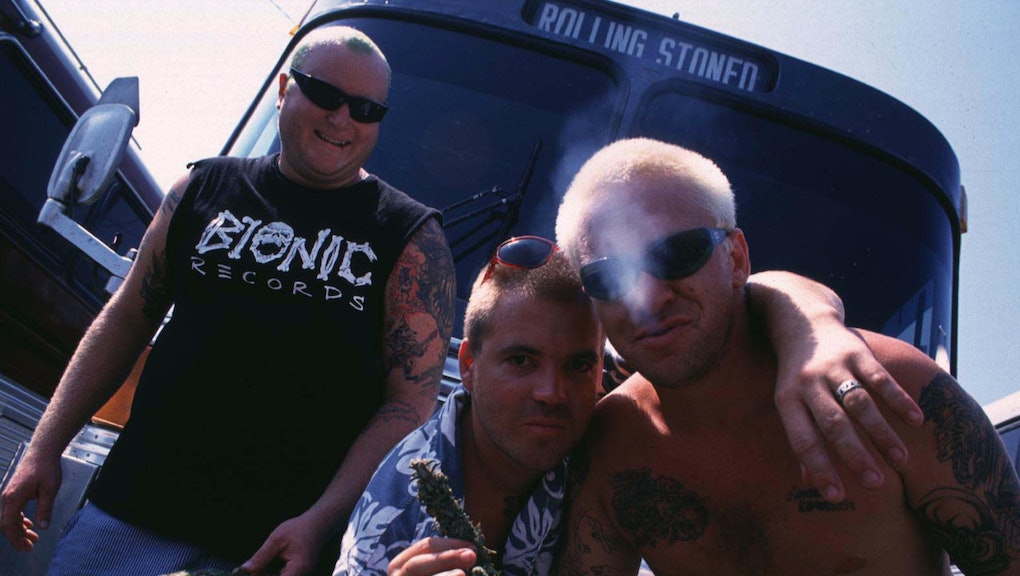 19 Years Later, Sublime's Music Is More Relevant Than Ever

Nineteen years ago Monday, Bradley Nowell, lead singer and songwriter for the '90s surf punk band Sublime, was found dead in a San Francisco hotel room. The band found Nowell, who was 28, lying on a bed with Lou Dog, his beloved dalmatian and the band's mascot, whimpering by his side. He became yet another tragic heroin casualty in rock 'n' roll history.

But while the ska-tinged California punk sound Nowell pioneered has fallen out of vogue, his songs remain relevant as ever. Sublime is nostalgically remembered as a stoner party band, but so many of Nowell's songs dug far deeper. His music dealt with many of the same social issues we face today — including police brutality, addiction and marijuana legalization. The unflinching and sharply satirical eye Nowell offered these subjects should serve as a model for generations of songwriters to come.

Scrappy start: Nowell and Sublime got their start in the scrappiest, most punk way possible — by stealing studio time. They allegedly recorded their debut album, 40oz. to Freedom, by sneaking into studios at California State University, Dominguez Hills. Signs of social consciousness were evident from the beginning, but by their third record and major label debut, they were well past their party rock days and were including sharp social and political commentary throughout their laid-back slacker anthems.

"April 29, 1992" shares its title with the date of the 1992 race riots in Los Angeles and around the country, after the verdict was handed down on Rodney King's 1991 beating by police. The narrative is anarchic, but in the midst of the chaos, Nowell made a powerful statement about  police brutality and racism: "They said it was for the black man / They said it was for the Mexican, and not for the white man / But if you look at the streets it wasn't about Rodney King / It's bout this fucked up situation and these fucked up police."

It's advice to look to the systems that create racist policing — to look beyond the individual events. And it's advice we can all take to heart as we look to push today's anti-police brutality movements into more productive territory.

Nowell wove in grim illustrations of his own struggles with addiction and depression. On "Garden Grove," the album's opening track, Nowell sings: "Getting hassled by the man / Waking up to an alarm / Sticking needles in your arm / Picking up trash on the freeway / Feeling depressed every day."

His songs offer some of the some of the more uptempo depictions of depression in music. In their quirky way, they push back against the stigma of depression that cause so many to suffer in silence — biases many musicians still battle in their music. His stories of addiction, like "The Ballad of Johnny Butt," shed light on a tragically overlooked and consistently stigmatized community.

But the band had a healthy take on other drugs. One of the causes the band championed above all else was legal weed. Sublimed popularized some of the most memorable stoner anthems of all time, including "Smoke Two Joints," "What I Got" and "Burritos."

But it wasn't just about getting high. They offered conscious elements to their weed talk. In contributing to the first Hempilation, a compilation CD benefiting the National Organization for the Reform of Marijuana Laws, they performed "Legalize It," Peter Tosh's conscious stoner anthem. "Doctors smoke it, lawyers smoke it / Sound guy smokes, even my dog tokes it," Nowell sings riffing on the lyrics, before touting its medical benefits: "Only cure for glaucoma / Only cure for asthma."

In 2013, Sublime drummer Bud Gaugh discussed his hopes that the band had a positive impact on the legalization movement, with Celeb Stoner. "I sure would like to hope so," he said. "It's a shame it's criminalized. It is medicine. I've got two friends who've got cancer right now. They need it!"

Perhaps the saddest part of Nowell's passing is he never had the chance to enjoy the band's mainstream success. He passed before the band's breakout album, Sublime, saw its release. But the music Nowell wrote left its mark.

"His voice is like candy to your ears," Gwen Stefani, the lead singer of No Doubt said in 1996, according to the Los Angeles Times; Stefani had recorded two songs with Nowell. "Bradley definitely had a gift, and it sickens me that I'm not going to be able to enjoy his voice anymore. It's not sad for him — he's gone — but it's sad for everybody else. He had such a huge impact on so many people in the whole [local music] scene."

"Sublime endure because of the way, lyrically, Brad would make you feel," Miles Doughty, the lead singer of Slighly Stoopid, a band that has continued to push Sublime's mixture of ska, punk and dub, told OC Weekly in 2013.

"Just like Nirvana helped to change from the hair-metal stage to the grunge rock of the '90s, Sublime did the same thing, changing the whole grunge sound ... When you're a musician like that, it's timeless; it'll last forever." There's far more to that legacy than most people realize.