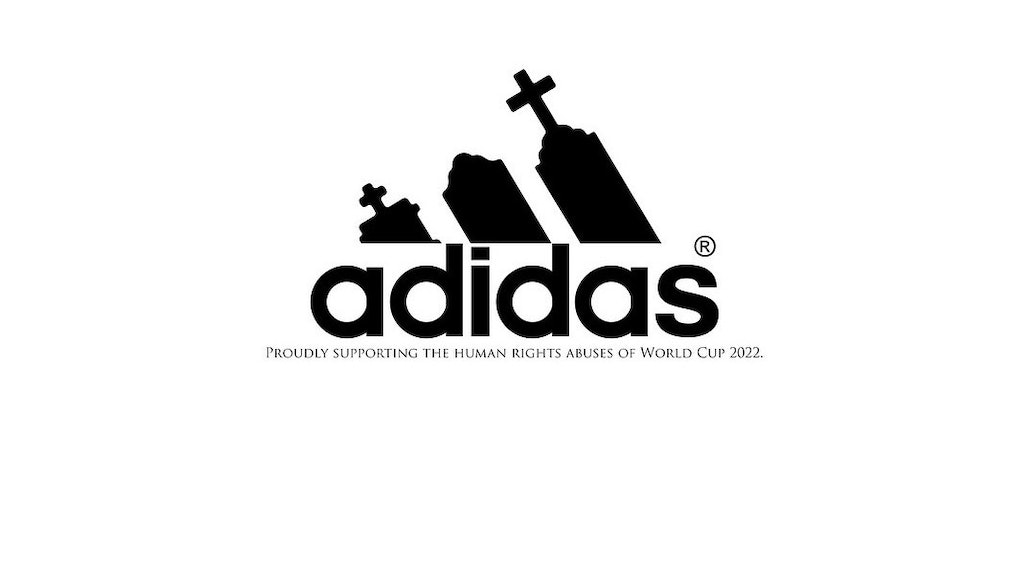 Corporate sponsors are continuing to pour hundreds of millions of dollars into FIFA sponsorships, overlooking the grave threat to the foreign workers toiling under slave-like conditions in Qatar to build stadiums for the 2022 World Cup.

According to the Guardian's Marina Hyde, Playfair Qatar alleges that about 62 workers will die for every World Cup match actually played.

This image, posted to Reddit by user TbrendanM, captures the seeming hypocrisy of corporate endorsements of the World Cup given this horrifying human rights situation:

The background: On Wednesday, Amnesty International released a scathing report on the Qatari government's treatment of migrant workers hired to construct stadiums and prepare venues for FIFA's 2022 World Cup. One year after Qatar promised to improve conditions for 1.5 million migrant laborers under intense international pressure, Amnesty found that almost none of the promised reforms had been implemented.

According to statistics compiled by advocacy group Playfair Qatar, 1,420 foreign workers lured by the promise of steady work died in Qatar between 2012 and 2014. That is nearly 40 a month, putting Qatar on track to reach over 4,000 deaths by the time the games commence. Since their estimates only take into account workers from Nepal, India and Bangladesh, the true death toll may be higher. Countless other workers are feared injured.

Migrants who come to Qatar often find themselves trapped by the country's kafala system, which allows employers to withhold travel visas from foreign workers for as long as they see fit. In some cases, workers are not allowed to leave Qatar for years after their originally expected date.

Pay is low and the workers are kept in slave-like conditions, with workers beginning as early as 4:00 a.m. each day and working until evening under intense heat. Migrants tell the BBC that they are often forced to live together with 10 or more colleagues and are never granted basic privileges like days off or air conditioning. Safety controls on the sites are nearly nonexistent. According to Amnesty International, many workers have complained that they were either paid only partially or not at all.

Yet Adidas, among other large corporations, continues to sponsor the 2022 World Cup. The sporting goods company, along with other deep-pocketed companies like Visa and Coca-Cola, recently stated that it was concerned about conditions facing the workers. Yet in its statement, Adidas alluded to "significant improvements" of the kind Amnesty International's report says simply don't exist. (Whistleblowers have alleged that FIFA granted Qatar's bid due to outright bribery, which would make their lack of action unsurprising.)

Unfortunately, Bloomberg Business' Ira Boudway writes that a death toll in the thousands is unlikely to dissuade corporate sponsors from continuing to invest in the tarnished but extremely profitable games.

"By the time the matches begin ... the intense interest of the largest global audience in sports usually overwhelms any negative associations," Boudway opines. "Sponsors absorb the routine bad press about construction delays, corruption, and misspent funds — and then share in the glory of last-minute goals and deliriously happy crowds."