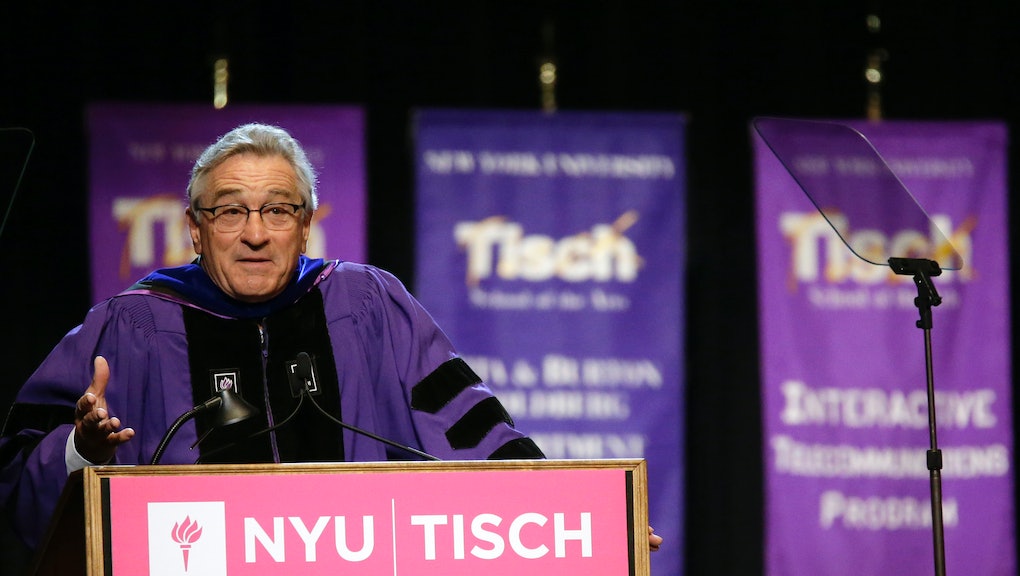 Legendary actor Robert De Niro delivered a harsh, raw and hilarious speech to graduates from New York University's Tisch School of the Arts on Friday, telling the newly christened degree holders of the difficulties they will face in the job market but that beyond the hard times they will gain the joy of a "passionate" life.

"Tisch graduates, you made it," De Niro began. "And you're fucked."

De Niro discussed the better job prospects awaiting graduates from medical, legal and accounting schools among others, telling the Class of 2015 that those people had made a calculated decision to pursue an economically viable way of life.

But as he added, by pursuing a career in the arts the Tisch graduates had discovered both an illimitable passion for creative expression and an ambition greater than others'.

"You discovered a talent, developed an ambition, and recognized your passion," De Niro said. "When you feel that you can't fight it, you just go for it. When it comes to the arts, passion should always trump common sense."

He even had a good quip for the graduating class on how to properly deal with the unavoidable feelings of defeat they will encounter while pursuing their artistic goals.

"A new door is opening for you," he said. "A door to a lifetime of rejection. It's inevitable. It's what graduates call the real world. How do you cope with it? I hear that valium and vicodin work."

"Without the pain, what would we talk about?" De Niro continued. "Though I would make an exception for having a couple of drinks, if hypothetically, I had to speak to a thousand graduates and their families at a commencement ceremony."

De Niro also spoke about his experiences as an actor and fellow traveler in the arts, striking a perfect balance between tongue-in-cheek truth-telling about the realities of life as an artist and reassurances that the world can be good to them too, if they just pursue their passions.

While everyone deserves De Niro at their graduation ceremony, most of us will just have to settle for watching the full speech below: