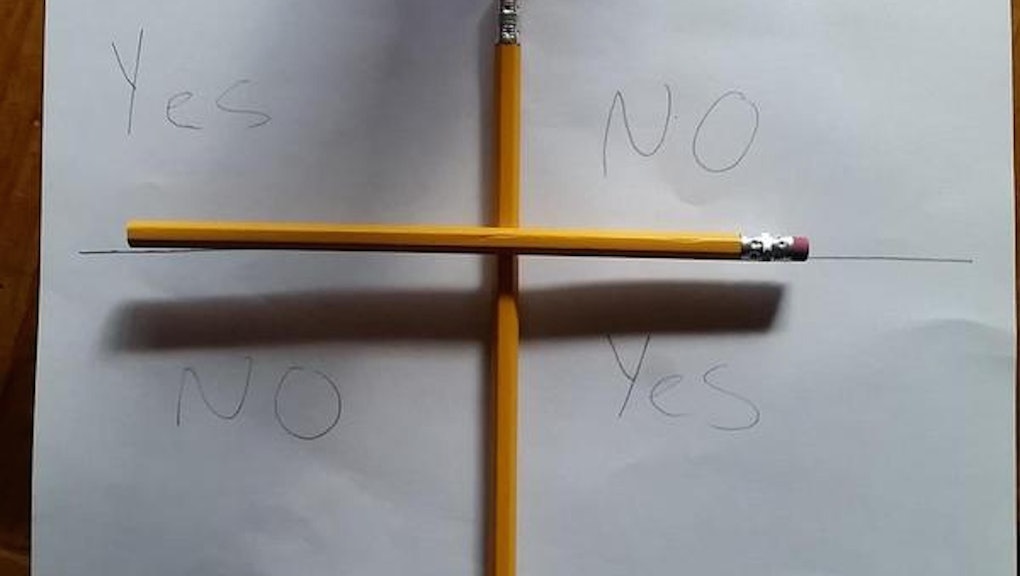 If you spent your Memorial Day weekend sitting by the grill and soaking up the sun, you missed out on the #CharlieCharlieChallenge, the latest social media fad to sweep the Internet.

The premise is simple. You take two pencils and place them on top of each other to form a cross. Then you write "yes" two times and "no" two times so the matching words sit diagonally across from each other, like so:

Because of the way the pencils are balanced, the top pencil will probably move at some point, and "Charlie" — purported to be the spirit of a Mexican demon — will choose whether he deigns to answer. If he does, players can ask all kinds of questions to gain some wisdom from him. (Or to scare themselves into oblivion.)

Where did Charlie come from? "Charlie, Charlie" is also known as the Pencil Game or Six Pencils. It's been described online as an ancient ritual, but that's unconfirmed. People have been talking about it on the Internet for about seven years. Variations of the game surfaced on YouTube as early as 2008.

Also in 2008, a YourGhostStories.com user published a story called "Pencil Game Demon" about some friends who connected with a ghost named Charlie, a child who died of abuse. Charlie haunted them, scratching bathroom doors and cackling while they slept.

People began flocking to Yahoo Answers in 2011 to ask about the game.

Back in January, Pencils.com reported on a slightly different version of Charlie, Charlie, in which six pencils arranged in a rectangle move when the "Charlie, Charlie" chant is uttered. "Some kids have talked about strange things happening after playing this game, like seeing shadows or hearing a child's laughter. Others didn't experience anything at all," the site declared.

Unlike the #Gameof72 challenge, the popularity of which was largely blown out of proportion, the #CharlieCharlieChallenge appears to be a full-blown trend. The Twitter hashtag is highly active; on Instagram, #charliecharlie has over 36,000 posts, and #charliechallenge has over 27,000. News headlines trumpet its popularity, priests decry its Satanic origins, fanfiction writers compose Charlie stories and advice is being given to stamp it out of your newsfeed.

Take a look at what the kids are talking about:

Given Charlie's popularity, it was almost inevitable that it would become meme-ified. Other, more humorous versions have popped up, including using beer, chicken and people in place of the pencils:

Others have nudged Charliers toward the light:

And still others have somehow managed to bring One Direction into it:

Never change, teens of the Internet.