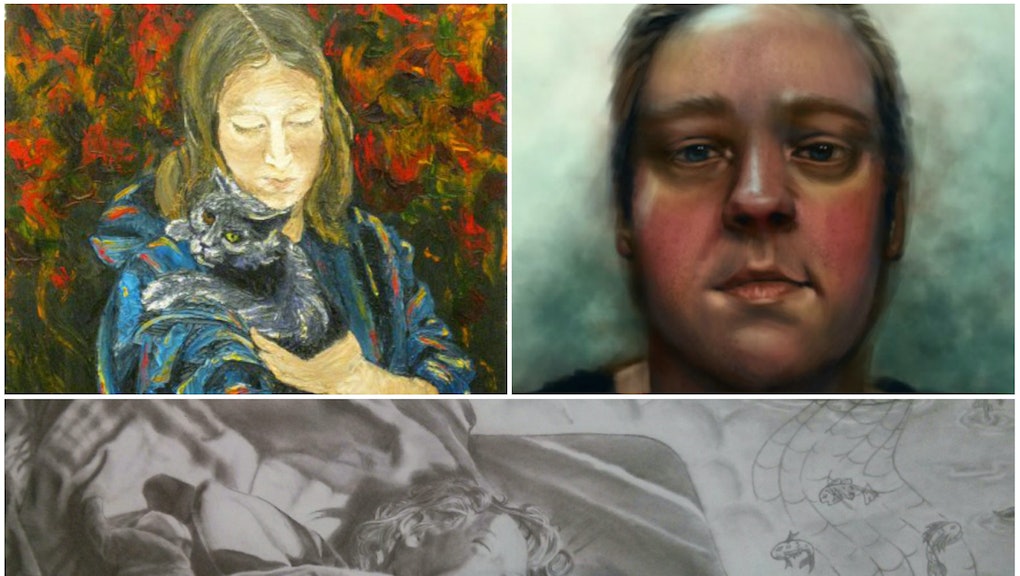 Autism is a buzzword surrounded by a slew of misconceptions. Young people with autism are far more likely to be misunderstood and bullied in school. They often end up being caricatured through Rain Man-like Hollywood stereotypes. And the narrative is often dominated with the statistic that 1 in 68 people born autistic are not capable individuals. But this is a myth.

Many who are on the spectrum are simply wired differently. And there's one thing that advocates want everyone to be more aware of: the immense amount neurodiversity, and the value of being autistic.

Last month, the Art of Autism concluded an incredible online series called Autism Unveiled. It's a collection of visual art and experiences from people with autism, from all over the world, that sheds a powerful light on participant's inner emotions, thoughts and capabilities. It tells a very different story about what living with autism is like than the one that's made its way through popular culture.

"The most important thing is that we all have diverse experiences," Debra Muzikar, the co-founder of Art of Autism told Mic. "We need to appreciate other people for who they are as human beings."

What follows is a collection of self-portraits and quotes in Autism Unveiled that pull back the curtain on what it really means to live on the spectrum.

Myth: Autism makes it impossible for kids to achieve their potential.

Many people with autism view it as a special part of who they are.

"The world would be drab if we were all the same," writes Jeremy Sicile-Kira, who also has synesthesia, a condition where senses mix, like seeing colors while listening to music, because of differences in brains wiring. Research shows that people with autism are almost three times more likely to have synesthesia.

"Really, if it were not for my autism, I would not see the beautiful colors that I see everywhere, even in dust," he writes.

Myth: Being on the spectrum has no benefits.

Research shows that many people with autism have unique abilities, whether it's incredible pattern recognition or attention to detail, compared to the general population.

Nik Sebastian is an artist living in Pennsylvania who specializes in faces. "Details like laugh lines, moles and supposed imperfections ... are more beautiful to me by far than any airbrushed Hollywood star," he writes. "I feel that autism is what allows me to see minor details that most others don't seem to notice."

People on the autism spectrum actually process emotion and sensory inputs quite intensely — it's just how they process them is different.

"It's not that I don't understand something, it's that I don't know how to respond to it," writes Amanda LaMunyon.

LaMunyon, who lives in Oklahoma, started painting when she was 7 years old, a year before she was diagnosed with autism spectrum disorder. Research shows that people on the spectrum actually have intense emotional experiences, it is just their coping strategies — how to deal with those emotions — that can be difficult. But they are anything but emotionless.

Myth: People with autism aren't aware of how others see them.

People with autism can be greatly affected by others' lack of understanding.

"One of the biggest challenges I face is the view of autism held by many people I meet," writes Kati Mills. "It shocks people that I am happy with my neurology."

Mills, who lives in Arizona, titled her self-portrait "Secrets." When she was younger, she struggled socially. It was only as she got older and found a social group that understood and accepted her that she began to feel less alone in the world and became proud to be part of the autistic community.

Myth: People with autism are unemployable.

Valuing neurological diversity in the workplace and the unique potential of people on the spectrum is an idea that advocates believe deserves greater attention.

"We have thoughts, feelings and ideas, and we have gifts to share," writes Kateri Michaels (who uses a pen name).

Michaels drew this self-portrait at 17. She writes that she often keeps her diagnosis private, concerned that it will negatively affect how people see her professionally (Michaels is an optometrist). Research shows that people with autism spectrum disorder face can face major employment hurdles and discrimination.

Myth: Autism is just a disability.

"Autism is not a disease, and autistic people are not mentally challenged," writes Aarti Khurana, whose daughter, Amrit, has autism.

Khurana describes how, when her daughter was first born, she hoped they would have a conventionally normal life. But as the first few years went by and her daughter never spoke, she worried that that would never happen. In time, she realized that everything she was experiencing with her autistic daughter was normal. It was just a different kind of normal; it was normal in the world of autism — and that was just fine.

Myth: Autism is something that desperately needs to be cured.

While autism comes with its difficulties, it's not something that many people would want to be cured of.

"Society's inability or refusal to understand us does not make us broken," writes Chelsea Dub. "To 'fix' my autism would radically change who I am."

Dub, who attends Ball State University, describes how she felt incredibly alone growing up, and that, as she grew up, many people misunderstood her different way of thinking as deficient. Many advocates aren't looking for a cure for autism. Rather, they want people to prioritize recognizing the value that people on the spectrum bring to our culture.

Myth: Autism is a condition that some people just have to bear.

Autism isn't necessarily something people are suffering through.

"My autism makes things shine," writes Mike Allcock. "Playing the piano makes me very happy... Playing Beethoven is like your feelings — all of them — exploding."

Allcock, who is 16 and from the U.K., was non-verbal until he was 10. According to his bio, he was first diagnosed on the spectrum at 2 years old. His parents were told to put in him in a special education program and that they shouldn't expect much. Now, Allcock is an accomplished pianist, and a year ago, he started painting for the first time.

It's past time to let the myths and misconceptions about autism go, and help other people know what it really means to be autistic — what it means to just be unique and different.