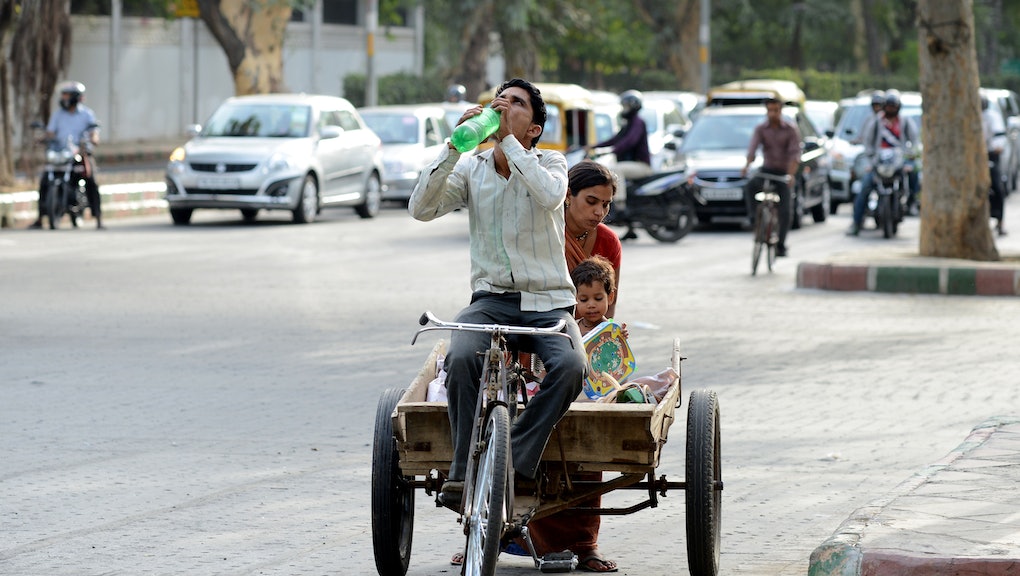 More Than 1,100 People Have Died in India's 118-Degree Heatwave That's Melting the Roads

India can be a hot place, but a heatwave gripping much of the country through the month of May is especially bad this year.

Temperatures in the capital city of New Delhi reached 118 degrees Monday. The mercury climbed so high, locals on the ground reported the streets of the metropolis were melting.

More seriously, the heat has resulted in more than 1,100 deaths mostly among the elderly, construction workers and the homeless, the Hindustan Times reported.

In other parts of the nation, temperatures were hotter still. In the country's south-central Telangana state, where more than 200 died of related ailments over the weekend, thermometers topped out at 118 degrees.

It's not just roads that melt when temperatures climb past 110. To put things in perspective, at 115 degrees, you could serve a rare prime rib with fat melting off the bones; yeast will dissolve and chocolate will scorch.

The almost biblical heat that has descended on India is in a different league to "heatwaves" that have hit America in recent years. The hottest day ever recorded in New York was a steamy 106 in 1936, was memorialized by the New York Times:

"In the great shopping districts in the Thirties, the pavements became so soft in late afternoon that the crosswalks were dotted with rubber heels that were caught in the asphalt and tar as women passed by. ...In Syracuse, on one of the main streets, a housewife fried an egg on the pavement; at Perry, N.Y., an absent-minded man who left his false teeth on the window sill returned within an hour to find them melted away."

New Delhi, a city of 18.2 million people, has seen higher temperatures than this for the last five days. Locals did what they could to beat the heat, with a common thread emerging in photos posted online.

The unprecedented heat raises new questions about the impact of global climate change. While it is impossible to definitively link the phenomenon to the Indian summer, what is known is the Earth is getting warmer.

Scientists declared 2014 to be the hottest on record, while the next nine warmest years have all come since 1998. Many of the most vulnerable populations who played a marginal role in contributing to climate change will bear the brunt of its effects. An Organization for Economic Cooperation and Development report found, "while climate change is a global phenomenon, its negative impacts are more severely felt by poor people and poor countries."

Heatwaves don't always get as much attention as more visual natural disasters like earthquakes or volcanic eruptions, but they can be just as destructive and just as deadly. India's heatwave is a wake-up call to the entire world about the danger these events can pose.