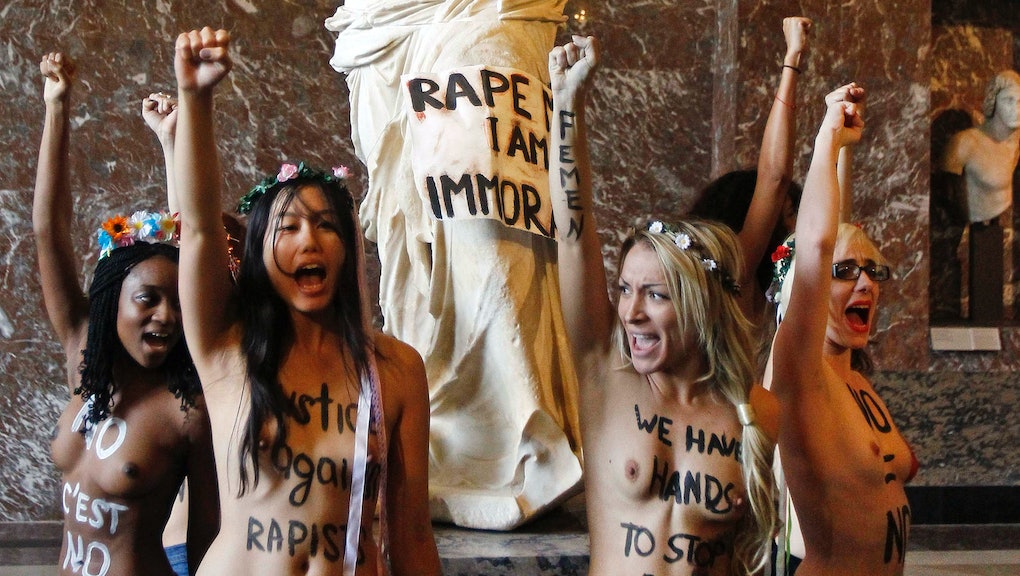 The #FreetheNipple movement in the U.S. and topless activists of FEMEN in Europe have captivated the world with their recent bare-breasted demonstrations. Just last week, women dropped their tops in the name of police brutality that black women face across the U.S.

But a quick look into the past reveals there's nothing new about topless protests. In fact, they're part of a strong legacy of woman-centered activism.

Nearly 90 years ago in Nigeria, women protested British imperial rule and local chiefs' compliance through body activism, which included what we would refer to today as topless protests.

The Women's War in Southeastern Nigeria began in 1929, but its methods continued in colonized areas in Africa through the 21st century. OkayAfrica's Maryam Kazeem declared this war as "arguably one of the most powerful manifestations of naked protest over the past century" because it lashed back at centuries of colonization and racial stereotypes of black women's bodies.

Even though dozens of women died during the two-month war of 1929, Nigerian women used their bodies as a powerful way to counter sexism, imperialism and oppression.

The history: After over a hundred years of British colonization, the war officially began on November 23, 1929, according to National University professor Lorna Lueker Zukas. Instead of harming other people, women blocked roads and "knocked down telegraph polls and severed wires," Zukas wrote. "Colonial administrators, failing to understand women's traditional practices and trade and communication networks, dismissed the first actions as crazy acts by hysterical women. In multiple provinces women set fire to Native Court buildings, some destroyed property, chanted threatening songs, and organized customary 'sitting on' to embarrass African warrant chiefs who aided colonial administrations or who were corrupt."

Nudity as protest: Western Christian ideals aligned nudity with immorality. This meant that white colonizers castigated black female bodies, and then legally enforced clothing laws. Colonizers enforced "their own superiority by branding these women in their own clothing and removing" their own cultural traditions, as the blog Naked In Africa noted.

Nigerian women, and countless African and black women after them, concluded that their bodies functioned as the most powerful tools to protest white imperialism and patriarchy. "Protests of African women when using their bodies and femininity as a tool against the aggressor remains a proven and powerful tool for change," Naked In Africa concluded.

Topless protest is more than just spectacle. It's a confrontation of restrictions placed upon the female body. Just ask the women who protested last week in solidarity with other black women who have been killed or died at the hands of police.

Nearly a century after the women in Nigeria protested though shedding their clothing, black American women stood up in protesting the hypersexualization of black women's bodies and gender-based violence.

What do you think?