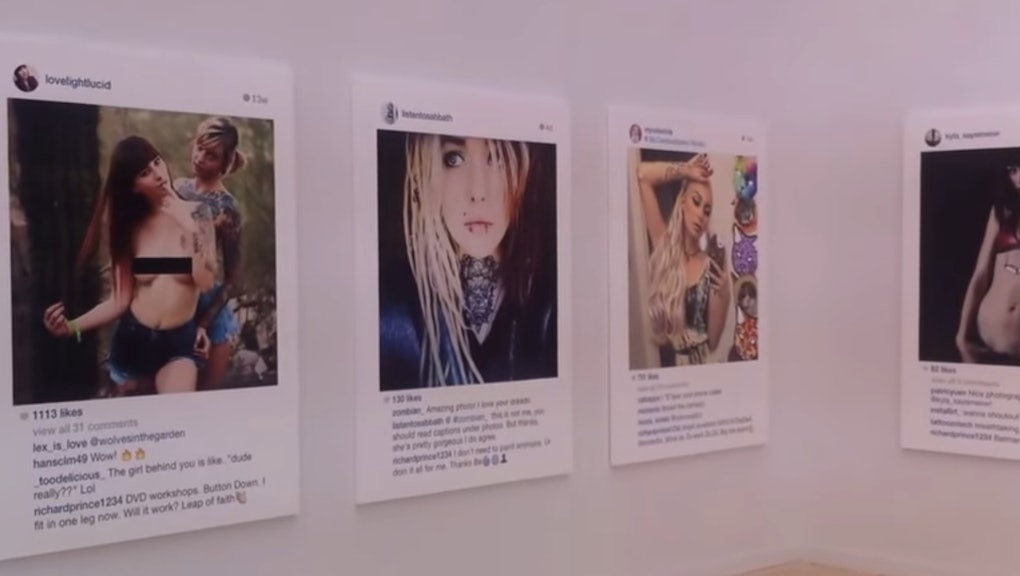 This Artist Took Someone Else's Instagram Photo — And Sold It for $90,000

At a high-end gallery show in New York City, prominent photographer and media appropriator Richard Prince sold a series of 6-foot-tall inkjet prints of Instagram photos that weren't his, without asking for the owners' permission. Some of the prints sold for as much as $90,000.

Doe Deere, founder of Lime Crime Makeup, spotted her own photo on sale in the gallery.

The caption on the photo:

Figured I might as well post this since everyone is texting me. Yes, my portrait is currently displayed at the Frieze Gallery in NYC. Yes, it's just a screenshot (not a painting) of my original post. No, I did not give my permission and yes, the controversial artist Richard Prince put it up anyway. It's already sold ($90K I've been told) during the VIP preview. No, I'm not gonna go after him. And nope, I have no idea who ended up with it!  #lifeisstrange #modernart #wannabuyaninstagrampicture

Seems sketchy? Consider these words: fair use. The argument Prince could make in his defense (and has before) is that he's modified the original work just enough so that he's created something original.

And this battle over who owns content posted on social media platforms is nothing new. In fact, it's inherent to the public nature of the platforms themselves.

Facebook has come under fire for policies that state the company has universal ownership of all content posted on the platform. This surfaces in rumors that Facebook takes user photos and uses them in brand advertisements, but Facebook categorically denies this practice, even if, given the terms of service, Facebook could easily do so.

Deere says she won't go after Price for copyright infringement. Price has been slightly altering and reselling other people's work for decades, yet has never been successfully sued for it.

This is how the Internet works. In the online world, there are dozens of parties who can profit — monetarily, or otherwise — from public postings.

Take Twitter, where celebrities and brands dig through the timelines of teens to steal their jokes, images and slang so they can repurpose it for their brands.

Comedians like Sammy Rhodes and Josh Ostrovsky have racked up tens of thousands of followers — and they've been criticized heavily for stealing other Twitter users' jokes. You can't sue someone for repeating a joke on Twitter that he heard somewhere else.

There are news organizations that embed public tweets to add texture to their own stories. It's almost impossible to write this article without doing so ourselves.

As long as are a citizen of social media, you are fuel for someone else's profit — whether it's Facebook, Twitter or Price.